Senior Jonathan Gootenberg won a gold medal by placing 21st in the gold division at the 19th annual International Biology Olympiad (IBO), held in Mumbai, India from July 13 to July 20.

Over 220 students from 55 countries competed in the IBO, one of the world's most prestigious high school biology competitions. Participants were given examinations that covered biology topics ranging from plant physiology to molecular biology. The two-day exams included a practical section, which lasted for four hours, and a theoretical section, which amounted to four and a half hours of testing.

In order to compete in the IBO, Gootenberg first had to qualify at the USA Biology Olympiad (USABO) to become part of the four-person United States team. After moving past the USABO Open and the USABO semi-final round, Gootenberg was named a finalist along with nineteen other participants. The twenty finalists then went on to a two-week training camp at George Mason University, where they took practical and theoretical examinations to compete for the four spots on Team USA. The top four scorers on the exams were Gootenberg, Thomas S. Wootton High School senior Jonathan Liang, Seungsoo Kim and David Huang, who all went on to represent Team USA in the IBO competition. 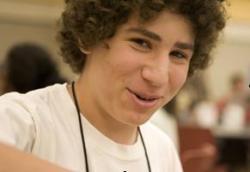 This year, Team USA, juried by William Taft Stuart and Jim Saunders, ranked third in the world at IBO. In addition, all four team members received individual gold medal awards - given to the top ten percent of achievers - for the second straight year.

Gootenberg, who is in Blair's Magnet, was pleased with Team USA's performance, as well as his individual achievement. "I feel really good. I was not expecting a gold, so I was really, really happy," he said.

His teammate Liang, who placed third in the gold medal division, was also surprised about his individual win. "That was a shock, a total shock. I didn't expect to get a gold medal, let alone third place," Liang said.

Stuart, the founding director of USABO and a professor of anthropology at the University of Maryland, is optimistic about the future of the team. "I am hopeful that the USA will continue to be represented at IBO competitions and that we will be able to maintain, indeed improve, on our selection process, including the quality of the final round of USA Biology Olympiad training and testing," he said.

Joann DiGennaro, president of the Center for Excellence in Education, the organization that sponsors USABO, was especially impressed by Team USA's accomplishments this year. "I am very happy with the performance of Team USA at the International Biology Olympiad, particularly because this team was made up of three juniors and a sophomore," DiGennaro said, referring to the grade they were in at the time of competition. "The center is extremely satisfied with the four gold medals, which represent excellence among the highest achievers in biology in the world."

Both Gootenberg and Liang are still eligible to participate in next year's IBO competition and are considering returning to the competition. Liang believes it will be difficult for him to improve upon his results after his third place finish this year. "I'm still thinking about it," he says.

On the other hand, Gootenberg plans to compete. "I am planning to enter. I know a lot of people who win gold don't return, but I think I will. And I hope to do better," he says.