On Nov. 20, Invisible Children Inc., a non-profit organization that brings awareness to conflicts in war-torn Northern Uganda, showed the documentary "Go" to Blair students during 5A and 5B lunches. Senior Kathleen DaCruz along with Students for Global Responsibility (SGR) organized the event, which was estimated to have a turnout of more than 500 students in each lunch period. 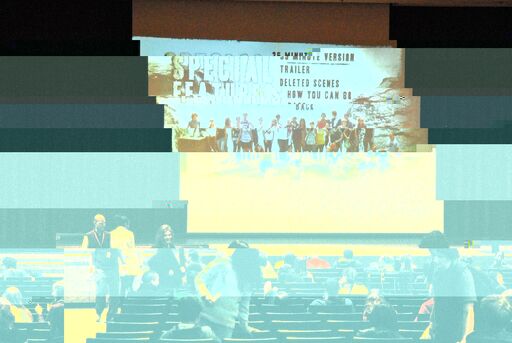 Photo: Invisible Children returns to show what has happened since last year.

Photo: Invisible Children returns to show what has happened since last year.

The event started with a showing of "Go," a film that followed winners of Invisible Children's "Schools for Schools" (S4S) project. S4S is a nationwide competition among 1,400 schools to raise money towards rebuilding 11 war-torn Ugandan schools. Schools that raise the most money towards their assigned Ugandan school can send one representative to northern Uganda over the summer. The film showed "the several winners' experiences in Uganda, where they came from, where they went and how the experience changed them," Invisible Children representative John Beaton said.

Blair is currently registered in the S4S competition, and will raise money for the Samuel Baker Secondary School in Uganda, according to DaCruz. Within Blair, there will be an additional competition to determine who can individually garner the most donations. "The person who raises the most money will get free Invisible Children merchandise," DaCruz said.

SGR president Emma Kaufman believes that the S4S fundraiser will be a great way for Blair to "collectively unite as a group," and push Blazers to be more involved in the Invisible Children cause. "Everyone at Blair responded so much to Invisible Children last year, so we want to keep the ball moving," Kaufman said. SGR already has plans to set the stage - all money generated from the annual SGR Spectacular will go towards S4S, according to Kaufman. 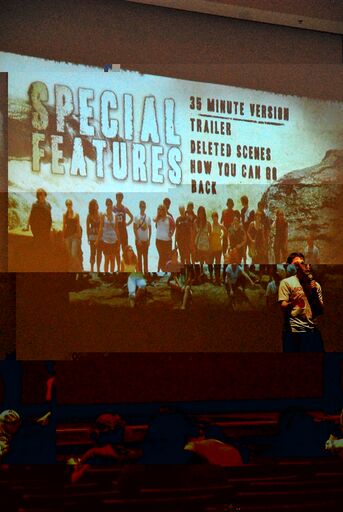 Blair hosted the organization for a second time upon a request by DaCruz. "I contacted Invisible Children through their website, wanting them to show us a plan of action," she said. By DaCruz's request, Invisible Children stopped at Blair on their East Coast "Rescue and Recovery" tour, which ends on Nov. 21 and covers schools from Buffalo, N.Y. to Washington, D.C., according to Invisible Children representative Matt Molcjan.

Aside from promoting the S4S campaign, SGR also handed out slips to all students and teachers who attended the assembly, petitioning the need for President Barack Obama to lead an international effort to arrest Joseph Kony, help to rehabilitate LRA-affected communities and implement the LRA Disarmament and Northern Uganda Recovery Act of 2009. This week, Invisible Children gained the support of 12 senators for the bill, adding to the 170 members of Congress who co-sponsored the LRA Disarmament Bill, according to Beaton.

SGR sponsor George Vlastis praised Blazers' involvement with Invisible Children, as well as the organization's ability to reach teenagers. "It raises a lot of issues about places around the world where the people involved are the age of high school students," he said. Beaton was also impressed by Blair's student interest. "The energy I see in students is very inspiring," he said.

The assembly ended with Beaton and DaCruz encouraging Blazers to take action. Beaton advocated for gathering friends and family to watch Invisible Children films and sending letters to people in power. DaCruz also promoted the S4S campaign and encouraged students to "be a part of the solution."

Kaufman also hopes that the assembly increased activism in other Blazers. "The world is waiting. All you have to do is carry it," she said.