On Thursday, May 12, the Blazers took advantage of a dominant, complete-game pitching outing by senior pitcher Yasha Van Praagh and eliminated the Wheaton Knights in the regional quarterfinals. He cooled off the Wheaton bats, giving up one unearned run on four hits and no walks with eight strikeouts over seven innings and 81 pitches.

On the offensive side of the ball, the Blazers put together quality at-bats. The Blazers got the scoring started off a sacrifice fly to right from senior first baseman Emmanuel Kraft.

But the night was punctuated when junior Evan Hunt demolished a skyscraping fly ball that one-hopped over the fence in deep right field for a two-run ground-rule double. If the ball bounced off the wall and back in play, it would have been at least a triple. 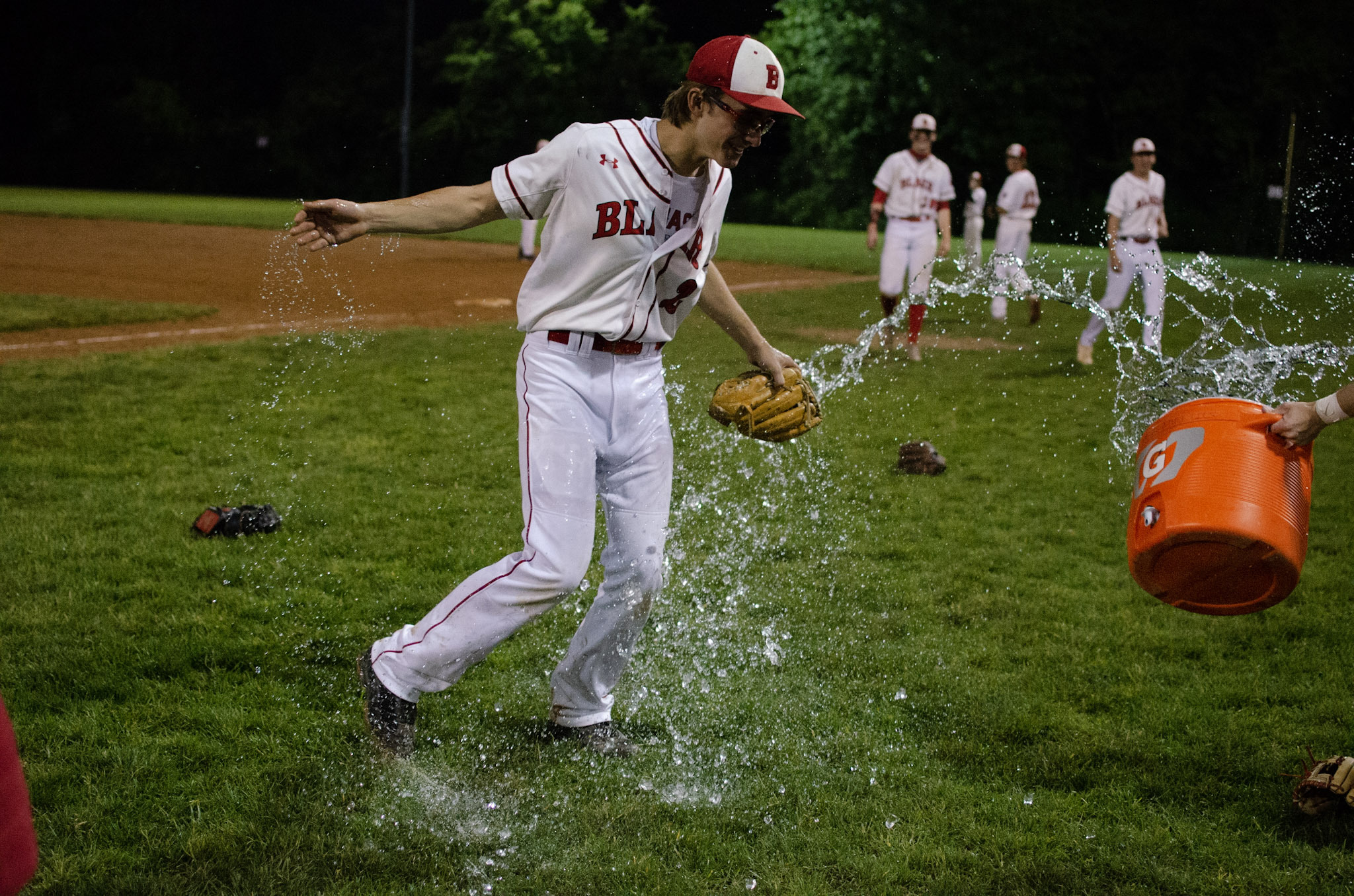 Photo: Senior pitcher Yasha Van Praagh gets doused with ice-cold water after his ice-cold performance against Wheaton in the playoff opener

Photo: Senior pitcher Yasha Van Praagh gets doused with ice-cold water after his ice-cold performance against Wheaton in the playoff opener Photo courtesy of Cal Tobias.

Hunt's electrifying hit wasn't the only extra-base hit the Blair offense put up. Senior outfielder Andy Merrill smacked a triple to right field to score a run, delighting the fans and the Blair bench.

Head coach Kyle Wannen thought Van Praagh's success was because of his gameplan. "He was really throwing the sinker inside and working the breaking ball down and away, so he had a plan facing these guys, and he stuck to that plan throughout all seven innings," he said.

Junior outfielder Brian Robinette said he knew this type of performance is in Van Praagh's capability. "He's a dawg. I mean, that's Yasha. I expect nothing less."

Coach Wannen says this game is a sign of things to come for Blair. "Just know that we can keep doing this. This is six in a row for us and I think we've found a formula. The formula is make easy defensive plays, throw lots of strikes, and then get some good hits. You don't have to put up 11,12 runs to beat a team. We can win games 2-1, 3-2, close games because we have the pitching for that."

Blair's next game is on Saturday at 1 p.m. at Blake. It will be the regional semifinals.

Jonas Laufer. Aside from being a co-editor of the photo staff, I'm in the CAP program and a private pilot. More »