Two days ago boys varsity soccer played one of their worst games in recent memory. A 0-6 loss to Sherwood had highlighted every fault in the team, from a general lack of cohesiveness to a simple inability to move the ball up the field effectively. In the first half of tonight's 3-2 win against Quince Orchard, Blair seemed to be following that same path. Simple errors, poor play, and unfortunate luck were all going against the Blazers for the first 60 minutes of the game. Fortunately, the team was able to come together early in second half with a new resolve and offensive prowess, bringing the teams record back to .500 at 2-2. 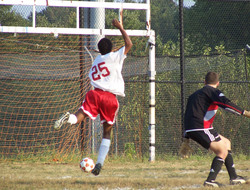 Photo: Senior Bereket Abebe scores the first goal of the game against Quince Orchard on September 22.

Photo: Senior Bereket Abebe scores the first goal of the game against Quince Orchard on September 22.

The beginning of tonight's game was filled by poor play and bad luck for the Blazers. Ten minutes into the game junior defender Ethan Kuhnhenn accidentally touched the ball with his hand—while inside the goalie box. Quince Orchard converted on the resulting penalty kick to make the score 1-0. Blair responded later in the half with goal from forward senior Bereket Abebe. Abebe chased down a long pass and was left one on one with the opposing goalie. Abebe lured the goalie out several yards, pulling the goalie out of position and shot a low ball into the net to tie the score 1-1.

Abebe's goal helped to level the score, but Blair was unable to put any other serious scoring opportunities together in the first half. Senior captain Mac Kpadeh said after the game, "we were not possessing the ball, something we are usually good at." Kpadeh continued, saying that a lack of good passing limited Blair's offense in the first half. "We weren't passing well, the passes were sloppy and not really doing anything."

Blair's poor luck continued early in the second half when senior co-captain Adam Macleod was injured in a collision with a Quince Orchard forward. Macleod was removed from the game, and back-up goalie junior Matt Mclain was put in his place.

After Macloed's removal, Blair greatly improved their play, mostly as a result of junior Lamboni Yendoukoa. Yendoukoa was substituted in during the second half and his quick speed had immediate results. His most obvious contribution was his assist on Abebe's second goal of the game close to half-way through the second half. Yendoukoa's play was characteristic of Blairs general improvement in the second half. In the second half "we definitely played more aggressively. We were also able to spread around the ball more," said Kpadeh.

The more accurate and widespread passing on offense kept Quince Orchard on their heels for the rest of the game as Blair scored again on a goal from senior Patrick Beckford. Beckford took an amazingly powerful shot from around 30 yards out that at first seemed destined to go over the crossbar, but dipped down after passing the goalie to make the score 3-1. Quince Orchard scored with less than seven minutes left in the game off of a direct kick outside of the box to bring the score to 3-2. The goal however seemed irrelevant as Blair was in clear control of the game during the second half.

Blair's defense was solid today except for the early mental error by Kuhnhenn. Kpadeh felt that the defense played an essential role in today's win. "They played strap down for the entire game. That really helped us." By limiting Quince Orchard's scoring opportunities Blair was able to stay competitive throughout their sluggish first half.

Another positive aspect of tonight's game was the good play of the team without their regular coach. Head coach Adrian Baez missed the entire game due to a family commitment. Marc Grossman took over Baez's position as coach, managing the team well, but the captains were able to keep the team together. "We told earlier in the week the Baez wasn't going to be there today so we were pretty prepared," said Kpadeh.

Overall, this game showed a great contrast between Blair's blowout loss two days ago and today's hard fought win. "On Tuesday we were lethargic. We didn't come out to play, but today every one was able to step it up," said Kpadeh. Kpadeh continued, stating that Sherwood and Quince Orchard were actually very similar teams and that it was merely Blair's effort that affected the outcome of the game.

Blair's next game is away against Blake next Monday at 5:00 p.m.