Coming off of a victorious high after their dominant win over Wheaton last week, the junior varsity field hockey team faced the reality of a much stronger Paint Branch defense. Overcoming disorganization and miscommunication, the Blazers conquered the Panthers 2-0 and lifted their record to 5-2-1.

For the first ten minutes of the game, the air was filled with the voice of Coach Nina Hagan instructing the disorganized Blazers to "slow it down and RELAX!" The team responded quickly to their coach's forceful commands and Blair's midfield took control of the game. This midfield-offense connection set up numerous scoring opportunities, but forwards failed to capitalize on these openings during their rushed frenzy to the goal. 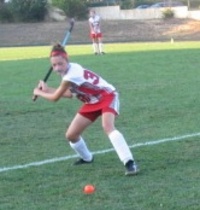 Half way through the first half, the game took a turn for the better when the Blazers unified as a team and dominated the field with successful passing. The Blazers effectively balanced themselves across the field and showed off skillful ball-control and powerful drives.

In this burst of energy, junior co-captain Jenna Craver passed a penalty corner to freshman stand-out Blake Morgan-Gamber, who took control of the ball and quickly drove it past Paint Branch's goalie for the first goal of the game.

Empowered by their lead, the Blazers wasted no time in driving the ball down the field again, with the speed and aggressive play of sophomore Lily Alexander. Within just two minutes of Morgan-Gamber's goal, Alexander received an indirect ball in front of the goal-circle from a Blair penalty corner and drove the ball past Panther defenders for Blair's second unassisted goal of the game.

With a secure lead over the Panthers, Blair's intensity was drastically dampened for the remainder of the half. The Blazers sought control on in the second half on the defensive end as freshman Janet Henkai effectively directed the defense's clears.

Blair's offense stayed active with breakaways and clears in the midfield but the team's defensive focus resulted in a lack of offensive force. The second half ticked by with a majority of the game being fought in the midfield, with the absence of any offensive pressure from neither the Blazers nor the Panthers.

In the final five minutes, fatigue soon took a toll on the Blazers, plaguing the team with sloppy and unorganized passes and plays, but the team managed to continue to hold the Panthers scoreless for the rest of the game.

Hagan commended the team's efforts after the game and awarded freshman Lauren Rust and Alexander the "hustle awards." Acknowledging the unseasonably hot weather, Hagan praised the team, "everyone really put it all out of the field despite the heat. There was a good hustle and passes."

Craver also commended the team's persistence. "We worked together as a team this game, finally forming a unit together with our new coach. Our hard work this season is really starting to pay off," she said.

The Blazers' next home game is Friday, Oct. 19 against the Einstein Titans at 5 p.m.