Blair '13 graduate Sam Zbarsky will represent the United States in the 44th International Physics Olympiad (IPhO) in Copenhagen, Denmark from July 7-15. He and fellow Blair junior Michael Winston previously qualified for the U.S. Physics Team, from which Zbarsky was selected for the five-person traveling team. 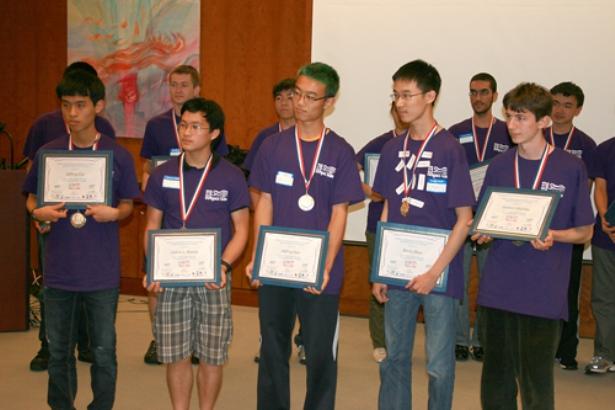 Photo: Sam Zbarsky (far right) and the four other members of the traveling U.S. Physics Team are competing in the 44th International Physics Olympiad.

Photo: Sam Zbarsky (far right) and the four other members of the traveling U.S. Physics Team are competing in the 44th International Physics Olympiad.

The two IPhO examinations last five hours each, and cover both theoretical problem solving and laboratory practice. Topics include mechanics of rigid bodies, quantum physics and relativity. The participants compete individually to earn a gold, silver or bronze medal or an honorable mention. The nine-day program will also include an opening and closing ceremony and excursions to major attractions such as the Experimentarium, a popular science museum.

This year's competition features more than 400 students from 90 countries, which appeals to Zbarsky. "I look forward to talking to interesting people. I'll get to learn, at the very least, about how these competitions run in other countries," he said.

Over the last decade, every member of the traveling U.S. Physics Team has brought home a medal at the IPhO, and Zbarsky aims to help continue the streak. "I expect to get at least some medal. It would be really bad for a U.S. team member not to," he said.

As two of the 20 selected students, Zbarsky and Winston completed a 10-day training session at the University of Maryland's College Park campus. This involved intense studying, labs, daily exams and problem solving to prime the students. "It was hard work and at times tiring," according to Zbarsky. Winston agreed, recounting how he felt challenged during the interactions with other students. "It was a pretty rigorous program. The lessons were nothing special, but talking with other people about problems and physics concepts was much more intense," Winston said.

After assessing the students, team coaches picked five of them to compete internationally, including Zbarsky. Since he just graduated high school, this year is his final chance to participate in the IPhO. Winston potentially has two more opportunities. "I am definitely planning to try again," Winston said. "Next year, I will probably focus more on meeting new people and forming lasting connections with them because I think I undervalued the social aspects this year."

Blair students have periodically earned a place on the U.S. IPhO team. Most recently, in 2011, Andrew Das Sarma won a silver medal in Bangkok, Thailand, and in 2010, Anand Oza won silver in Croatia.