Blair students make onigiri for a cause

On Nov. 8 and 9, Blair students made onigiri — Japanese rice balls — in the Student Activity Center as part of Onigiri Action, a campaign to donate to children in need. The event, led by Japanese teacher Yoko Zoll and sponsored by Japan-based non-profit Table for Two, commemorated World Food Day, which was on Oct. 16. 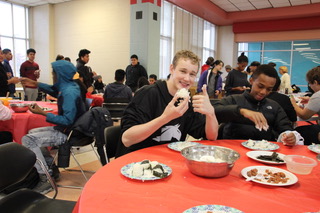 The Blazers were part of a worldwide community making, eating and posting pictures of onigiri with the hashtag #onigiriaction to provide for students facing food shortages around Africa. According to Zoll, each picture uploaded with the hashtag sent five school lunches to a child. This year, more than 200,000 pictures were posted from around the world, and 5,200 children were fed by Table for Two.

Zoll has been leading Onigiri Action at Blair for the past three years and enjoys the way it allows students to give back while building their knowledge of Japanese customs. "I'm very excited that we can help someone and, at the same, time, [experience] Japanese culture," she said. Onigiri is a staple food in Japan that is both healthy and easy to prepare, Zoll explained.

During the event, which took place during the first and second periods, Zoll stood at a large table covered with plates of rice, seaweed, pickled plums and other ingredients as she demonstrated the process. Students then socialized as they followed her example to make their own onigiri.

In past years, the event was only open to students taking a Japanese class, but this year, Zoll decided to invite other students in an effort to make the project even more impactful. "I thought I could help more children, so I emailed all the teachers to bring their classes," she said. Multiple ESOL, math, English and world languages teachers signed up to attend the event after seeing Zoll's email, so she had to make sure she provided enough supplies for more than 100 students. "Yesterday, I cooked 37 cups of rice. And today, 60 cups," she said.

Freshman Beverly Ngoune, who takes Japanese One at Blair, enjoyed the event. "We get to eat some pretty good onigiri, and we're also helping out others who are less fortunate," she said. Binh Le, also a freshman, found Onigiri Action to be an interesting new experience. "This is my first time and it's really exciting… there wasn't anything like this at my middle school," he said.

Blair students uploaded more pictures with the hashtag this year than ever before. Zoll said there were too many pictures to count, but remarked that she uploaded more than 20 and many of her students posted up to 50. She rewarded students who posted the most pictures in her Japanese class by giving them sushi-themed stationery.

Although Onigiri Action was a lot of work for Zoll, she was satisfied with the outcome and was glad it went smoothly. "Luckily I could handle it with the help of my [friend] who was there," she said. Many students echoed her sentiment and hope they can continue to participate in the event in the future.