On October 7, the Blair math team received results from the "Who Wants to be a Mathematician Competition" which indicated that it had more students qualify for the second round of the competition than any other high school math team.

First-year math team sponsor David Stein read about the competition and then worked with the team to convince 30 students to sign up for the online competition. Out of those 30 students, 14 participants qualified. "Blair had more students than any other school in the country," Stein said. 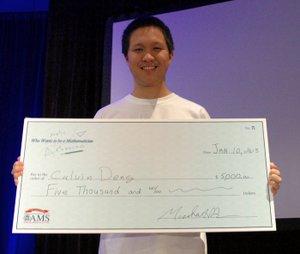 Photo: Last year, senior Calvin Deng of the North Carolina School of Science and Mathematics won the Who Wants to be a Mathematician competition at the Joint Mathematics Meeting in San Diego.

Photo: Last year, senior Calvin Deng of the North Carolina School of Science and Mathematics won the Who Wants to be a Mathematician competition at the Joint Mathematics Meeting in San Diego.

American Mathematics Society is in charge of the competition, which consists of four rounds. The first round of the competition took place in early September, and Blair was notified in early October about the team's scores. Those who answered eight out of ten timed questions correctly qualified for round two, which consists of a similar set of questions. Round two will take place from October 14-26. Ten students from different regions of the country will then move on to the semifinals in Baltimore in January, where only two semifinalists will advance. The final competition will be held in April, and the winner will receive $5,000 for both their own personal use and for their schools' math department.

The test involved relatively simple math questions but covered a wide variety of topics within a short amount of time. "Topics covered in the game and in the qualifying rounds include algebra, trigonometry, geometry, history of mathematics, probability—everything but Calculus," the official Who Wants to be a Mathematician website said.

The most difficult part of the test was the time limit, according to senior Alexander Bourzutschky, one of the math team's four captains and one of the competition's finalists. "It's very, very fast," he said.

In addition to its time limit, the test has one math trivia question about history or a famous mathematician. Bourzutschky believes that the trivia question is interesting and beneficial for students to learn. "The test was not too difficult, mathematically," he said. "But unlike other competitions, there's one non-math question about history or other trivia. It's not essential, but it's very important to know where something came from if you're working with it."

Bourzutschky plans to review for the second round of the competition by taking one of the site's practice tests and studying geometry, which he believes to be his weak spot. "I'll do a brief review of various geometry theorems, especially those with circles and triangles. It can be hard to remember which is which," he said.