B_SMaRT expands services to include 120 students this summer

The Blair Summer Math and Reading Team (B_SMaRT) summer program will take place at Blair from June 18 through Aug. 10. The program gives students the opportunity to earn up to 1.5 credits in predetermined Math, English or High School Assessment (HSA) Prep courses. 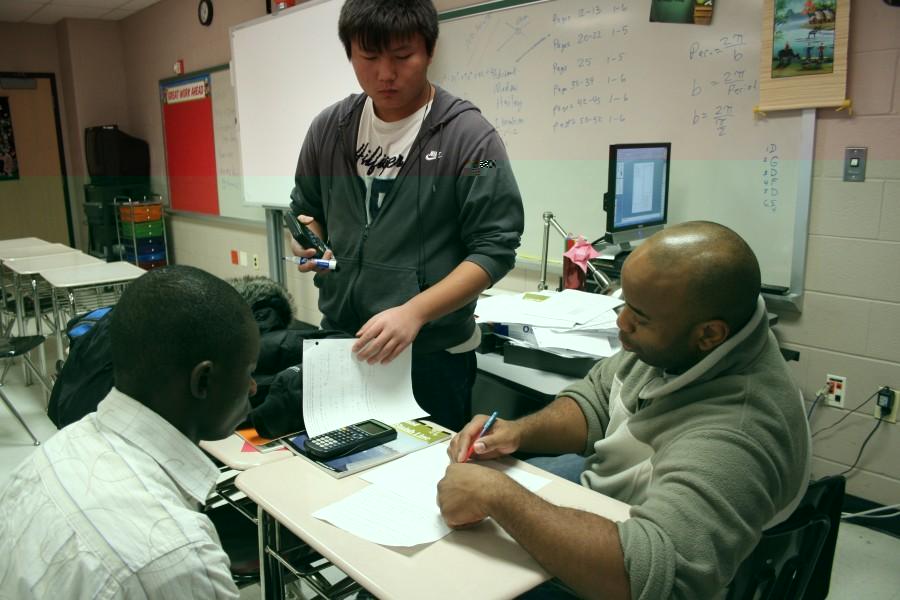 Photo: Scott tutors students in math. B_SMaRT will take place at Blair from June 18 through Aug. 10.

Photo: Scott tutors students in math. B_SMaRT will take place at Blair from June 18 through Aug. 10.

B_SMaRT was created as an alternative to typical summer school classes offered at Blair over the summer. The program was started by math teacher Jacob Scott, who was inspired to create the program after working extensively with Blair's English for Speakers of Other Languages (ESOL) population. B_SMaRT made its debut last summer, featuring only two courses and enrolling 50 students. The program's success included five summer Geometry students earning As in Honors Algebra II, after struggling in double period Algebra during the previous school year. After seeing this, Scott decided to expand the program for this summer to 120 students.

Eight classes, including Precalculus, Precalculus Prep, Algebra I and II, Geometry, Reading and High School Assessment (HSA) Prep as well as ESOL, will be offered. An exercise component will also be featured, with wrestling being offered as a specialty Physical Education (PE) credit. Though Scott is the program's coordinator, various teachers, National Honors Society (NHS) members and former B_SMaRT participants will also serve as tutors and assistants.

Scott was prompted to start the program after seeing one of his most promising Algebra students drop out of school because that student wasn't given credit for math he had mastered in his native country. For a foreign student to receive credit for a class they took in their native country, it must be approved by Montgomery County Public Schools (MCPS). If student's credits are not approved, they are often forced to spend a year in a course they have already learned, according to Scott. "They have to sit through the class though they already know the material," he said.

Scott believed that B_SMaRT distinguishes itself from typical summer school in its student population make-up. Typically, 80 percent of summer students are re-taking a class they previously failed, whereas only 20 percent of B_Smart students sign up for this reason, according to Scott. The other 80 percent are taking the class for the first time, choosing to get ahead in their studies over the summer. Scott believed that this desire to achieve and accelerate to the highest courses possible is important for all students. "My goal is to help the students to take as high a level of math as they can in high school," he said.

According to Scott, many students spend thousands of dollars taking remedial classes in college instead of advancing as far as they possibly can in high school. Scott wanted students to be able to further their education in high school, where the opportunity is still free. Scott's ultimate goal is to change the perception of summer school so that it is not thought of as a place where people go because they failed a class. "I want to make it a place where people go to get ahead," he said.