In their second official dual meet of the season, the Blair swim and dive team (2-0) triumphed over the Magruder Colonels 180-167. The boys' team brought the water to a scorching boil with a decisive score of 110-61, but the girls suffered a frustrating loss, falling 70-101 to the faster Colonel girls.

Both the boys' and girls' teams began the meet with first place wins in the 200 Medley Relays. The boys' team of senior Andrew McGehee, junior co-captain Jeffrey Lin, sophomore Eric Ruggieri and freshman Nik Hammond finished first with a time of 1:45.02, a full 10 seconds ahead of a second place Blair team and almost a half-minute ahead of the third place Colonels. McGehee gave the Blazers an instantaneous lead on the first leg and they never looked back. 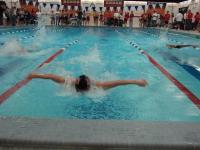 Photo: Junior co-captain Jeffrey Lin blazes his way to a huge first place win in the 100 Fly with a time of 55:88.

Photo: Junior co-captain Jeffrey Lin blazes his way to a huge first place win in the 100 Fly with a time of 55:88. Photo courtesy of Deepa Chellappa.

The girls' event, with the team of senior Melanie Snail, juniors Jenna Williams and Allison Arai and sophomore Laura McGehee, was much closer. The race remained neck-and-neck until Williams pulled out a lead that Laura carried through to win with a time of 2:01.63.

After the first two events, the meet took on an all-too-familiar pattern. The boys continued to claim first and second place finishes in many key events, but the girls often fell behind by mere tenths of a second. In the boys 200 IM, Blair swimmers junior Matthew Kannan and freshman Jared Wang landed huge first and second place wins. But in the girls' event, Arai fought a fierce, close battle for second place only to eventually fall to third with a time of 2:24.78, less than a second behind Shannon Powell of Magruder.

The boys' 50 Free saw difficulties for the normally dominant Blazers, as junior captain Nate Hukil's goggles fell off, costing him precious seconds. "We need to work on freestyle," coach David Swaney said after the meet. "We did some work during practice this week but we need to continue to work on it." Hukil agreed, noting that the event was probably the Blazers' worst of the afternoon.

Midway through the meet, the Blazer boys were in the lead while the girls were just barely trailing. The meet continued with the diving events, in which sophomores Sophia Seidell and Claire Hoffman claimed second and third place respectively, while senior Will Hernandez captured third, falling to the more experienced Colonel boys' divers. Swaney noted that the girls performed particularly well, racking up big points with their controlled and graceful dives. "Sophia had a great score against two really good divers," Swaney said. "Both of them did very well."

As the meet progressed, the boys' team scored impressive finishes in the 100 Fly, sweeping the event by earning first, second and third places. Lin was a powerhouse, finishing the race in a blistering 55.88, more than 10 second ahead of senior Kevin Rawlings, who earned second, and junior Sam Zucker, who won third. Unfortunately, the girls fell behind in the same event, though senior Melanie Snail captured third place with a time of 1:04.17.

The 100 Back saw big wins for the boys and the girls. Sophomore Winston Liu easily speeded by his competitors to earn first place with a time of 1:01.15, closely followed by junior Tommy Zhang, both rising stars on the Blair team. In the girls' event, Snail earned a close first place win with a time of 1:07.17 and sophomore Emily Shih gained third at 1:11.45.

The meet ended on an upbeat note with exciting victories in the 400 Free Relay, arguably the Blazers' best event. The boys' team of Lin, Kannan, Hammond and sophomore Dennis Li soundly pounded the Colonels to win first, with a time of 3:34.73. "Jeff led off the 400 Free Relay and after he swam, there was no doubt we would win," Hukil said after the meet.

The girls' team was also able to place in the event with Laura, freshmen Lenna Castro and Elsa Dupre and senior Melissa Mergner speedily swimming their way to second place and juniors Diana Jeang and Irina Somplatzki and sophomores Jenny Sholar and Emily Shih finishing third.

Overall, Swaney explained, the meet was reminiscent of Blair's performances two years ago, particularly because of the loss of many key swimmers on the boys' team. Even so, he said, the Blazers swam admirably against a tough team. "It was a good meet, but we didn't have too many fastest times," he said. "But it was a fun meet. Blair definitely has the most spirit."

The Blazers' next meet is Saturday, Dec. 20 against Blake at the Martin Luther King Swim Center at 11:30 a.m.