The Montgomery Blair Blazers (2-1) could not get their offense going against the Northwest Jaguars (2-1), who ran away with the game late in the second quarter in a 58-23 loss on Friday night.

The Blazers had a rocky first quarter. They were stopped by the Northwest defense three times and turned the ball over once, all resulting in a Northwest score. The Blazers' defensive line stopped Northwest's rushing attack, but the secondary defense was unable to stop the passing game. The Jaguars used screen passes and short passes to get their players into open space, and forced the Blair defense make tough open-field tackles.

"They do a lot of different things well, so we tried to pick something and stop an aspect of what they do, and hope for the best in other areas," said head coach Andrew Fields. 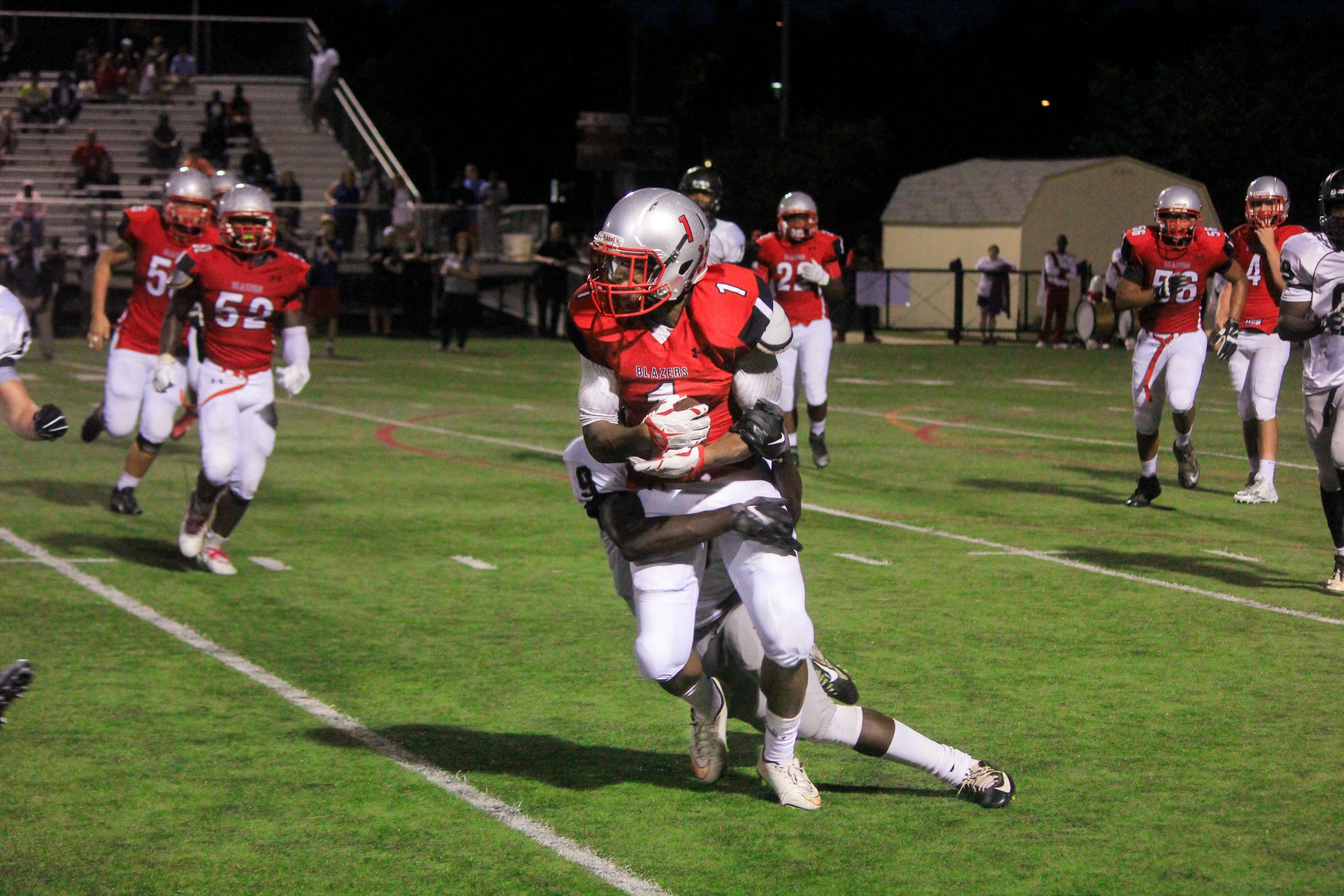 Despite a tough first quarter, the Blazers did not go down easily. The momentum quickly shifted in the Blazers' favor from the first play of the second quarter. Blair gave the stout Northwest defense a taste of its own medicine. Junior wide receiver Cliff Carter scored on a short pass. He got some good blocks from his teammates, shook off a couple of Northwest defenders and ran into the end zone for the Blazers' first score of the night.
<
Blair took the momentum, and on the ensuing kickoff kicker Brian Guzman kicked a short ball that the Northwest player could not corral. The Blazers swarmed to the loose ball and recovered it, giving the Blazers excellent field position. This was one of three successful recoveries in the game. "We practice running to the ball, pressuring, and I think the key was hustling to the ball every time," said Guzman.

Blair wasted no time sitting around, and junior quarterback Desmond Colby threw a deep ball, finding Carter again. Carter was brought down at the one yard line, and with a fresh set of downs junior running back Eric Zokouri punched it in for the short score. The Blazers kept the energy, and on the next drive Carter intercepted the Northwest quarterback, giving Blair's scorching offense another shot. Colby completed a pass to Zokouri and a deep bomb to senior Omari Brooks before a Northwest pass interference penalty put the Blazers back on the one yard line. Called on again, Zokouri scored again, and brought the Blazers to within seven points with eight minutes left in the quarter. 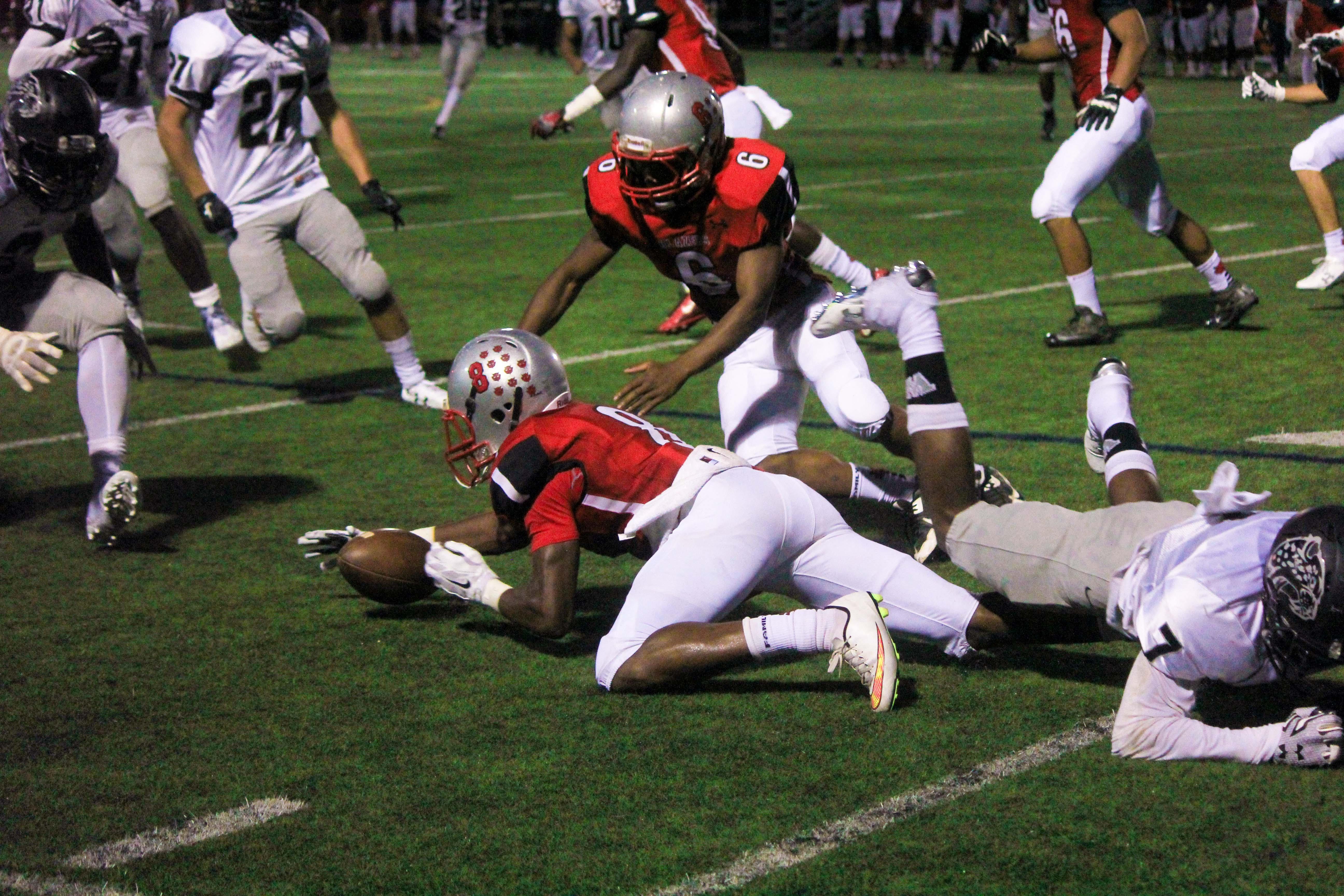 The Blazers forced seven turnovers in the game against a good offensive team. "We practiced turnovers all week in practice, and we just went hard for the ball," said senior defensive back Thien Cao.
Northwest drove down toward deep into Blair territory, but tough goal line defense by the Blazers forced the Jaguars to settle for a field goal. The end of the second quarter included another good drive by the Blazers offense, but Blair came away empty handed after the snap on the field goal attempt was mishandled. The Northwest offense quickly marched downfield, resulting in a short touchdown pass as time expired in the half, with Blair down 37-20.

To begin the second half, Blair swung some of the momentum back their way. They recovered the kickoff, then moved downfield for a field goal, and recovered yet another kickoff. "They weren't really onside kicks, we were just trying to place the ball where they weren't," said Fields. "We didn't want to give the ball to their deep guys, because they were pretty good players, so we kicked it to the shorter guys, and they weren't able to handle the ball."

The rest of the game belonged to Northwest, who scored three more touchdowns. Blair's offense was not able to move the ball as effectively as it had in the second quarter, and the defense who had held its own sputtered. In the end, the Blazers lost 58-23. "We tried everything, we all gave 100 percent, and we just tried to fly to the ball, make plays, and play as a team," said Guzman.

Northwest bounced back from a loss in its last game against Seneca Valley. Last year in the playoffs Northwest beat Blair 38-3.

Next week Blair plays at the Churchill Bulldogs (1-2), who were shut out 50-0 by Seneca Valley. Zokouri knows that every week is a chance to improve. "We need more turnovers, that's it, just work as a team, come to practice every single day and work hard," said Zokouri.