On Feb. 21, Blair's boys varsity basketball team (14-8) finished off their regular season with a nail-biting victory over the Walt Whitman Vikings (11-11). The Blazers returned home after a three-game losing streak with a new sense of energy and team work.

Right from the opening tip, it was obvious that the Blazers would have their work cut out for them. Blair’s starting five—junior guards Alfred Worrell Jr., Roman Cannuscio and Michael Ayala Jr., junior forward Tommy Waltz-Chesnaye and senior forward Abu-Bakarr Bangura—didn’t get a point off of the Vikings until almost halfway through the first quarter. With a tight defense and aggressive offense, Whitman dominated, but the Blazers stayed in the game with a few key threes by Cannuscio. The Blazers trailed 20-15 at the end of the first quarter.

The beginning of quarter two consisted of more of the same from both teams, but toward the end of the quarter, Blair began to pick up some momentum. The Blazers drew foul after foul while not missing a single free throw and slowly closing the gap. The half ended with Blair behind only 34-32. 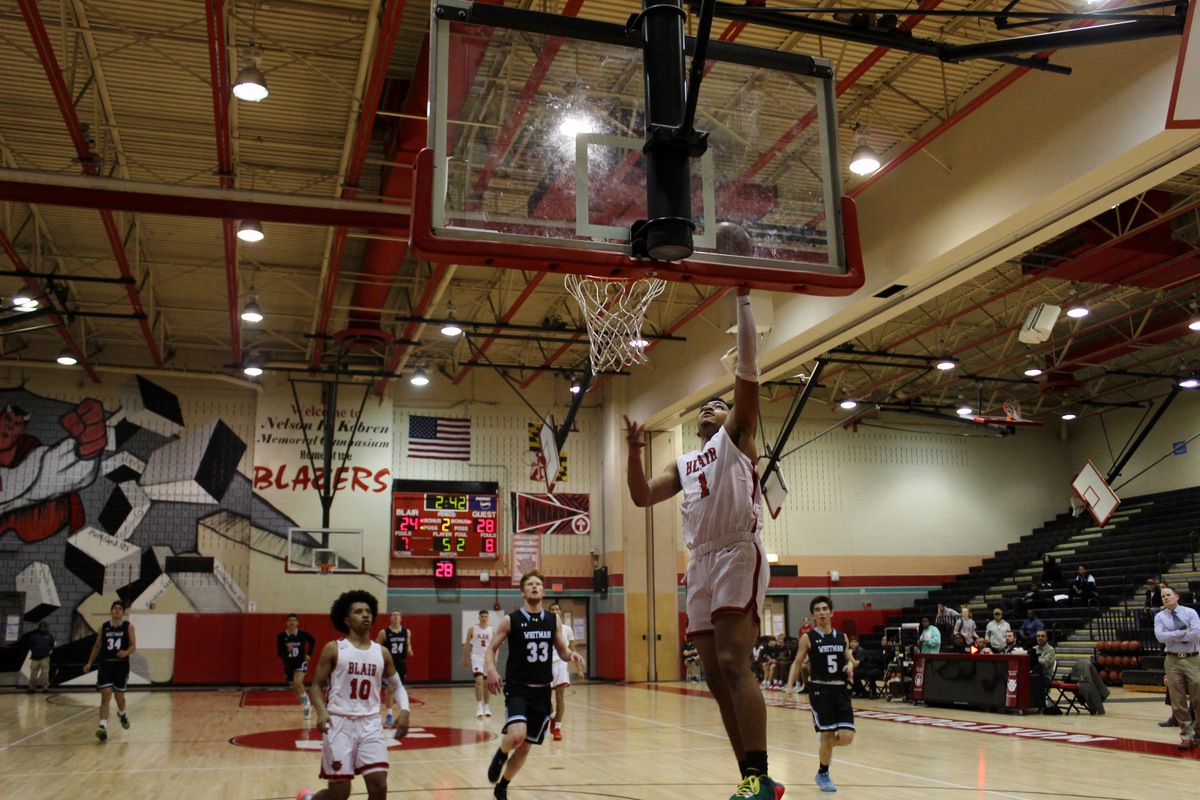 Photo: The Blazers bounced back from a rough streak to beat the Vikings in a nail-biting last regular-season game

Photo: The Blazers bounced back from a rough streak to beat the Vikings in a nail-biting last regular-season game

Blair’s momentum continued into the second half as they came to the court with a new sense of urgency. The Blazers opened up more offensive opportunities for themselves and pulled ahead of the Vikings. Midway through the third quarter, junior Alfred Worrell Jr. scored his one-thousandth career point, marking a memorable moment for both himself and Blair basketball. The gymnasium was full of energy as fans celebrated Worrell’s accomplishment and Blair began to take control of the game. The third quarter ended with the Blazers ahead 45-41.

Blair maintained a fast paced game and kept their lead throughout the fourth quarter. Whitman remained at the Blazers’ heels, but the Vikings could not match Blair’s energy. With nine seconds left in the game, the Vikings scored a three-pointer, narrowing Blair’s lead to two points, but losing 60-58 nonetheless.

“We played better together, moved the ball better and played better as a team,” Blair’s assistant coach Emanuel Charles said. After the game, Blair’s coaching emphasized the Blazer’s consistency and teamwork that lead them to the victory against Whitman. “A team like that is not going to shoot themselves in the foot that much. It’s really just about being consistent and not creating issues for ourselves,” said Blair’s head coach Damon Pigrom. Blair will hope to see more of the energy and teamwork shown at their final regular season game as they venture into the playoffs.