UMD-inspired gear is becoming a big hit among students

Blair teacher Vincent Inatomi designed and started selling new Blair shirts at lunch with a logo that draws inspiration from University of Maryland lacrosse jerseys with the state flag and the current Blair Blazer logo.

Inatomi, a paraeducator and lacrosse coach at Blair, designed the shirts for the lacrosse team as part of their workout gear. He was told by some students that he should make the shirts available to all Blazers. The design is a red shirt with a Maryland flag in a diagonal stripe across the front, the Blazer logo on the sleeves and the words Blair High School across the back of the shirt. "I wanted to make something that would make the lacrosse players, and now every student, proud to show they're a Montgomery Blair student," said Inatomi. 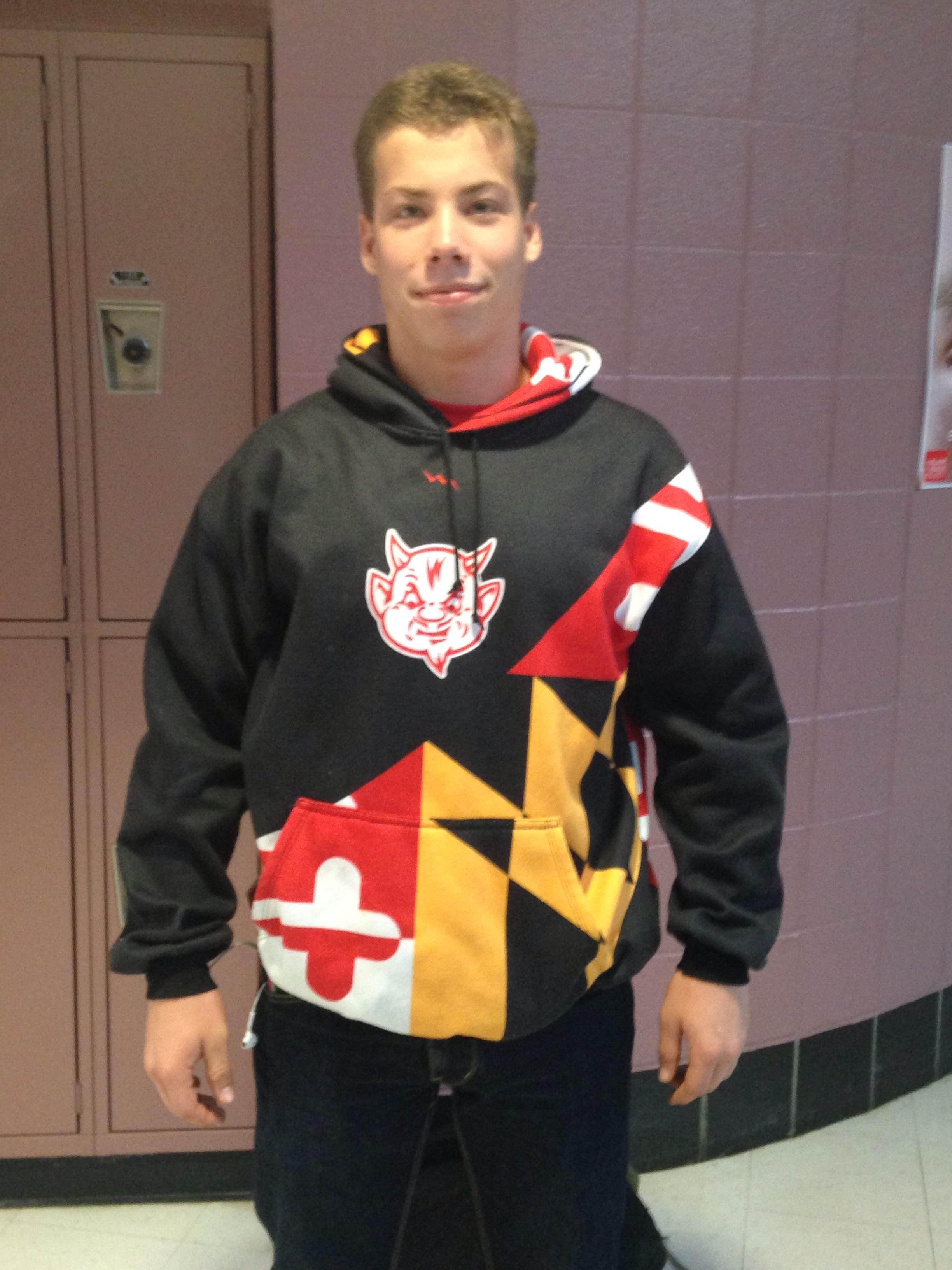 Lacrosse players thought the most attractive aspect of the new shirts was their similarity to Under Armour shirts used by many college and professional teams. "The logo makes it very similar to the University of Maryland gear. I love the Maryland flag and it's a nice new fashion statement," said sophomore lacrosse player Matt Morris, who was wearing his sweatshirt from the new line of Blair wear.

He made the design online through a company called Lightning Wear, which is based in Kensington, Md. He went to the warehouse and the owner gave him 30 free t-shirts as a sample to sell to students. "When I found out he was from Kensington, I wanted to check it out. I went there and we got along. He designs a lot of Einstein High School's gear, but he hadn't had a connection to Blair until I contacted him," said Inatomi.

The shirts quickly sold out after just a few days. Inatomi is looking to purchase more shirts from the company, as well as sweatshirts that he designed with a similar logo for the holiday season. The sweatshirts are black hoodies with the Maryland flag emblazoned across the pouch. "I'll probably buy a bunch before Christmas break, and if everybody likes it, we're going to sell them during our athletics games," he said.

All the proceeds are going to the Blair athletics program, but eventually he wants to support the entire school. If the products sell quickly, Inatomi is open to expanding to other sports. He praised Lightning Wear for their cooperation, and is happy to go back to the company in the future. He has been selling his products outside the SAC at 6th lunch, but many kids are also getting their hands on sweatshirts through friends on lacrosse. "I've had several people ask me how to buy them and I've bought several on behalf of others, so I think they should definitely be sold on a bigger scale," Morris said.