Although Blair was the only school representing Montgomery County, there were 15 total semifinalists from Maryland, with two coming from the Baltimore Polytechnic Institute and one from River Hill High School in Clarkesville. Seven students at Thomas Jefferson High School for Science and Technology in Alexandria, VA, were chosen as semifinalists. 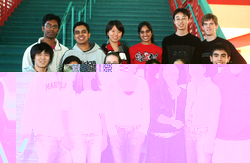 This year's 300 semifinalists were chosen from 1,558 entrants representing 486 high schools in 44 states, the District of Columbia, Puerto Rico, the U.S. Virgin Islands and an overseas school. In reviewing Intel STS entries, judges examined each entrant's research ability, creative thinking and scientific originality. Research covered "all disciplines of science including biochemistry, chemistry, physics, mathematics, engineering, behavioral science and medicine and health," according to the press release.

Each semifinalist will be awarded $1,000 as well as a matching amount going to their school.

On Jan. 25, forty finalists will be selected to attend the Intel Science Talent Institute from March 9-14, 2006, in Washington, D.C., where they will compete for $530,000 in scholarship money. The top ten finalists will be honored at a black-tie banquet and awards ceremony on March 15, with the first overall finalist receiving a $100,000 scholarship.

Correction: This article originally stated incorrectly that Blair had the most Intel semifinalists in the nation.