Despite earlier reports, Blair will retain the same number of computers 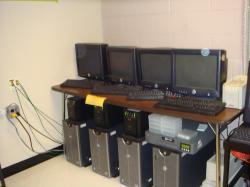 Photo: Powerful computers, which will be replaced or upgraded under TechMod this summer, help run the Blair IT system.

Photo: Powerful computers, which will be replaced or upgraded under TechMod this summer, help run the Blair IT system.

Despite its earlier suggestions that Blair might lose computers because of decreased enrollment, the MCPS Department of Field Operations (DOFO) announced in a January meeting with MCPS principals that Blair will retain the same number of computers after a change in policy. Under the revised rule, old computers can be refurbished by having their memory and other aspects updated rather than be taken away. Blair IT staff learned about this decision on Feb. 26. 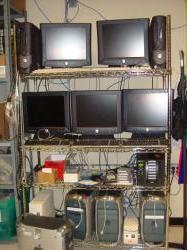 Photo: The Blair server is housed in the back of the Media Center.

Photo: The Blair server is housed in the back of the Media Center.

The DOFO had suggested to Blair last year that the school might lose computers because of the decrease in enrollment since Blair underwent TechMod review four years ago. Blair's projected enrollment for the 2008-2009 school year is 2,625 students – down from the 3,225 students enrolled when Blair was evaluated by DOFO in the 2004-2005 school year, according to the MCPS Schools at a Glance document found on the MCPS web site.

But because MCPS is building new schools and shifting students, individual school enrollment is decreasing in many schools across the county, according to Cady. When many schools complained to the DOFO after learning that they might lose computers because of decreased enrollment, the DOFO decided to change its policy and refurbish old computers instead of taking them away, according to Cady. "The idea is not to hurt the schools - it's to help them," he said. "We became sensitive to the fact that we couldn't take away computers."

In the review four years ago, Blair did not receive enough computers and former Principal Philip Gainous used revenue from school vending machines to purchase computers to make up the difference. Hall believes the experience four years ago was a factor in the DOFO's decision to not reduce the number of computers at Blair. "I think that MCPS has learned from our difficulties," Hall said.

Blair IT staff alerted department chairs to the possibility of losing computers earlier this school year. Staff members including English resource teacher Vickie Adamson had expressed disappointment over the original announcement. "I was discouraged since we were going to lose resources," she said. "We were preparing ourselves for the worst." 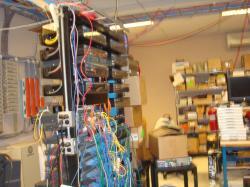 In past years, the DOFO asked the County Council for more money from the CIP budget to increase the ratio to one computer per three students for all MCPS schools, but the County Council did not approve the funding, according to Cady. "We were about 2000 computers short," he said, referring to a shortage throughout MCPS schools.

Computers will be replaced based upon their age and function. According to Hall, technology education classes and other classes that use advanced software programs will receive the newer, faster and more powerful computers, while other old computers will be updated and refurbished.