BLAZER FIELD, OCT. 3-
The Blazer's home field advantage paid off once more as Blair's varsity field hockey team defeated Wheaton in their third home game, bringing their record to 3-3-1. Playing with consistency, the Blazers attacked Wheaton's goalie circle throughout the game which earned then the 5-0 win.

The Blazers began the game sloppily, fumbling for possession which gave Wheaton the opportunity to penetrate Blazer territory through fouls and penalties. Wheaton charged up the left sideline into the Blair circle, but the Blair defense ripped away any possibility for a shot. 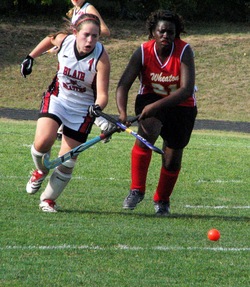 Photo: Junior Julia Stratton fights for the ball against a Wheaton player.

Photo: Junior Julia Stratton fights for the ball against a Wheaton player.

Sparks flew immediately once the defense cleared the ball to senior co-captain Eve Kenney. A long pass from midfield set up senior Iliya Smithka to put Blair on the board within the first three minutes. Smithka speedily dodged the opposing defenders, and although her first shot was deflected by the goalie's pads, she recovered the rebound and pounded the ball into the left corner of the cage.

Several minutes later, Kenney completed a similar pass, this time to junior Julia Stratton. Knotted in a one-on-one battle with the goalie, Stratton was unable to score before the Wheaton defense cleared the ball.

Blair continued to assault and add pressure on the goalie cage. The Blazers received several corners halfway into the first half, but a few errors in timing and control cost the team points.

Finally, with seven minutes remaining in the half, a series of rapid passes gave Smithka another shot at goal. With time on her side, she carefully set up and swung. The goalie deflected the shot, but Smithka regained control of the rebound without hesitation and aimed the ball diagonally into the left corner of the goal, adding another point for the Blazers.

This set up the Blazers for more action around the Wheaton goal. With the last minutes of the half dwindling down, a perfect through from senior Cate McCraw gave Stratton the ball she was looking for. Standing right next to the cage, she quietly tapped the ball in, giving Blair a 3-0 lead to end the half. 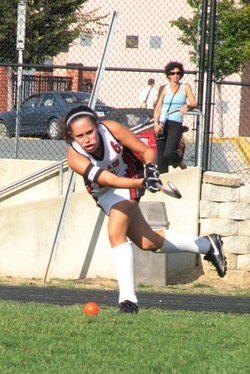 Blair entered the second half with similar intensity. Kenney took many long range shots to keep the pressure on the Knights and Smithka executed multiple passes from the sidelines to increase the strain on the center of the circle.

The Knights cracked under this pressure when, traveling along the left side of the field, senior Naima Merella crossed the ball to Kenny who quickly passed to Smithka. Eagerly waiting another shot on goal, Smithka found the left corner of the goalie cage again for her third score.

With seven minutes left, Blair locked the game when Stratton delivered one final goal off of an assist by Kenney.

Co-Captain Sumih Chi believed their determination in scoring led to their victory. "We were ball-hungry," she said. "And therefore we scored goals."

Coach Brook Franceschini also believed that the game went well, but that there was still room for improvement. "We communicated towards the middle of the game, and we scored today," she said, "but we still need to learn how to used the sidelines, and spread out more effectively."

The varsity field hockey team plays its next home game on Monday, Oct. 8 against Paint Branch at 3:30 p.m.