Blair track runs away with a victory

MARCH 27, BLAZER TRACK -
The Blair boys' track team remains undefeated after Tuesday's tri-meet against Blake and Rockville, bringing their season record to 4-0. The girls' team also defeated both schools, with a score of 95-42 against Blake and 112-15 against Rockville. 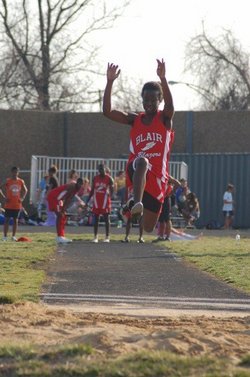 Photo: Junior Lamin Sherman leaps into the sand pit at the end of the long jump in Tuesday's meet.

Photo: Junior Lamin Sherman leaps into the sand pit at the end of the long jump in Tuesday's meet.

Blair runners had a strong showing in the meet, winning all but two of the track events.

Distance runners impressed in the mile, with the boys sweeping the event by capturing the top three places. Junior Nilan Schnure, sophomore Rutvij Pandya and senior Emanuel Waktola remained in a close pack through most of the race, with Schnure and Pandya surging ahead at the end to capture first and second in 4:50, while Waktola finished in third, just five seconds behind.

Halsey and Ashlyn Sinclair won first and second in the girls' mile, and both finished more than 50 meters ahead of the next runner. The boys' team sprinters swept the 400m and 200m runs, with wins by Louis Varella (won 400 in 51.23 seconds) and Mohamed Mansaray (won 200 in 22.7 seconds).

The Blazers also excelled in the relays, capturing the sole five points awarded for the winning team in a relay event in nine out of the ten relays.

On the field, the boys swept the shotput, with senior Sam Francois and juniors Alex Wang and Kent Aje taking the top three places.

In the long jump, juniors Rex Jarrett and Mansaray placed first and second for the boys, while senior Amani Foster and sophomore Megan Ferguson placed second and third for the girls.

"That's an impressive accomplishment," said head coach Mike Fleming of the Blair teams' wins. He noted that though Rockville did not bring a strong team, Blair was able to do well against the competition offered by Blake. "There's a lot of potential on this team, a lot of athletes who can run well and do very well [in this sport]."