Blair’s Varsity Girls’ Basketball team (14-8) beat the Springbrook Blue Devils (4-19) by a score of 53-41 on Feb. 28. The Blazers had a strong offensive showing, which played a major role in their victory.

Blair started the night strong with four baskets by junior guard Kate Hildebrandt and multiple free throws in the first quarter. However, they began to lose their control in the second quarter, allowing the Blue Devils to quickly retaliate. Bad passes and hasty shots by the Blazers gave possessions to Springbrook and allowed them to score. Additionally, there were many instances where the Blazers took shots from one extreme side of the basket, but didn’t have anyone to rebound on the other side when the shots went long. This gave Springbrook rebounds and additional scoring opportunities. These little mistakes kept the game close, with Blair trailing 21-20 at halftime. 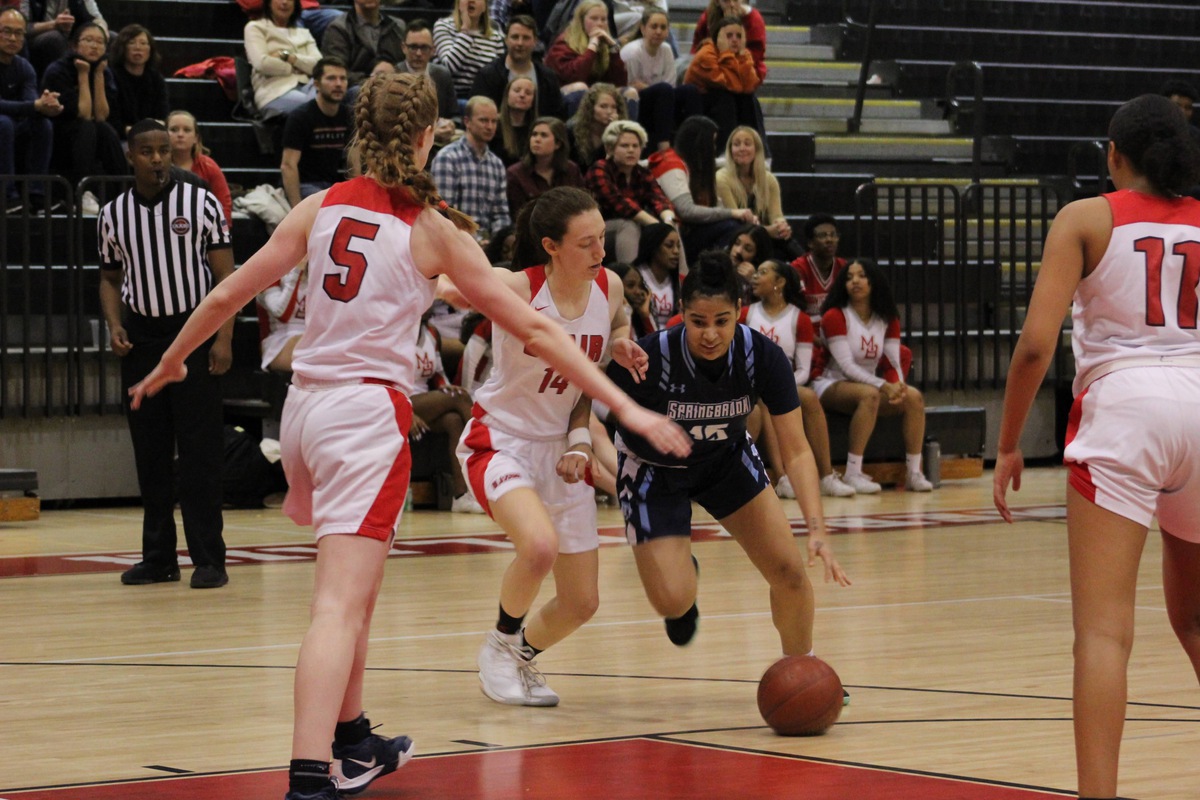 Photo: The Blazers prevent Springbrook from shooting with their fiery defense (courtesy of Nathalie Molina).

Photo: The Blazers prevent Springbrook from shooting with their fiery defense (courtesy of Nathalie Molina).

The third quarter was tense for both sides as each struggled to pull ahead. The score was tied four times throughout the quarter, until Blair finally pulled ahead to 31-30. Once Blair gained that lead, they didn’t look back. Strong passes, aggressive rebounds and extra energy kept the Blazers on top. “We weren’t scared of anything. We drove with confidence and we just finished,” Hildebrandt said. A collective 22 points in the fourth quarter secured Blair’s 53-41 victory.

Compared to previous games, the Blazers' defense and offense were both on point this time around. Hildebrant’s 17 points, senior captain and guard Zoe Abramson’s 13 points, and freshman guard Natalie Frost’s 12 points helped propel Blair on the scoreboard. On the defense front, senior guard-forward Lucy Martin, sophomore guard-forward Sayara Thomas and freshman guard Amelia Martin got a collective total of 14 defensive rebounds. Abramson described the defense strategy and how it improved throughout the night. “I think at the beginning we struggled, but switching up into a zone helped us bring up our energy level. Going back to a man-to-man defense, we really worked on trapping the drives and making sure that they couldn’t get open shots,” she said.

Abramson also explained how the team kept spirits high, despite the lead changing hands multiple times. “It was just knowing we weren’t going to accept losing. We did not want to lose to Springbrook. We knew we had to get a couple more points than them, so we just focused on that,” she concluded.