Blair's Varsity Girls' Basketball team (2-0) beat the Wootton Patriots (1-1) by a score of 61-51 on Tuesday night, powering through their first home game of the season. Both teams had tactful performances, but the Blazers secured the victory with their superior passes, shots and defense.

The game began with junior captain and guard-forward Peyton Martin winning the tip-off. The Blazers lost possession of the ball and Wootton made a quick shot, opening the scoring at 2-0. However, the team remained unfazed, with junior guard Kate Hildebrandt evening the score to 2-2. Senior captain Lucy Martin followed in suit and quickly turned the score in Blair's favor. The Blazers continued to score points with remarkable teamwork and strong passes across the floor. Defense was strong with players constantly forcing Wootton out of bounds; Peyton Martin and senior guard Zoe Abramson successfully blocked several of Wootton’s shots. The quarter ended with a 3-point buzzer-beater by Peyton Martin, leaving Blair up 22-11. 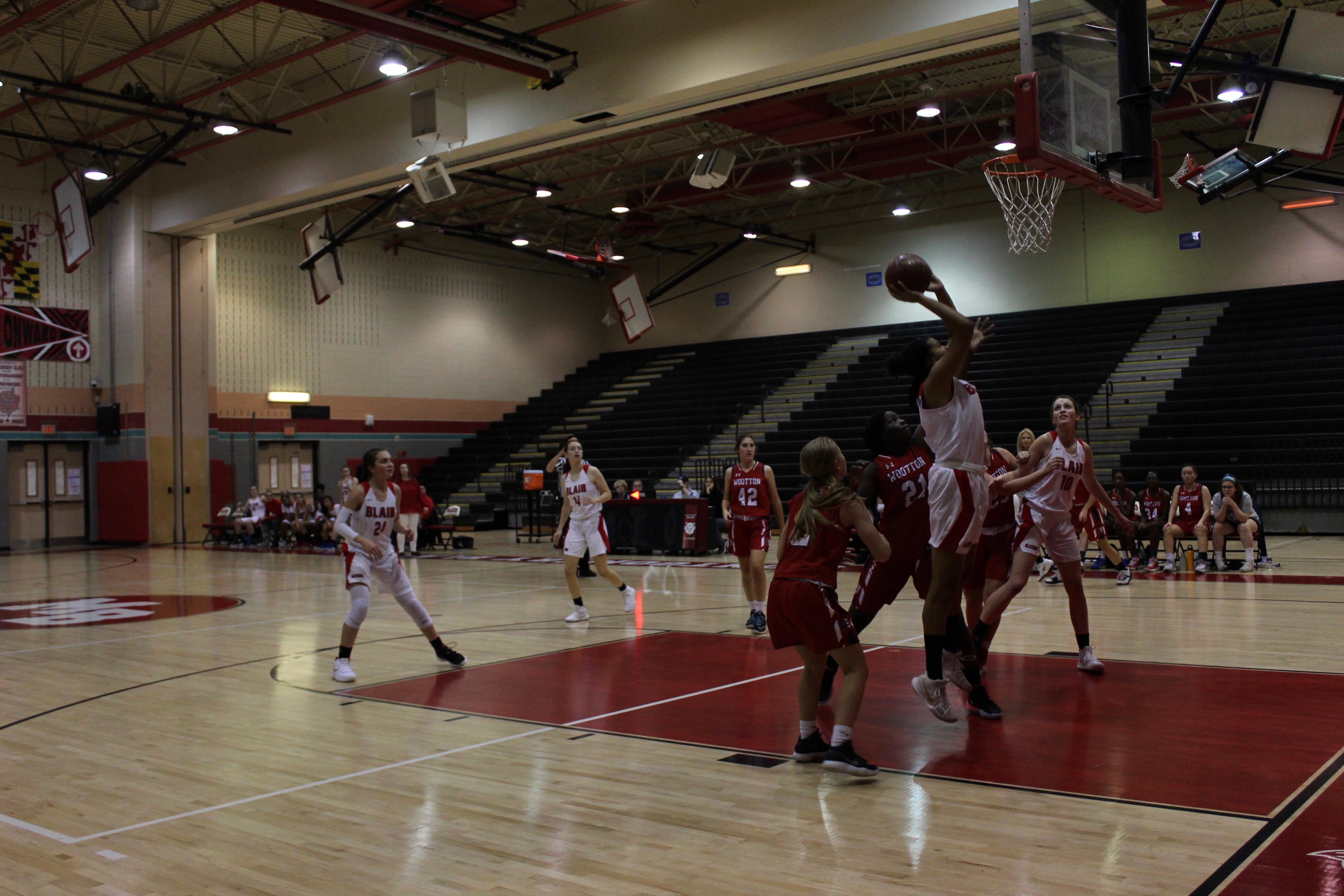 The game became more intense in the second quarter, with the Patriots meeting the Blazers' initial attack with quick passes and strong defense. Throughout the quarter, sophomore guard Emily Liu dominated the court by closely guarding her opponents and making three baskets for Blair, including two 3-pointers. However, Blazers made multiple fouls, leading the Patriots to score points with free throws. The Patriots also scored a total of 13 points in the last minute of the quarter, tightening the score to 32-28 going into the half.

Freshman guard Amelia Martin detailed how Blair spirits were low during halftime. “We went through a big pep talk during halftime to bring our energy back up to the same level as theirs because basketball is all about our third quarter game and how we’re going to come back and seal the deal,” Amelia Martin said.

The air was tense as the third quarter began, as Blair was determined to maintain their lead and Wootton strived to flip the score. Invigorated from pep-talks during the halftime break, both teams had a visible increase in spirit. Dramatic turnovers and fast breaks from both sides characterized the quarter, causing the ball to rapidly change hands and intensifying the competition. Freshman guard Natalie Frost and Abramson played strong throughout the quarter, scoring four points each. The Blazers worked to widen the gap on the scoreboard and succeeded, as the quarter ended 48-39.

The fourth quarter was heated. Wootton's center player continued to score, but the Blazers were able to counter her scores by continuing to make baskets for Blair. Both sides shot aggressively; Blair collectively scored 13 points, while Wootton scored 12. By establishing a comfortable lead in the third quarter, the Blazers prevented the Patriots from making a comeback. The Blazers successfully held on to the ball during the last minute of the match, ultimately securing their 61-51 victory.

After the game, Peyton Martin reflected on what the team should continue to work on as the season progresses. “Right now, making sure we’re always serious on defense. I think that sometimes, when we get ahead, we let off a bit,” she said, referring to the Patriots' comeback in the second quarter.

Coach Amy Ferguson was proud of the communication and determination the team exhibited throughout the game. “These girls never gave up and they were willing to move the ball and pass it to one another so, overall, a good win,” Ferguson said.

The Blazers will play their next home game on Friday, December 13th against the Magruder Colonels at 7:15 p.m.