The Warriors beat the Blazers by a score of 45-34

Blair’s Varsity Girls’ Basketball team (10-3) lost to the Sherwood Warriors (11-2) by a score of 45-34 on Tuesday night. This marks their second loss of the season against Sherwood, despite having the home court advantage for this game.

The Blazers struggled to score early in the game, as Sherwood jumped out to a 7-0 lead in the first 15 seconds. The Warriors' strong offensive rebounding allowed them to accumulate an overwhelming amount of second chance points. By the end of the first quarter, Blair had only scored six points, four of which were from junior guard Kate Hildebrandt. This led to Blair trailing 11-6.

Second quarter showed improvements by Blair. Shots by freshman guard Natalie Frost as well as Hildebrandt boosted Blair to tie the score at 17-17 with 2:20 left before halftime.A free throw and two-pointer by Sherwood in the last 22 seconds of the quarter left Blair behind at 20-17.

The third quarter was a turning point for Blair. Baskets by junior captain and guard-forward Peyton Martin and senior guard-forward Lucy Martin pulled the Blazers ahead to 21-20, their first lead of the game. Lucy Martin followed with a three-pointer, which motivated the Blazers. “We needed some energy on the court because there was some frustration; getting that energy made it so that we played better as a team and made us a cohesive whole,” Lucy Martin said. 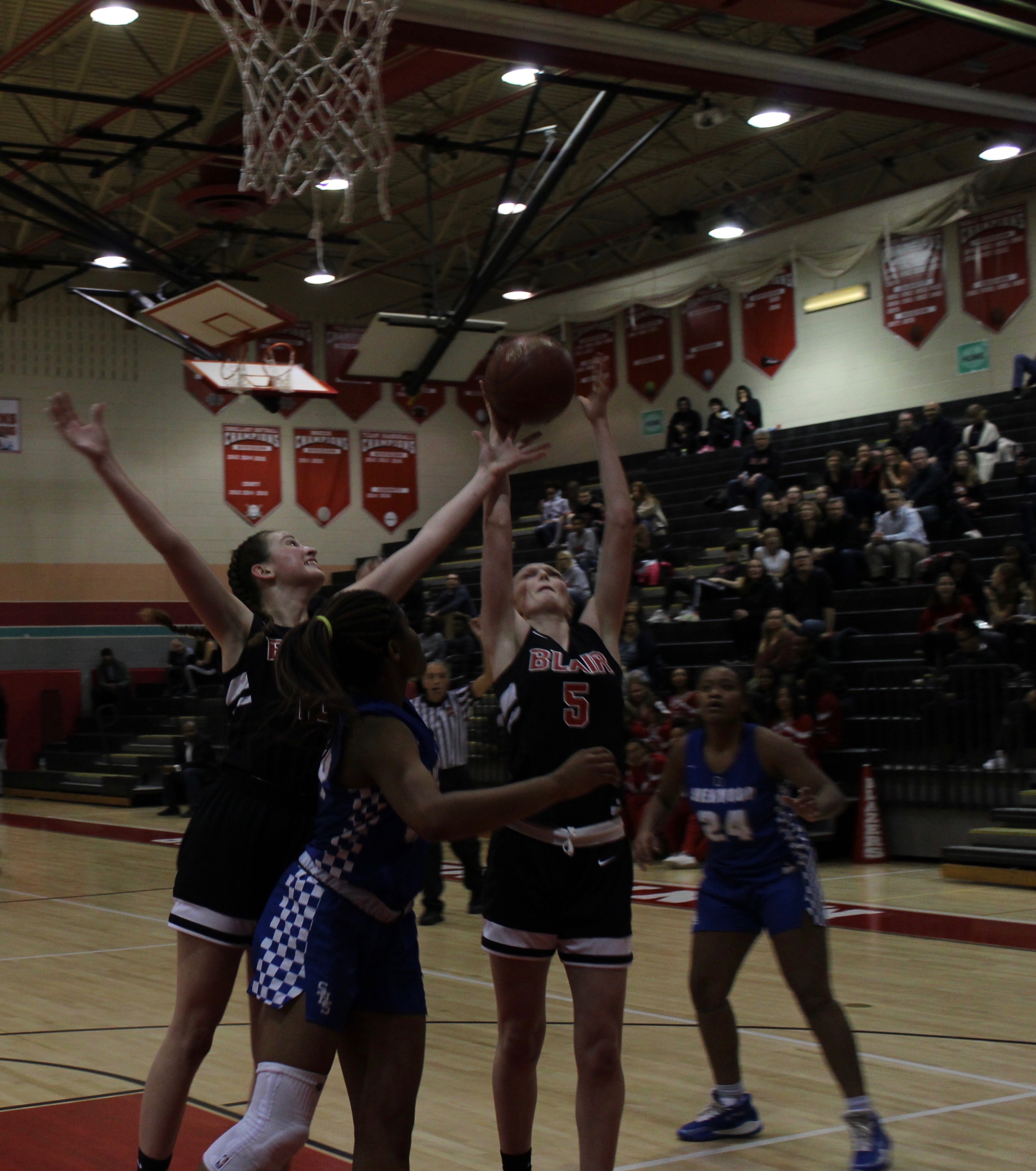 The lead continued to trade hands throughout the quarter, but hasty passes and hesitant shots allowed Sherwood to outscore the Blazers. Sherwood dominated the fourth quarter with 14 points and limited Blair to six, leading to Blair’s ultimate 45-34 defeat.

In spite of the loss, the team showed a visible improvement from their 71-58 loss to the Warriors on Jan. 7. “We actually came back in this one and got ahead. That really did not happen in the previous Sherwood game”, Coach Amy Ferguson said. "But even though we really came out third quarter, Sherwood came back ready in that fourth quarter, which totally changed the momentum. It was mostly just a difference in rebounding performances.”

Lucy Martin also reflected on the team’s performance. “We also didn’t execute well on offense; 34 points isn’t really a good score for us because we should be scoring more than that. We played good defense and we held them to a pretty low score for them. The defense and the hustle was definitely there tonight,” she said.

The Blazers will play their next home game on Wednesday, February 5th against the Walter Johnson Wildcats at 7:15 p.m.