The Blazers beat the Barons by a score of 54-43

Blair’s Varsity Girls’ Basketball team (7-1) beat the Bethesda-Chevy Chase Barons (5-1) 54-43 on Friday night. The Blazers came back strong after their loss to Sherwood on Wednesday night, beating a team that they have lost to in previous years.

The game opened with Blair winning the tipoff and junior guard Kate Hildebrant making a three-pointer. However, B-CC quickly retaliated with six points of their own. Their players quickly set up plays that left Blair lagging behind. Blair put on a strong show defensively, but they struggled to find scoring opportunities. Freshman guard Natalie Frost and senior guard-forward Lucy Martin made numerous rebounds and intercepted B-CC’s passes, but most plays were left incomplete due to hasty passes and failed shots. With 11 turnovers, 10 deflections and little offensive success, Blair could not catch up. In the last five minutes of the second quarter, Blair was unable to make even a single basket. By halftime, the Blazers were trailing 23-20. 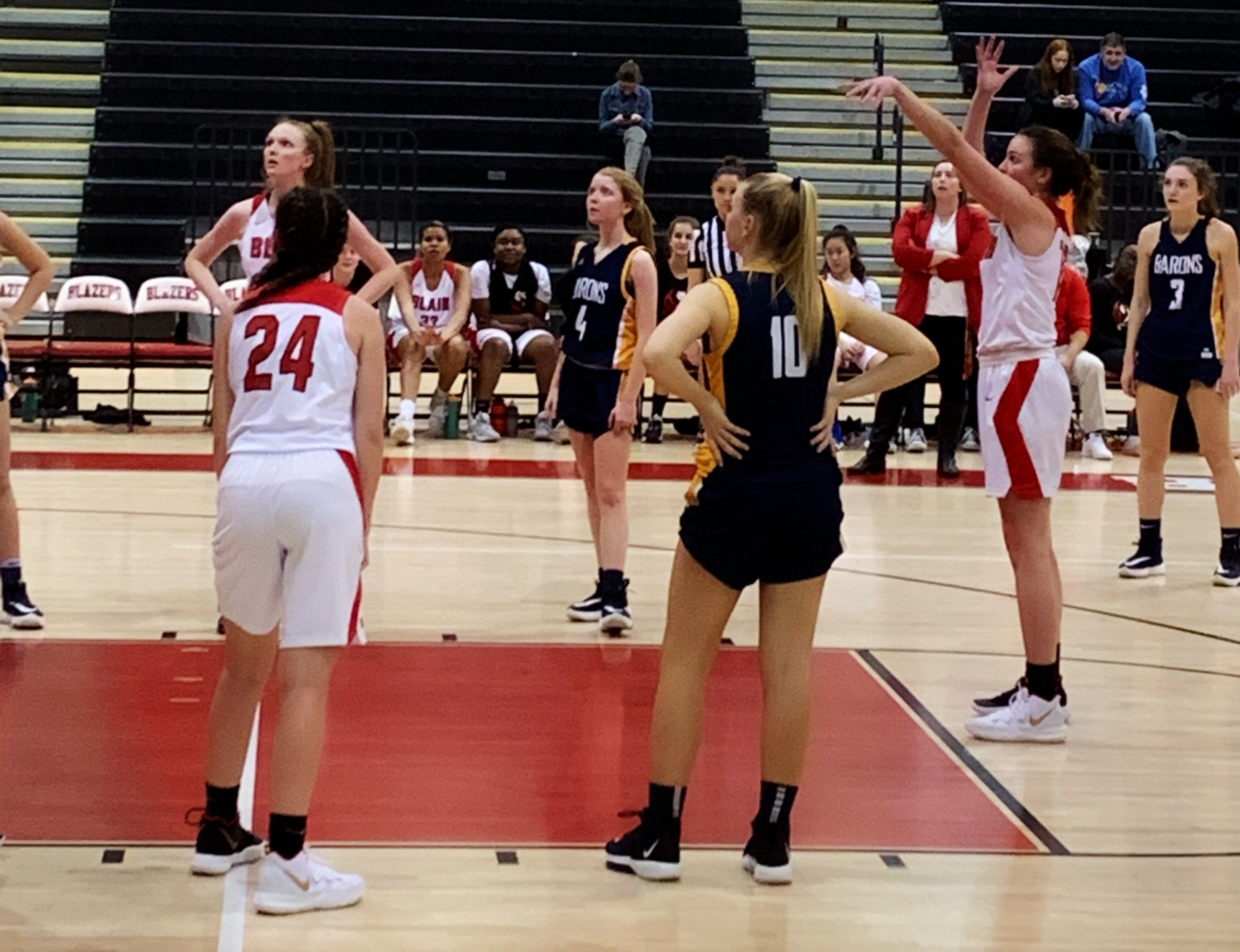 Halftime was a critical period for Blair as Coach Amy Ferguson strove to change the team’s mindset and outlook. “We just had to play Blair basketball. We were playing really selfish in the first half and we knew that we could beat every girl one-on-one. I just told them that that’s not how we were going to beat them. We needed to move the ball to get the flow going,” Ferguson said.

Junior captain and guard-forward Peyton Martin also reflected on her weak performance in the first half of the game. “I was kind of sick today, so I wasn’t expecting myself to do well. I didn’t set standards for myself and I had a really poor first half. When we went to the locker room, I was told to set higher expectations for myself and believe in myself as a player who is capable. In the second half, I just wanted to demand the ball and score,” Peyton Martin said.

The score deficit increased in the beginning of third quarter, but the Blazers persisted with drastically improved passes and communication. Freshman guard Amelia Martin’s steal near the end of the quarter marked the start of Blair’s comeback. “I think it energized my team a lot because when I got that steal it made the rest of my team think that if they press girls then they can get steals and then they can get points. If you make that scoring opportunity for yourself by stealing the ball, it rewards you in a whole different way, ” Amelia Martin said.

The Blazers increased their aggression as they pushed to close the 33-31 deficit in the fourth quarter. Peyton Martin’s free throw and subsequent two-pointer helped Blair finally pull ahead of B-CC with 6:45 left in the game. After that, the Blazers pushed to maintain the lead. As B-CC grew frustrated, they made more and more mistakes that kept the ball in Blair’s control for the majority of the quarter. By fouling, double-dribbling and travelling, the Barons allowed the Blazers to add 23 points to their score over the quarter. Blair’s powerful defense limited B-CC’s points to 10. This led to Blair’s ultimate 54-43 victory at the end of the night.

Peyton Martin concluded that a major part of the team’s victory was their determination to win on home court. “Friday night is basketball night and we don’t lost on basketball night,” she said.

The Blazers will play their next home game on Friday, January 17th against the Paint Branch Panthers at 7:15 p.m.