The game started with junior captain and guard-forward Peyton Martin winning the tip-off. Blair quickly achieved a four-point lead with a freethrow from freshman guard Amelia Martin and a three-pointer from junior guard Kate Hildebrandt. Northwood countered with a two-pointer. The ball continued to exchange hands throughout the quarter as shots were made by both teams. Stress levels were high as Northwood began to close Blair’s lead. The Blazers appeared visibly distressed as they missed some shots and made a few rough plays. Blazer defense continuously grabbed rebounds, but Northwood's persistent offense caused the Blazers to foul. Blair ended the first quarter with a narrow lead of 16-10.

Amelia Martin reflected on the team's subpar defense, which allowed the Gladiators to counter the Blazers' baskets. “We need to rotate the ball on offense, communicate on defense and help on defense; we lost so many points because they kept dishing the ball to the same [Northwood player] on the opposite block.”

During the second quarter, the Blazers had newfound energy and determination as they widened the score gap. Northwood continued to make baskets, but Blair stifled their opponents' success by tightening up passes and making cleaner shots. Increased communication led to better quality plays and ended the first half 36-18.

With the help of her teammates, freshman guard Natalie Frost opened the third quarter by swiftly scoring five points. Through successful communication, the Blazers continued to catch rebounds and direct the ball to their side of the court. Fourth quarter highlighted some of the issues with both Northwood’s offense and defense. On defense, Northwood tried to set several picks, but they were ineffective as Blair dribblers passed to a teammate they kept nearby. On offense, Northwood made several shots from either side of the basket, but had no one rebounding on the other side when the shot was too long. The night ended with a 70-35 victory for Blair. 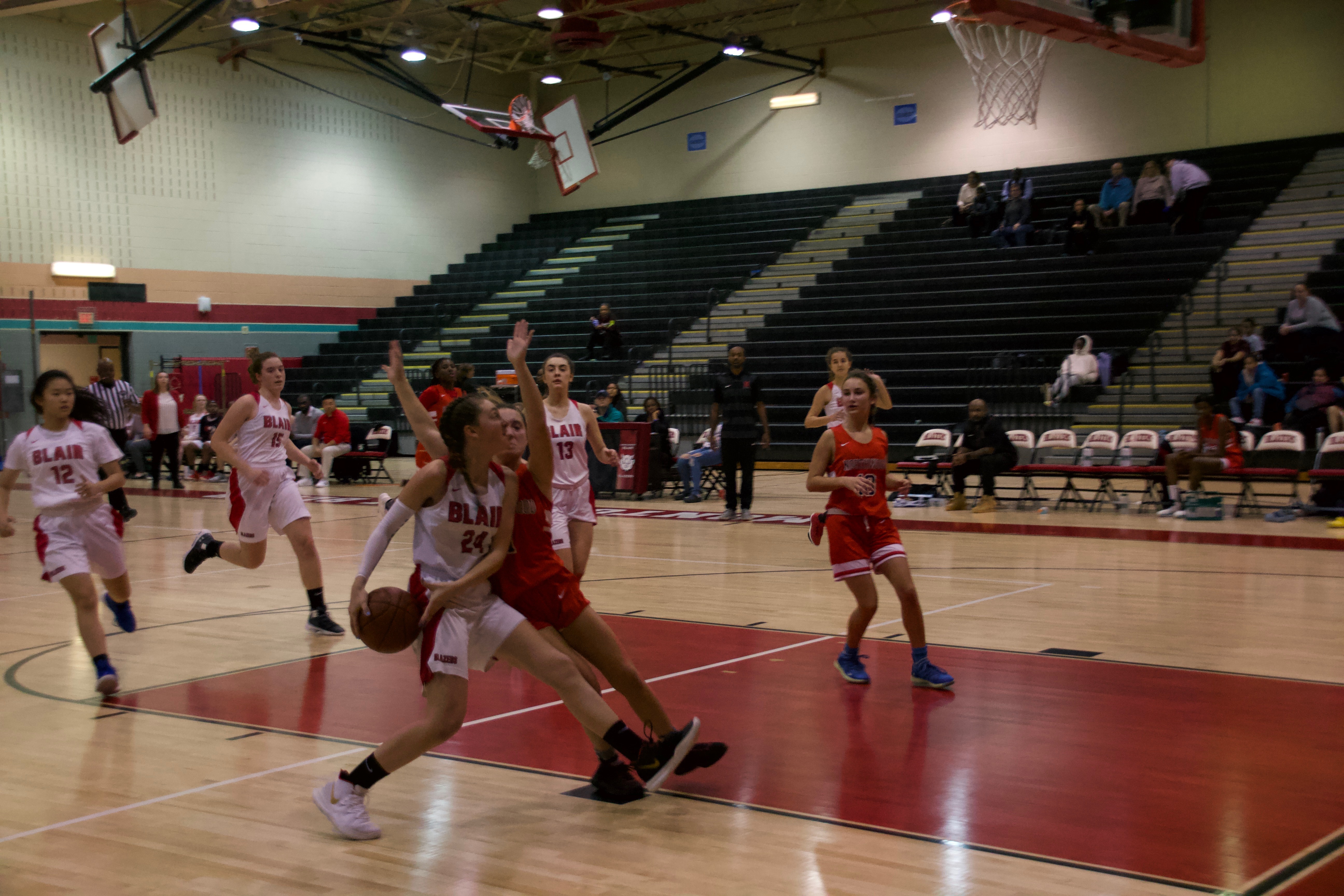 Photo: Freshman guard Amelia Martin pushes past Northwood defenders to get in a position to shoot.

Photo: Freshman guard Amelia Martin pushes past Northwood defenders to get in a position to shoot.

Frost agreed that Blair's victory was a direct result of the change in Blazer morale during the second quarter. “I think we struggled a little bit in the first quarter, but then from the second quarter to the fourth quarter we picked it up...First quarter we were rushing things, like we were kind of nervous. Then, second quarter, we were able to slow it down and actually run through our plays and get the ball to the open person to score,” Frost said.

The Blazers will play their next home game on Friday, January 10th against the Bethesda-Chevy Chase Barons at 7:15 p.m.