The Blair girls’ varsity volleyball team (10-3) defeated the Walter Johnson (WJ) Wildcats (9-5) by a score of 3-2 on Wednesday in their first five-set game of the season. The Blazers lost the first two sets 18-25 and 17-25, but came back to dominate the last three sets. Despite the absence of two key senior players due to injuries, Blair ultimately clinched the win. 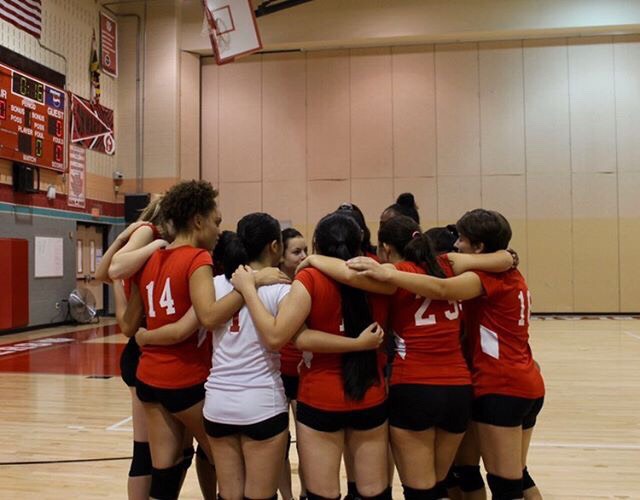 In the first two sets, there was an obvious lack of energy and coordination from the Blazers. Missed serves and failed blocks ended with points lost at the net. Coach Chris Liang tried to prevent the Wildcat’s momentum by calling three time-outs. However, WJ was too far ahead and won the first two sets easily.

At the beginning of the third set, Blair took an early 4-2 lead. The Blazers seemed to have regained control and were determined not to let go of the game. Shanked passes by WJ widened Blair’s lead to 12-4. However, WJ fought back by pushing at holes in Blair’s defense, and tied up the set at 16-16. In the end, the Blazers managed to edge out the Wildcats and win the set with a score of 25-22.

The fourth set started with aggression from both teams. The set began with possession alternating back and forth, keeping the score close. The Blazers stepped up the offense with crucial back row kills from senior co-captain Olivia Freer, and quickly took the lead. Double touches by WJ and strategic kills by sophomore middle Tori Boggan secured the set for the Blazers 21-8.

With two sets won in a row, the Blazers could not be stopped. They swept the fifth set, 15-9.

Boggan emphasizes that the loss of two senior players definitely impacted Blair’s performance. “We would have won in three sets if our best blocker was not injured. However, I’m happy that we brought it back, and I’m excited for the season going forward,” Boggan said.

The Blazers play their senior night game against the Churchill Bulldogs at home on Friday, October 25 at 6:00 p.m.