Originally anticipated to be the closest meet of the month, the Blazers' (20-2) wrestling match against the Clarksburg Coyotes (7-6) on Wednesday night was ultimately a sweeping 42-24 win for Blair. The Blazers led in score throughout the full meet, showcasing their unparalleled mental strength built on demanding conditioning in the training room.

Prior to the matches, the team celebrated Teacher Appreciation Night, where each wrestler nominated their favorite teacher and wrote them a grateful letter. Over 30 teachers were present, sharing a collective moment of appreciation with the student athletes. English teacher Carly Moore, nominated by junior Tito Lozano, was surprised to be nominated as a first-year teacher. "It was unexpected but gratifying to have a student feel they got something out of my class and connected with me as a teacher," Moore said.

In the 120-pound weight class, senior Sideeg Abdulla pinned his opponent within the first minute of the match, boosting the score 16-9. The quick pin also boosted his confidence after matching against two state-ranked wrestlers earlier in the season. "I saw an opportunity when he shot too far out, so I sprawled, moved to the side and did a near side cradle," Abdulla said. "It felt pretty good because it was my first home win of the season."

Junior and team captain Brian McCaw scored 5 team points in the 113-pound weight due to a technical fall. In the 126-pound weight class, senior Aidan Rogers emerged victorious with more individual points, advancing the score 24-9 in Blair's favor. Sophomore Nikolai Tochilin resisted throughout his match but was ultimately pinned by Clarksburg in the 132-pound weight class. 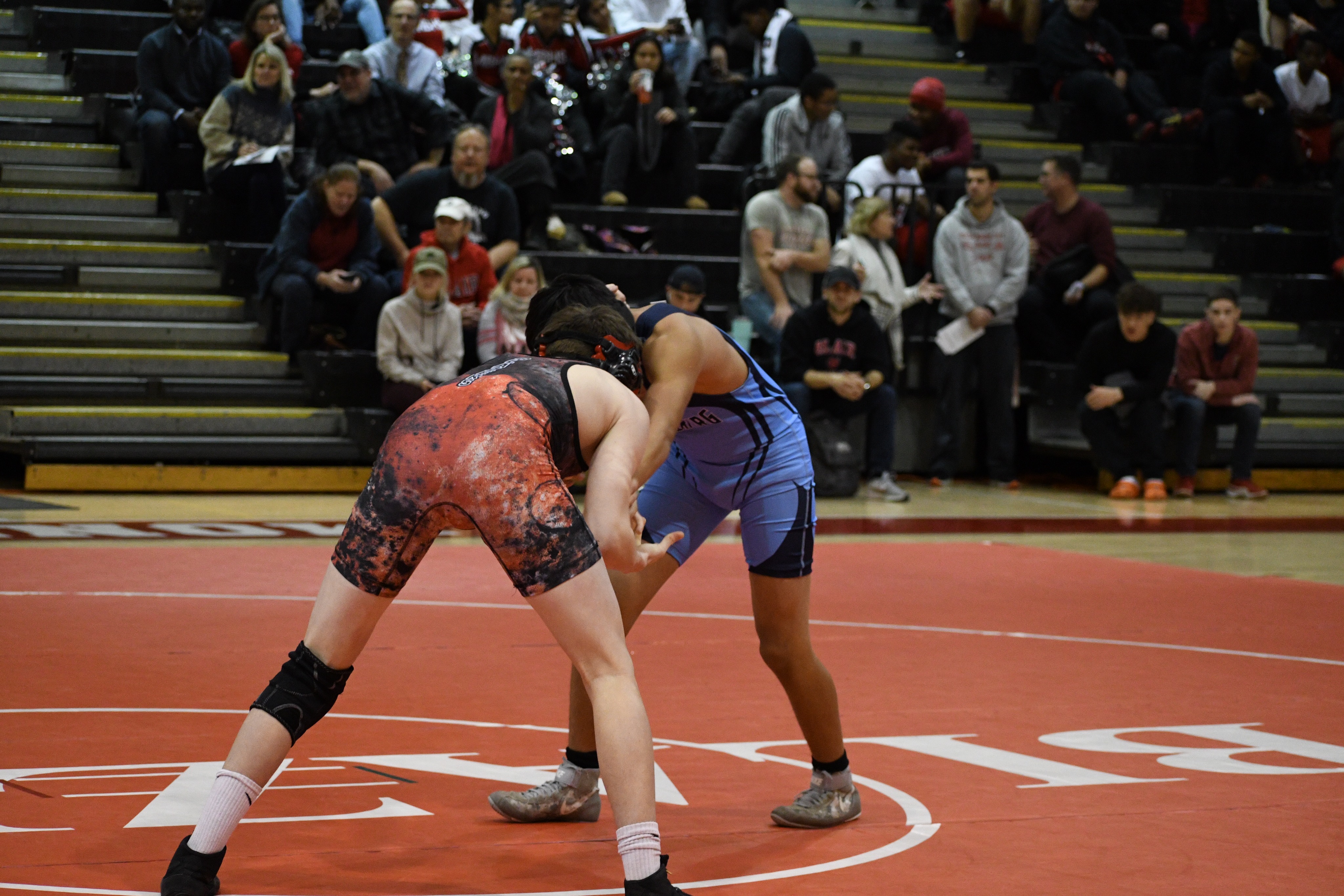 Photo: Senior Aidan Rogers sets up his offense early in the first period.

Photo: Senior Aidan Rogers sets up his offense early in the first period.

In the 145-pound weight class, spirits soared as senior Nimesh Fonseka pinned his opponent with 16 seconds left in the match, increasing Blair's lead 30-15. "The guy was really strong and he ankle picked me in the beginning but I worked back up quickly," Fonseka said. "I threw him on the ground and I think he just gave up."

In the 160-pound weight class, senior Jason Kaplan and his opponent each had a takedown, ending with a tie. Although his opponent was strong, Kaplan won the match during overtime due to mental strength. "We work really hard in that room every single day just so we can be confident in those circumstances," he says. "It came down to the mental side of things and I just wanted it more." His match secured Blair's team win for the night, the score now 36-18 in favor of the Blazers.

In the 170-pound weight class, senior Shalom Ayivi was pinned by his opponent, but sophomore Izu Nweke ended the meet on a high note for Blair, pinning his opponent and finalizing the score 42-24. "It made me feel happy because people came out to support me and I was able to put on a show for them," Nweke said.

Head coach Tim Grover was impressed by the huge win, especially because the match with Clarksburg is tight every year. "The past five years it's been a one- or two-point difference in the team score," he said. "That was going to be one of the toughest matches of the month, so we should be able to string together more wins in January."

Kaplan noted that just getting out on the mat is a celebration on its own. "Just going out there and being able to beat someone up for six minutes is the celebration," he said. "The work is done every day in the room, so it's great to get a chance and showcase what we've done."

Grover and the team captains were enthusiastic about what this meet means for the future. "We're really looking toward those regional ranking, county rankings and state rankings," Chen said. "This was just a check off the box as we look toward to big teams like Damascus and Springbrook."

The Blazers will play their next home meet on Tuesday, Jan. 14 against Northwood at 6:15 p.m.