Blair washes up against Wootton

Senior co-captain Emily Lathrop admitted that the Patriots are one of the most difficult teams that Blair will swim against. "It was a really tough competition. Wootton's the top competition in Division I," she said.

According to co-coach James Demma, the Blazers have had mixed results from past meets against Wootton. "We beat them during the regular season last year, but then we lost to them at divisionals," Demma said. 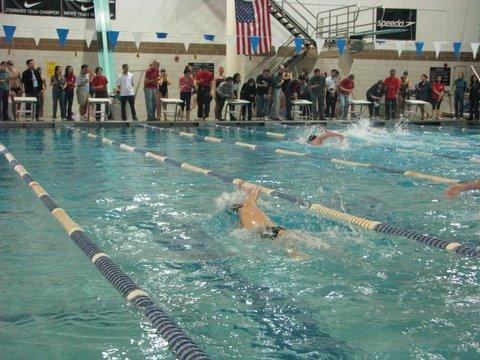 Co-coach Kelly Crowder was happy to see a few improvements after last week's meet, even if this week was another tough loss for the Blazers. "Our finishes and turns looked better this week. Those types of finishing touches are looking better, which is great to see," Crowder said.

The dive team has also been improving recently, according to junior co-captain Brian Huang. "The divers were pretty good today. We were solid," said Huang. "For the next meet, we hope to have four divers, two girls and two boys."

A few individual swimmers, including sophomores Ethan Amitay and Brian Tsau and junior Luke Hammond, helped keep the team afloat according to Demma. Tsau swam especially well, even breaking his record for the 200 freestyle race, with a time of 1:44.87. "During this meet, I swam faster than most of my meets last year," Tsau said. "Against Churchill [the team's next meet] I would like to take a shot at the 500 freestyle and my own 200 freestyle records."

Despite the disappointing scores this week and last week, Huang believes that being in Division I has its perks because it provides a chance to improve during every meet and competition that the team wouldn't have if it were in another division. "If we were in Division II, we'd win every meet," Huang said. "I think being in the bottom of Division I is better than being at the top of Division II."

For the team's next meet, against the Churchill Bulldogs, Coach Crowder would like the Blazers to continue to put in as much effort as they can. "Our goal for every meet is to win, always to have the kids take every race seriously and leave everything in the pool," Crowder said.

Blair swim and dive team's next meet is on Saturday, Jan. 5 at 5:15 p.m. at the Rockville Swim and Fitness Center.