Senior Chris Wells stood on mat four, staring down Suitland High School's DeAndre Norman. The whistle blew, and the two began to trade hits, searching for each other's weaknesses. Within 20 seconds, Wells scored a takedown on Norman. Wells went on to crush his opponent to win his first consolation match, and eventually placed sixth in the Maryland state wrestling tournament. 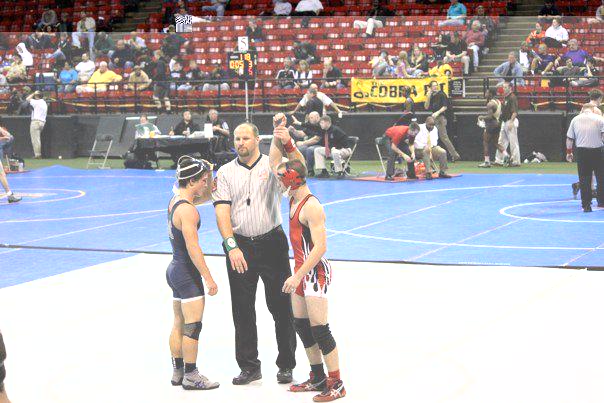 Last week, Wells (132) clinched the third playoff spot in his weight class for the 3A/4A West State Wrestling Championship. Two other Blazers, sophomore Oumarou Bitang (120) and senior David Chow (195), also placed at regionals, but did not qualify for States.

Things looked good for Wells at Friday night's tournament when he pinned Milford Mill's Jay Henderson at 5:32 in his first match. However, he was knocked out of the running in the next round by Anne Arundel's Tyler Goodwin, the eventual first-place finisher.

Wells returned Saturday morning, ready to fight for third -- the highest place he could earn. He swept Norman and Magruder's Andrew Conine, 10-4 and 5-3, respectively. Although Wells was unable to pin either opponent and won each match by decision, he led by wide margins the entire time.

"He was aggressive and in control," head coach Jake Scott said, pleased by Wells's strategic play. Wells believed focus was vital to the wins. "I tried to pace myself, build the lead and then play smart for the rest," he said.

The third consolation match, however, proved to be a challenge. From the start, Wilde Lake High School's Malik Jackson used his height to his advantage against Wells, who ended up getting rolled over and spun in a circle on the mat. "Chris was getting cranked pretty hard on his back," assistant coach Stephen Banvard commented.

Wells expressed his frustration after losing 1-8 to Jackson. "I like to do a cradle on my opponents, but it's hard when they're so tall, and I can't get my hands around them," he said. Banvard agreed, "[Jackson] was not much better, just taller."

In the final round, Wells faced Leonardtown's Alex Truitt in a highly competitive face-off. For a good part of the match, the two were neck and neck at 2-2. During the middle of the second period, Wells was on top of his opponent, about to take a shot. Suddenly, the ref blew his whistle, announcing that Wells had been locking his hands, an illegal move that gave his opponent two extra points. Wells tried to come back from the two-point deficit and managed to bring the score to 4-3 after the ref awarded Wells one point for his opponent's illegal stalling. Despite this additional point, it was too difficult for Wells catch up so late in the period. As the buzzer sounded for the end of the match, the score was Truitt – 4, Wells – 3, giving Wells a sixth place finish.

After the match, senior co-captain Billy Saturno commended the hard work of both athletes. "[Truitt] is a good wrestler," he said. "Sometimes, you don't win. The locked hands hurt [Chris]," Saturno said of Wells's penalty in the second period.

"It was a good match," Wells said, noting Truitt's leg-riding strategy. "It's tough to do anything while you're being leg-rided; you're immobilized."

Despite finishing 3-3 in the tournament, Wells was pleased with the final results. "I've wrestled great. My first loss was to a state champion," he said. "Otherwise, I've beaten two guys from out of county, and the other guy I beat was a county champ."

He also accomplished what he set out to do. "My goal was to place," Wells said. "I've seen a lot of good wrestlers who are lucky to even win a match. You have to be at the top of your game to place here." The last time Blair placed at States was when Kekura Musa placed sixth in 2009.

The Blair wrestling team applauded Wells's performance. "He's the only Montgomery County guy at his weight class who's placed," Saturno said. "He had a great season and has been a great leader." Banvard added, "Chris was awesome yesterday, and today, he has surpassed my expectations."

Although he earned his spot with the best wrestlers in Maryland, Wells believed he couldn't have done it alone. "I want to thank the wrestling team; the past two years with them has been an honor," he said. "I'm proud to say I placed with the help from everyone on this team."