In their first match back from winter break, Blair’s varsity wrestling soundly defeated Wheaton high school 64-13. This win brings the team to an undefeated record of 7-0 and ranks them first place in the county.

Sophomore Brian Mccaw (106) was the first wrestler for Blair and quickly pinned his opponent with 30 seconds left in the first period. “I felt great out there and knew I could get a pin against a team like Wheaton,” Mccaw said after his match. This win gave the Blazers an early 6-0 lead that they never gave up.

Next up was senior Mohammed Baig (113), followed by junior Moses Ritti (120). Both fell behind early in their matches but fought back and pinned their opponents. The Blazers showed great determination and held a commanding 18-0 lead after the first three wrestlers. 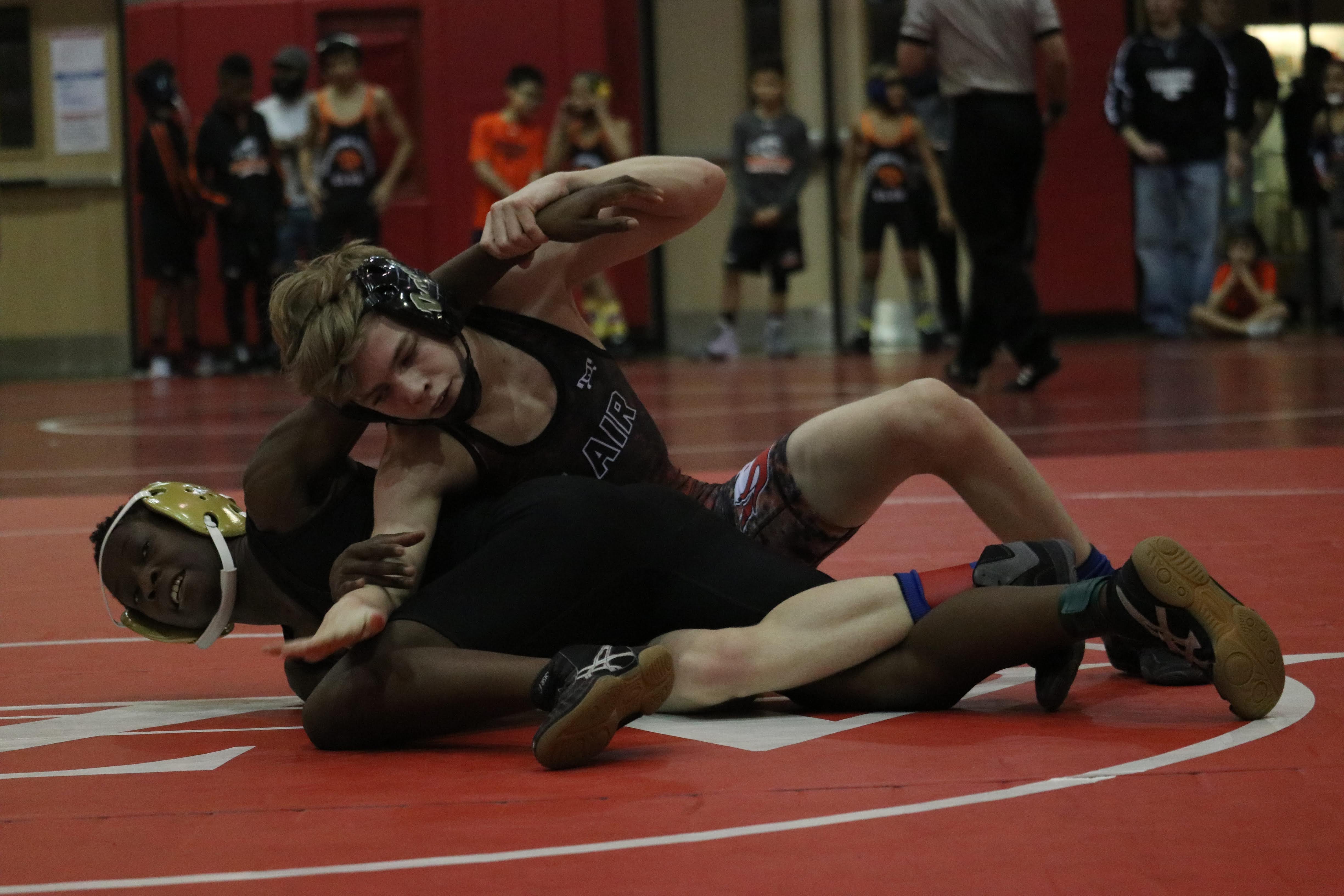 Following Bitti was freshman Nikolai Tochillin (126), who nearly got pinned in the first period, but fought off being cradled by his opponent. Unfortunately, in the second period, he was defeated, getting pinned. This loss by Tochillin was only one of three by the Blazers all game, making the score 18-6.

Blair won the next 3 matches due to pins by senior Beruk Tona (132), freshman Junior Kim (138), and Junior Jason Kaplan (145). Tona quickly pinned his opponent in under a minute, while Kim’s pin wasn’t until late in the third period, each earning the team six points. Kaplan pulled his opponent down to the mat relatively early. “My takedown early in the match really helped me feel in control the rest of the way,” Kaplan said. These three wins widened the Blazers' lead to 36-6.

Junior Steven Vilmenay (152) fought hard to keep the score even through two periods, until a technical foul in the third period was called on him for arguing with the referee. That foul gave the Wheaton Knights a team point and the momentum they need to win the round, bringing the score into double digits, 36-10.

Junior Shalom Ayvivi (160) and senior captain Ernest Son (170). Both easily defeated their opponents, pinning them in the second period. A win by the captain, Son, was a great morale boost for a team. Blair's lead after Son’s win was now significantly wider, with the score being 48-10.

Senior Brandon Ntankeu (182) was one of the few match wins not by pin for Blair. He capitalized on an early lead in the first round and never gave it up. Ntankeu ended up winning by eight points, a major, which awarded the Blazers four more points, making the score 52-10. The match was all but over with only three wrestlers left.

Next up was Junior captain Elias Chen (195), who pinned his opponent on the mat after only a minute of wrestling. Senior Joel Paulino (220) followed Chen, but fell behind early and was never able to recover. That round was Wheaton’s third and final win of the meet, bringing the score to 58-13.

Last but not least was junior captain Mervin Mancia (285), who capped off the meet with a compelling win, pinning his opponent in under thirty seconds. This finalized the score to 64-13.

The Blazers finished strong in a big win against the Wheaton Knights. The team hopes to carry this momentum into their next match this Friday, January 4th, at 6:15 PM against the powerful Clarksburg Coyotes.