Blair wrestling team gives back to the community

The team volunteered at A Wider Circle over winter break.

This winter season, the wrestling team has been on fire, with a 24 - 2 winning record. Wrestlers are not only performing well in wrestling matches but also sharing some of that success with the less fortunate through volunteering at a local nonprofit.

The team volunteered at A Wider Circle, an organization dedicated to helping the impoverished through employment assistance, neighborhood revitalization and proving those in need with furniture and other goods that may be difficult to access. Blair wrestlers spent one day over the holiday break to sort out donated commodities and move other heavy goods. "We were in there sorting sofas, putting them onto their display cabinets, moving TVs or sorting out and cleaning kitchen supplies or appliances, which can be reused and given to people who might not be able to buy them for themselves," senior team captain Elias Chen says.

Coach Tim Grover organized a day for the teammates to volunteer at an organization for the past three years. He initially hoped to go to a different charity each year, but that proved to be difficult with the size of the group. "Ideally I wanted to rotate through a couple of different charities from year to year. But I found that that's actually been more of a challenge than I expected. A lot of nonprofits are smaller and they definitely need help, but not necessarily in the form of 70 people showing up for a few hours," Grover says.

Grover hopes that the work the wrestlers do will help them be more thankful for their own lives. "I think it helps our wrestlers stay a bit more grounded about how lucky they are and to be thankful for what they have and keep things in perspective. Losing a wrestling match might be devastating at the time. But then if you can kind of put it in the context that you're at a great school and getting a great education, maybe a losing wrestling match is not so bad," Grover says.

The wrestlers take that lesson to heart, paying attention to what they learn volunteering. "Seeing the stuff that people don't have that we take for granted like, like a couch or a mattress really drives the hardships that are going on around you that you don't even notice," junior wrestler Brian McCaw says. The experience also opened the wrestlers' eyes to how many people in the community are disadvantaged. "I didn't know how many people are in need around this area. I'm so used to looking around with everyone dressed up and when you go there, it's a whole different world. It changes your perspective," senior captain Mervin Mancia says. Volunteering also made the teammates realize how they could help those less fortunate with what they have. "It really gives you another dimension of how the gifts, physical and mental, that you have been given can be applied to help those around you," Chen says. 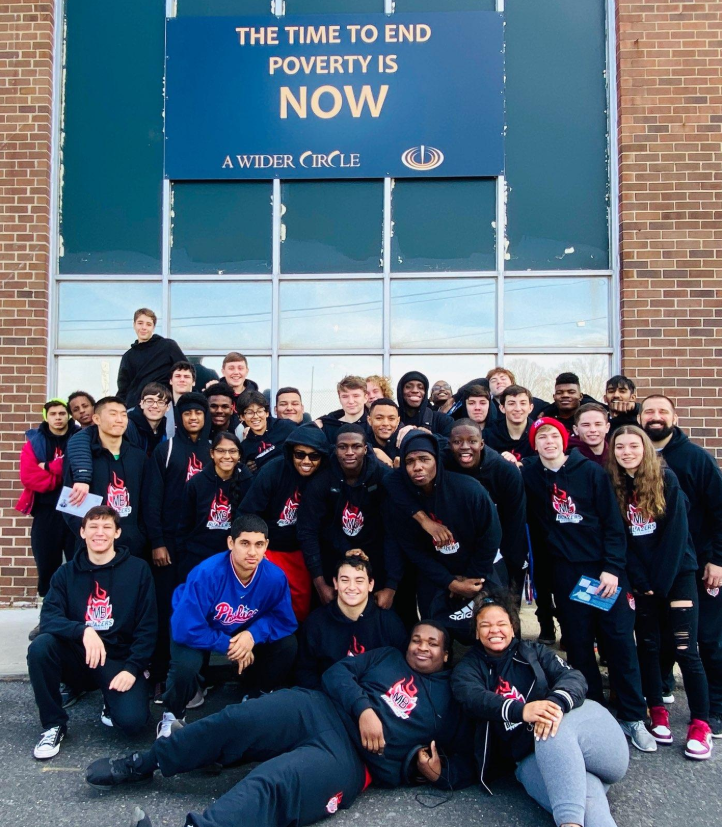 Photo: The Blair wrestling team volunteers at A Wider Circle over winter break.

Photo: The Blair wrestling team volunteers at A Wider Circle over winter break.

The team not only helped those in need, but had fun and bonded during their volunteer work . "Besides working with the poor, we had a lot of fun out there because we got to talk and we got to do everything together. It was just a really good, fun experience," McCaw says.

Along with the coach, the wrestlers also feel it is important to give back to the community as someone on the Blair wrestling team. "When you're a member of the wrestling team, there's a responsibility not just that you're an athlete, but that you're building strong character. If you can utilize the skills you have on the mat off the mat, that's what really makes you a good wrestler and not just a good athlete, but a good person," Chen says.

Blair wrestlers not only believe it is their responsibility to volunteer, but see the opportunity for other sports teams to volunteer as well."If wrestling, which has the longest and toughest season of any sport, can take a day out of their season to go help a community service organization, every team can do it. This is a great way to really take those values and help people," Chen says. "It shows you that sports is bigger than just sports and it shows you that you need to help the community and get to know what's going on," McCaw says.

Ultimately, the wrestlers hope they can make a positive impact on the local community through volunteering as a team."Having a team show up in our uniforms, I think it shows the people in the community that Blair is here and there are a lot of good things happening with our high school," Grover says.