The other Blair Blazers

"Get your weed," decrees Three 6 Mafia from the car stereo. "Get your blow. Get your drink together. Cause we about to get high."

It is 2:15 p.m. on Oct. 10. There is no drink or blow here, but single-gram "dime bags" holding small, dull-green clusters of the Cannabis sativa leaf are in abundant supply. And despite all lack of indication that the half-dozen Blair seniors packed into the car of James, a senior, will soon be blasted sky-high, it is more or less understood: Today, they will do what they have done practically every day since the beginning of the school year and are planning to do every day this week. As Three 6 Mafia declared, they are about to get high.

In the front passenger seat, Dan, a senior, chews obsessively on the end of a drinking straw. The car rocks with the music's pulsating bassline, and nobody talks. There's no hint of anxiety and no anticipation. 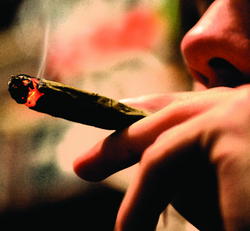 After all, smoking pot isn't a novelty; in a 2003 study of high-school students, nearly a quarter of respondents admitted to having smoked marijuana sometime during the previous 30 days. The National Institutes of Health (NIH) reported in 2002 that over 14 million Americans ages 12 and older use marijuana at least once a month. And, as one of the seniors sees it, pot is a decompressor no different from video games or an afternoon nap. "If you sit at school all [expletive] day, all you wanna do is smoke," he says. "It's a stress reliever before you have to go home and do more work."

For these students, as well as the six percent of high-school seniors who smoke on a daily basis, according to a University of Michigan study, the consumption of the ganja is less ritual than it is a part of the daily routine, less an occasional luxury than a means to, as one senior puts it, "get in the right frame of mind."

Or, in layperson's terms, to get high. Every day of the week.

The side effects of excessive use of marijuana are well-documented. According to NIH, once a user has inhaled marijuana smoke, Tetrahydrocannabinol (THC), the main psychoactive ingredient in pot, will quickly pass from the lungs to the bloodstream and into the brain. Once there, it will bind to neural receptors and influence everything from motor control to short-term memory. Certain studies have linked marijuana to depression and antisocial behavior. Others have shown that it causes respiratory problems and quadruples a user's risk of a heart attack during the hour after the initial high.

But the seniors are oblivious to these consequences. "The only reason people don't do it is 'cause they lie and say it's bad for you," says Dan.

One of the seniors acknowledges that pot can cause short-term memory loss, but he insists, "It's not like important memory loss. It's stupid [expletive] you forget, like specific stupid things. If you're him," he says pointing to one of his buddies, "you might forget your keys."

"Or where you parked," his friend adds with a chuckle, recalling a frustrating and delirious search for his car.

It's a common refrain for weed users: Their habit is harmless entertainment, recreation, relaxation. As Drew, a senior and a frequent member of the group of smokers, puts it, "Some people like baseball, some people like football. I like smoking weed. I also like football."

"It's like going to a basketball game, or to a movie," says James. "But you can't sell your extra movie tickets." Wherein lies one of the drug's other perks: The habit practically pays for itself. It's not uncommon for users to refill their stashes and fill their pockets using money made on the sale of surplus weed. And with a group of close, weed-smoking friends, customers are never difficult to find.

Indeed, marijuana is a popular drug of choice, possessing a remarkable and troubling ability to unite people. Drew says that grass has helped him rekindle many of his middle-school friendships, while James recalls one nameless classmate he skipped photography class with to buy and then smoke weed. "We turned to each other," says James, "and he said, 'Wanna light a J?' It's just a thing people share. You can build friendships."

The group that has gathered to smoke today is a testament to the green herb's uniting power. There are whites, Hispanics and Asians; honors students and near-dropouts; people who, at least outwardly, share only one common thread: the gigantic blunt that Dan is slowly and meticulously rolling and from which they will all soon smoke.

After using a pair of scissors to break apart the coagulated lumps of cannabis, Dan creates a surgical incision down the center of a cheap cigar, removes the tobacco and the small paper strip of nicotine, licks the inside, carefully packs the weed into the blunt and rolls it.

He produces a lighter and, in broad daylight, in the side yard of an unassuming house on an unassuming street, with the normal pace of life continuing in the surrounding side streets and neighborhoods, the students begin their daily one-and-a-half hour long vacation from responsibility, reality and anxiety.

They begin to blaze.

The intake today is small, as the eight smokers take turns sucking down a single blunt. Each smoker spends a minute or two taking hits, expelling the smoke from his lungs and relishing the onset of the THC before passing the blunt to his left. Some look on meditatively, while others nervously brood over the table. Some release the smoke slowly from their lungs; others cough, spit out the occasional piece of ash and recuperate for the next round. James lets out a slight whimper when he takes his first hit, recovers, takes another one and passes it on. Already his eyes are reddening.

The signs of physical and mental change are initially difficult to spot. "Everybody's eyes get smaller and redder, and their smiles get bigger," notes one of the seniors. But their behavior hasn't changed, and they seem just as relaxed now as they were a half-hour ago when they left the Blair parking lot.

The group disagrees as to what that means, but all agree that different people have different highs. One of the smokers says that being high makes him more awake and sensitive. Another finds it harder to concentrate while high, and still another says that close concentration can make a high quickly disappear. A fourth observes that the high also depends on the quantity smoked and the method used to smoke it. A bong, for instance, will cause a quick, jolting head rush, while a blunt makes for a more relaxed and gradual high. The type of weed smoked is another important factor. "Purple haze puts you straight asleep," says James's dealer, a junior at Blair. "And 'dro, it gets you high for eight hours."

Regardless of type, if weed is smoked in volume, as during one of the marathon 10-hour, eight-blunt sessions Drew occasionally indulges in on Fridays and weekends, the high is cumulative and begins to border on the hallucinogenic. "When you start seeing your world move in little frames like in a movie... that's when you're high as [expletive]," he says. "You also see crazy colors, you laugh a lot... You get a really detached feeling."

Drew stands next to the table, waiting for his turn to come. He joined the group of regular after-school pot smokers almost by accident, learning of his former middle-school friends' frequent smoking sessions only when he forgot his bus number early in the school year and found himself without a ride home. "So I'd hang around the halls and see these people after school every day," he explains, "and we just started blazing."

The blazing is over for today. James's car now reeks of cannabis and wintergreen as the smokers try to remove all evidence of their afternoon activity. They chew on sticks of gum, pass around an eyedropper and blast Three 6 Mafia. All things considered, James is doing a remarkable job of navigating the twists and turns of Sligo Creek Parkway, although he rejects claims of the drug's negative impact on reaction time while driving. "It doesn't affect you," he maintains. "If anything, it makes you drive slower."

Frequent pot users, it seems, are as high on self-justification as they are on their beloved herb. It's like smoking a fine cigar, explains one junior, in that it can be enjoyed, savored and appreciated. Or it's like having a hobby or like watching a movie or a sporting event. One female senior maintains that it's not the drug that does damage to individuals but rather a deficit of self-discipline. "You have to have a strong enough character to be able to handle it," she explains.

Forget that today's weed contains nearly 200 times more THC than weed from only a few decades ago, according to health teacher Susan Soulé. For some users, the only difference between a joint and a cup of coffee is that a joint has better resale value.

But according to Steve Sussman, a psychology professor and co-director of the Transdisciplinary Drug Abuse Prevention Research Center at the University of Southern California, chronic users mistake a severe addiction for a favorite hobby and self-medication for harmless escapism. The real consequences begin when the smoking stops and a chronic smoker, accustomed to the emotional manipulation that attracts so many to the drug, finds that he or she has difficulty experiencing pleasure, experiences instability in personality or learns firsthand the withdrawal symptoms that 75 percent of chronic users experience.

And the motivation always runs deeper than the desire for a fun afternoon with friends. Sussman says that excessive users are turning to the drug as an aid in dealing with deeper, more personal issues. Daily users are, in his words, "feeling uncomfortable at the baseline."

But the passengers seem comfortable enough, given their apathy towards their driver's impaired state. It is ironic, then, when one of the seniors admonishes his friends to buckle their seat belts. "I'm pretty sure we're high as [expletive]," he says. "Safety first!"