One-hundred-fifty Blair students were presented 36 different awards during the annual Blair Awards Night on Wednesday, May 25 at 7 p.m. Presenters said this year's awards ceremony is "a particularly difficult one" because of the recent death of senior Andrew Helgeson, who was to receive the Terry Hicks scholarship. 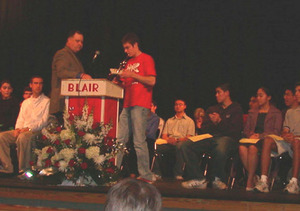 Students filed onto the auditorium stage to the national anthem, performed on the piano by junior Dena Tran, who received the Fine Arts department's Outstanding Piano Student award. Master of Ceremony, vice principal Linda Wanner, introduced 13 award presenters, among whom were Blair teachers, representatives from the U.S. Marine Corps and Charles Hatcher, a speaker from the Silver Spring chapter of the Kappa Alpha Psi fraternity.

After Wanner described the Terry Hicks All-Around Student award, a scholarship started by Blair alumni in 1984, French teacher Arlette Loomis made a speech on behalf of Helgeson's family. Loomis, who taught Helgeson and his sister, praised the Terry Hicks award recipient as a "genuinely good person." She believes that he was "lucky" that he knew he got the award before passing away. Everyone in the auditorium observed a moment of silence in memory of Helgeson, and administrators passed boxes of tissues around both on and offstage to those who were crying after the speech.