The 18-decibel (dB) clink-a-clank of ice rain on the roofs of cars had already stopped by the time people filed into the auditorium on Jan. 7 for the Winter Choral Concert. Rustles of clothes (4 dB), shushed conversations (17 dB) and energetic greetings (20 dB) quickly died away as Blair's talented singers raised their voice in song. "Lead Me Home" was the softest and slowest piece, at 62 dB. There was a perky "Material Girl" at 74 dB. The loudest sounds at the concert were the jubilant, 87 dB cries in the "Hallelujah Chorus." Surprisingly, although the singing was amplified and several of these choral performers left the concert with sore throats from singing their best and loudest, the overall sound level at the concert was in the same range as the noise level of Blair's hallways on a regular day at school.

Blair Boulevard, between classes on Jan. 6 for example, was buzzing at 70-90 dB according to a decibel meter sound-level reading. HowStuffWorks.com says that an exposure of more than eight hours a day of this intensity of noise can permanently damage hearing. According to students and teachers, the ambient noise level is not only harming students' ears, it could also be impacting their learning.

"I fear for my ears"

According to the Metropolitan Opera Guild and HowStuffWorks.com, a quiet room has a sound level of around zero to one decibel, a standard measurement of sound. Whispers are 15 dB. Normal conversations are 60 dB, and rock n' roll fans beware! Music at 120 dB (rock concert sound level) can actually tear up the inner ear forever, and therefore, listeners can literally feel the pain. 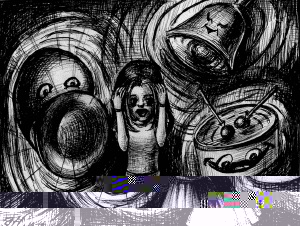 While Blair's noise readings are usually only at the intersection-traffic level, the stairs before lunch frequently echo with 100 dB screams and squeals, which, if not bloodcurdling, were at least ear-splitting.

Many people say that their ears have become immune to these loud noises at Blair and at all the wear and tear. However, contrary to popular belief, being around loud noises constantly cannot toughen up people's ears and get them used to excessive noise. "If you think you have grown used to a loud noise, it probably has damaged your ears, and there is no treatment, no medicine, no surgery, not even a hearing aid, that truly corrects your hearing once it is damaged by noise," the American Academy of Otolaryngology (ear, nose, throat specialists) writes on their website.

The gravity of noise pollution's impacts means that those overly-enthusiastic "wuzzup"s from friends and those cheers, curses and exclamations we hear at school everyday will influence the health of our ears forever. As junior Angela Cummings puts it, "I should really fear for my ears when I get to school."

Too loud to learn

In an informal poll of 100 Blazers on Oct. 15, 73 percent said they thought Blair was too loud, and 56 percent of those polled thought the noise was affecting the school's educational quality.

"All this noise pollution is really distracting our learning," Cummings states. "During classes, you hear loud foot beats, and you know someone's running down the hall. Then as they pass your classroom, they feel they have to scream obscenities, and everyone in the class hears it and they all have to stop doing their work and either laugh or shake their heads," Cummings says.

The students are not the only ones who suffer from these distractions, Cummings says, explaining that teachers are affected as well. "The teachers just stop teaching or get thrown off track because they don't find [these distractions] cute at all. These interruptions are driving the teachers mad," Cummings elaborates. "Sometime, my teacher breaks down on us because of the noise and says: 'I-I-I-I can't focus with all this talking and whispering!' And for the rest of the class we have to be absolutely silent."

Junior Rosa Cruz also believes Blair is "way too loud. It's crazy how loud we are. It's very hard to concentrate when you are in a classroom that's overcrowded and everyone is talking to begin with, and you can hear all the noise from outside the classroom too," she says.

Other students, such as freshman Boris Vassilev, think that Blair's noise level is not a problem. "The noise level at Blair is pretty moderate. There are people yelling sometimes and things like that, but all in all it is pretty quiet during the day, except for that guy ringing the cowbell that goes up and down the 230's hallway right after lunch," Vassilev grimaces as he recalls the 90 dB clang of the bell. "He's really pretty loud."

No place for quiet

With 100-dB shrieks and 90-dB bells, the school's hallways do not seem to be good places to find peace and quiet. The only refuge left is the library.

Clumping around tables, ignoring the "4 to a Table" signs, students laugh without control and bicker without constraint. With faces plastered to computer screens, other students bawl over some joke they found online. Bitter tirades pour out like laundry lists from some spots where people whisper to each other across the room about someone's "two-timing" boyfriend. At these times, Blair's Media Center seems less like a place of study than a soap opera on daytime TV.

Mary Wild, a Media Center Specialist, feels compelled to "tell students to hush up at least a thousand times a day," which is understandable as Media Center noise levels can reach up to 95 dB, whereas a quiet library should be at 30 dB according to HowStuffWorks.com. "Telling students to be quiet has become part of the whole library syndrome here, like 'where's your ID?' 'Please don't eat food here,' 'Please don't bring your water here' and 'The printer is over here.'" Wild gestures to a group of kids who are raucously tossing a joke around and says, "It's getting too noisy over here again! Please be quiet!"

Wild cannot name a specific instance when the Media Center is particularly loud, but she recollects clearly the one time when the Media Center was uncharacteristically silent. "The only time I can remember the Media Center being absolutely quiet was when [a student's] cell phone went off and the room got so quiet, you could've heard a pin drop. And you could almost hear people thinking: 'Oh! Someone's gonna get in trouble!' But other than that, it's usually loud in here a lot of the time. It's loud at lunchtime; it's loud when there are multiple classes in here; it's loud on full moons!" Wild laughs at her list. But she is immediately distracted by another group of chatty youngsters. She raises a warning finger as she tries to hush them, "Shhh! Be quiet, please!"

With all this noise, the inevitable shushing sound is everywhere at Blair. Shushed inside classrooms. Shushed in the Media Center. Teachers even feel obligated to pop out of their classrooms from time to time to shush students in the hallways. There is probably only one occasion when we are permitted and even encouraged to talk, cheer, even scream in excitement as loud as we can. That's during pep rallies.

During 5A lunch on Oct. 8, the speakers atop the SAC stage are booming at 94 dB, which is louder than lawnmowers and truck traffic. Students danced and rapped. Teachers smiled on.

At the pep rally that day, the noise level hit the ceiling at 104dB during the senior cheer. The second loudest noise was the freshmen class cheer, commingled with boo's, at 96dB.

Drums were drumming at 89dB and ladies on the Pom and cheer squads were dancing to music at 82dB. The noise never once sank below 69 dB.

Though those of faint heart might cringe at the noise, freshman Christian Turcios was not at all bothered by the sounds. "I think [the noise] is cool! It's tight! Nothin' wrong with the noise," he says while clapping and hooting for the cheerleaders' routine. "This is a pep rally. It has to be loud!"

A sophomore friend yells his agreements to Turcios' sentiments over the chant of the enthusiastic crowd. "This is the way it's supposed to sound!" he hollers.

Cruz, who doesn't usually like loud noises, agrees with Turcios too. "I think that there are times when it's okay to be loud," she says. "The pep rally is one of those times. It's okay to show emotion and scream because everyone enjoys it."

SGA sponsor Rondai Ravilious did not share the students' appreciation for the noise at the pep rally, however. "Oh my God! Can you believe how loud it is in here?" She implores, throwing her hands up and searching the ceiling for an answer. But she had to admit that the noise is understandable, "because all the students want to be loud to show they are proud of their football team and their school."