The space is now used for new lunch tables

Over the summer, several lockers near the courtyards on Blair's first floor were removed to create additional lunch seating space and to accommodate the school's increasingly large student body, which now stands at more than 3,100 students. 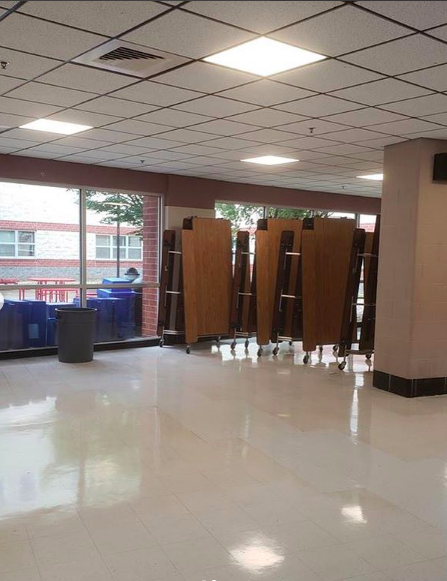 Photo: Two banks of lockers were removed from the first floor over the summer and are now used for more lunch seating space.

Photo: Two banks of lockers were removed from the first floor over the summer and are now used for more lunch seating space.

Blair's cafeteria can only hold 766 students, a small number considering the huge population, which presents a challenge on colder days when students cannot eat outside in the main courtyard and are crowded into the halls, according to Principal Renay Johnson. Johnson said the new seating arrangement — round tables with benches and counters with charging ports — is more "high school friendly" and addresses spacing concerns. Until those tables arrive, students can sit at the brown cafeteria tables in the locker area.

As opposed to upperclassman, who had to request lockers through a Google Form posted on Johnson's Twitter, all freshmen were assigned a locker to "help them have continuity from middle school," Johnson said.

Johnson hopes to create even more open spaces in the future. "If this goes well, and we see that fewer and fewer kids are requesting lockers, then next year my goal is to do the same thing on the second, and eventually the third floor," she explained.

This summer's locker removal procedure stemmed from the results of a random survey conducted by Blair staff last year, Johnson explained. Staff members found that only about 1,000 students used hallway or gym lockers, of which only 600 students used their assigned hallway locker every day.

Junior Kasey Hammond supports the change. "I’m definitely not going to sign up for [a locker], because it just serves no purpose to me. I think it’s great that there’s going to be more lunch space — my friends and I would sometimes complain about how cramped it was," she said.

Funding for these renovations was provided by Montgomery County Public Schools and did not impact Blair's budget.