Since 1998, a silent, caring spirit has watched over Blair's gymnasium. He has seen the excitement of pep rallies, heard the roar of basketball games and witnessed the victory tears welling from cheerleaders' eyes. He watched the boys' volleyball team on its recent path to glory from 2005 to 2006 and the excitement of the boys' basketball team's clincher this year on senior night. Through tragedy and triumph he has supported and uplifted our spirits, yet few acknowledge this hero. Looking across the gym, one's eyes are immediately drawn toward the iconic Superman Blazer, blasting from the far wall, a reminder of the real superhero of Blair sports who is commemorated with the words "In memorial of Nelson H. Kobren." 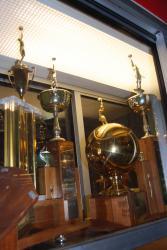 Photo: As a coach, Kobren helped Blair to fill its trophy case by bringing his teams to many championships, including leading both the soccer and tennis teams to be state champions in 1964.

Photo: As a coach, Kobren helped Blair to fill its trophy case by bringing his teams to many championships, including leading both the soccer and tennis teams to be state champions in 1964.

Under Kobren's careful watch, Blair sports teams are making the transition from winter to spring seasons, and Blazers reside in a limbo between hope and reality. Teams have a choice: aspire for a perfect season or face a reality of falling to formidable 4A competition. The late coach Kobren always did the former, and his boundless optimism helped him lead both the varsity tennis and soccer teams to state championships in 1964. Kobren taught both physical education and drivers' education at Blair from 1959 to 1994, never missing a day of work for 35 years, according to his obituary in The Washington Post. He also served as Blair's athletic director for 29 years from 1965 to 1994.

In the midst of his time at Blair, Kobren managed to find the time to found the Metropolitan Washington Soccer Referees Association, of which he was President and executive board member. As both a community leader and Blair loyalist, Kobren's dedication to his school and community remained an inspiration to striving Blazers even after his death in 1996.

Kobren's life-long devotion to strength and athletics began in his service to the Army from 1954 to 1956 in Germany. When he returned, Kobren earned a degree in physical education from Columbia University with additional graduate study at the University of Maryland. After working at Maryland for three years, he moved down University Boulevard to Blair, where Kobren taught and coached until the day he died on Aug. 9, 1996 at age 65.
One word that nearly everyone who knew Kobren uses to describe the late Blazer is dedication. "He was very dedicated to Blair High School. If I had to say something about him, it would be that," says math teacher Milton Roth. Roth came in contact with the physical education kahuna through their shared passion for officiating basketball games. "I first knew him from this; I would get calls from him any day, at all hours of the day, asking for me to ref," says Roth. As commissioner of basketball referees in the region, Kobren was responsible for many games, ranging from junior high school to small-college league competition, relying on his friend Roth to help him.

Kobren was a major advocate for the athletic department, and was often found trying to raise funds for sports teams in all possible manners and fashions. "He was always looking for a way to raise money for the athletic department," says Roth. "He personally attended to and maintained the soda machines – not because he had to, but because their sales would profit Blair teams."

Varsity baseball coach John MacDonald, who shared time at Blair with Kobren, recalls this quirky trait fondly, saying that "…it wouldn't be unusual to see Mr. Kobren with both pockets full of quarters so heavy that his coach's shorts would sag." Kobren also inspired all teams to sell ads to local stores and raise money in creative ways to benefit the athletic department. 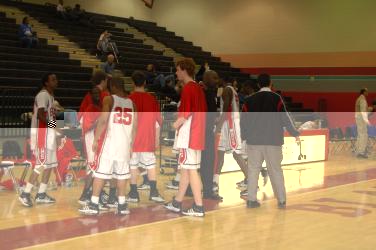 Photo: A picture of Kobren watches over every basketball victory and loss at home on a memorial placard that resides on the scoring table.

Photo: A picture of Kobren watches over every basketball victory and loss at home on a memorial placard that resides on the scoring table.

For all of his passion and obsession about Blair athletics, Kobren's friends and co-workers describe him as a reticent and humble fellow. "He was reserved mostly, a quiet kinda guy. If you got close to him you'd see another side," says Roth through a smile. "I got to see a side of him that was a little more outgoing." While many were deprived of Kobren's gregarious side, a fellow teacher of his, Dale Miller, was fortunate enough to experience Kobren's truest potential, and went on to assume the position of athletic director.

After Kobren passed away in 1996, he was succeeded as athletic director by Miller, who still holds the position. Miller knew Kobren through his work at Blair and expresses Kobren's devotion to Blair with pride. "He had two interests in his life: one was his grandchildren, the other was Blair High School," explains Miller. The pair became fast friends through their shared passion of athletics. Miller attributes his multifaceted sports knowledge to his predecessor; Kobren served in all the athletic capacities he could, from director and fundraiser to teacher and coach.

When Kobren began feeling ill in 1995, he refused to allow himself to crumble despite the gravity his symptoms seemed to reveal. "He wouldn't go see the doctor about his heart because he had to work," says Miller. After finally visiting his doctor, it turned out that Kobren had a non-functioning valve on his heart and needed bypass surgery. "He waited for the day school got out to go get his surgery, not a moment sooner," says Miller.

Kobren battled his declining health with a resilient spirit, refusing to let an ailment take control of his life. "At the medical facility at Johns Hopkins, they used to call him 'Special-K' because he was always cheery and raring to go," Miller chuckles sadly.

In early August Kobren returned to his home in Silver Spring after undergoing a heart transplant. On Aug. 9, 1996, Kobren went out for what would be his last athletic endeavor - a swim in his pool. "It was two days before anybody found him," Miller says. Kobren had suffered from a heart attack while swimming and drowned.

Miller still reflects on his apprenticeship under Kobren. "The interesting thing is, I'm older now than he was when he died, it's a sad thing," Miller says, while fighting back emotion. "He was a stellar athlete and human being."

Many recollect Kobren's athletic ability with fond memory. "Nobody could beat him at badminton, it wasn't any fun playing him because you'd never score any points," Miller gently grins. Meanwhile, MacDonald reminisces about Kobren's shared passion for badminton with his students. He organized his class into "four different 'countries' [which] played each other everyday in badminton," says MacDonald. Kobren served as both a teacher and mentor for MacDonald, who accredits his position as varsity baseball coach and his teaching career to Kobren.

Miller feels this is a justified memorial because "if someone were involved in athletics at all they would know Kobren." Following the gym commemoration, there was a ceremony honoring the stalwart athletic director at the first basketball home game. "It was very touching…there were family members and people involved in athletics throughout the county in attendance," says MacDonald.

While Kobren arrived during the golden age of Blair sports, he stuck by the Blazers through the next 20 years with perseverance during state championship droughts and few inspiring seasons. To Kobren, it was not about winning or losing, it was about building an athletic program, says Roth. MacDonald agrees. "I think that Mr. Kobren stood for a few things that you don't see much any more. The biggest thing…[was] his loyalty to Blair."