The team's success in recent competitions stems from their work ethic

The buzz sounds and Blair has the opportunity to answer the question. That is the fun of an "It's Academic" competition, full of knowledge, teamwork, perseverance and quick reactions. Montgomery Blair High School's "It's Academic" team has been having an impressive winning streak this season. Led by Coach James Schafer, the team looked impressive in a big win against Paint Branch High School and Robert E. Lee High School which was recorded in NBC studios. The Blazers almost tripled the second place school in the blowout. The game aired on Dec. 14 at 11 a.m. on the "NBC4" TV network. 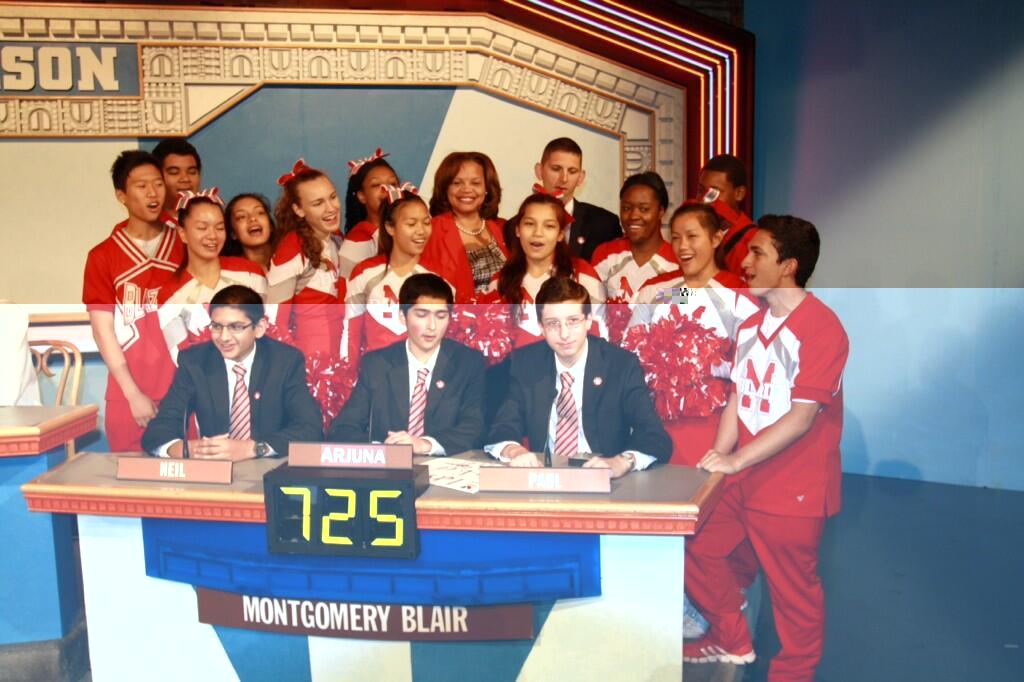 Photo: Montgomery Blair High School's "It's Academic" team's win aired on Saturday was their opening round match and now the Blazers have made it to the quarterfinals of the television tournament.

Photo: Montgomery Blair High School's "It's Academic" team's win aired on Saturday was their opening round match and now the Blazers have made it to the quarterfinals of the television tournament.

Senior team leaders Paul Ellis and Neil Dalal both enjoy being a part of the "It's Academic" team. "I love getting to meet kids from other schools," Ellis said, "It allows you to get the bigger picture of what you learn in school." Ellis has been a part of the team since he was a freshman at Blair and according to him, he was in after school help one day and just decided to participate in the team's practice going on next to him. "In physics help as a freshman I saw them practicing and I just joined in," Ellis said.

The "It's Academic" team was relentless in its win. Dalal attributes the win to the team's work ethic. "Our work ethic has been great, it's lead us most of the way," Dalal said.

Ellis agrees that work ethic played a big role in the Blazers win on Saturday, "We've been practicing for years at this point," Ellis said. That practicing has obviously been helping the Blazers in competitions. Their teamwork, perseverance and general knowledge launched them to win the game by so many points.

The team also had great support from fans in the NBC studio. Ellis appreciated the fans and used their presence as an advantage in the game. "We played well, we did not let up and we really drew on our support from the crowd," Ellis said.

"As a team, we are working very hard this year," Schafer said. This work ethic consists of practices on Tuesdays and Thursdays in Coach Schafer's classroom. Ellis describes these practices as replicating competitions to better prepare the team for upcoming bouts. "In Mr. Schafer's room, we simulate a competition by asking sample questions and we get better by researching those we get wrong," Ellis said.

The team participates in competitions all over the state of Maryland and sometimes in Northern Virginia. The way these competitions work varies. However, it usually consists of questions being asked to the teams who are competing and a representative from a team will buzz in and answer the question. "Kind of like [the TV game-show] Jeopardy," Schafer puts it.

Dalal has different reasons for loving and joining the "It's Academic" team. According to Dalal, he enjoys competing in the various events the team participates in through the year. "Being able to compete at competitions about all subjects is great" Dalal said, "As a team we have always been competitive at Blair." For Dalal, the tradition of "It's Academic" runs in the family so for him, beginning to participate in team activities at Blair was an easy decision. "My uncle and sister did 'It's Ac' in high school," Dalal said, "Also, the coach [Schafer] was my teacher so I decided to join."

Montgomery Blair High School's "It's Academic" team's win aired on Saturday was their opening round match and now the Blazers have made it to the quarterfinals of the television tournament. Their following match, according to Schafer, will not be aired on TV for several months.