Blair's practice fields are large, strangely shaped patches of dirt surrounded by weed-filled grass. Rocks are in almost all of the dirt patches, making the fields seem like a gravel road. When there is a dry stretch, dust is commonly kicked up as players run through. When it rains, large puddles form in the dirt patches and do not disappear quickly, leaving dozens of streams of water trying to rush off the field with nowhere to go. It would be a stretch to call these pieces of land fields, but most of the Blair sports teams have to use them at some point for their daily practices. But when Blair first moved to its current Four Corners location, the practice fields were highly coveted and for a time were even nicer than the grass that used to cover the stadium field.

Fixing the practice fields would not be cheap, but the practice field is becoming more dangerous and is a hazard to the players who practice there. While no games are played there, it is still an important place for all the teams who use it nearly every day. With Blair sports teams becoming better and better each year, these athletes deserve a safer field that will be better to practice on and help hone their skills.

At the turn of the century, Blair High School moved from near Sligo Creek to its current location. When the new campus opened, MCPS approved the construction of the fields behind the school. But the company hired over the summer had not finished the job in time for school to start. The practice fields were not appropriate for sport practices. Blair teams often practiced off-campus at nearby Pinecrest Elementary in the Woodmoor neighborhood.

To improve the quality of the fields, the county decided to experiment and give Blair practice fields with Bermuda grass, a short cut grass like that on a golf course, and an irrigation system to uphold them. Robert Gibb, history teacher and coach of the varsity girls' soccer team, has seen the positive change happen to the field that year. "It was like playing soccer on a putting green," Gibb says while recalling the Bermuda grass practice field behind the school. 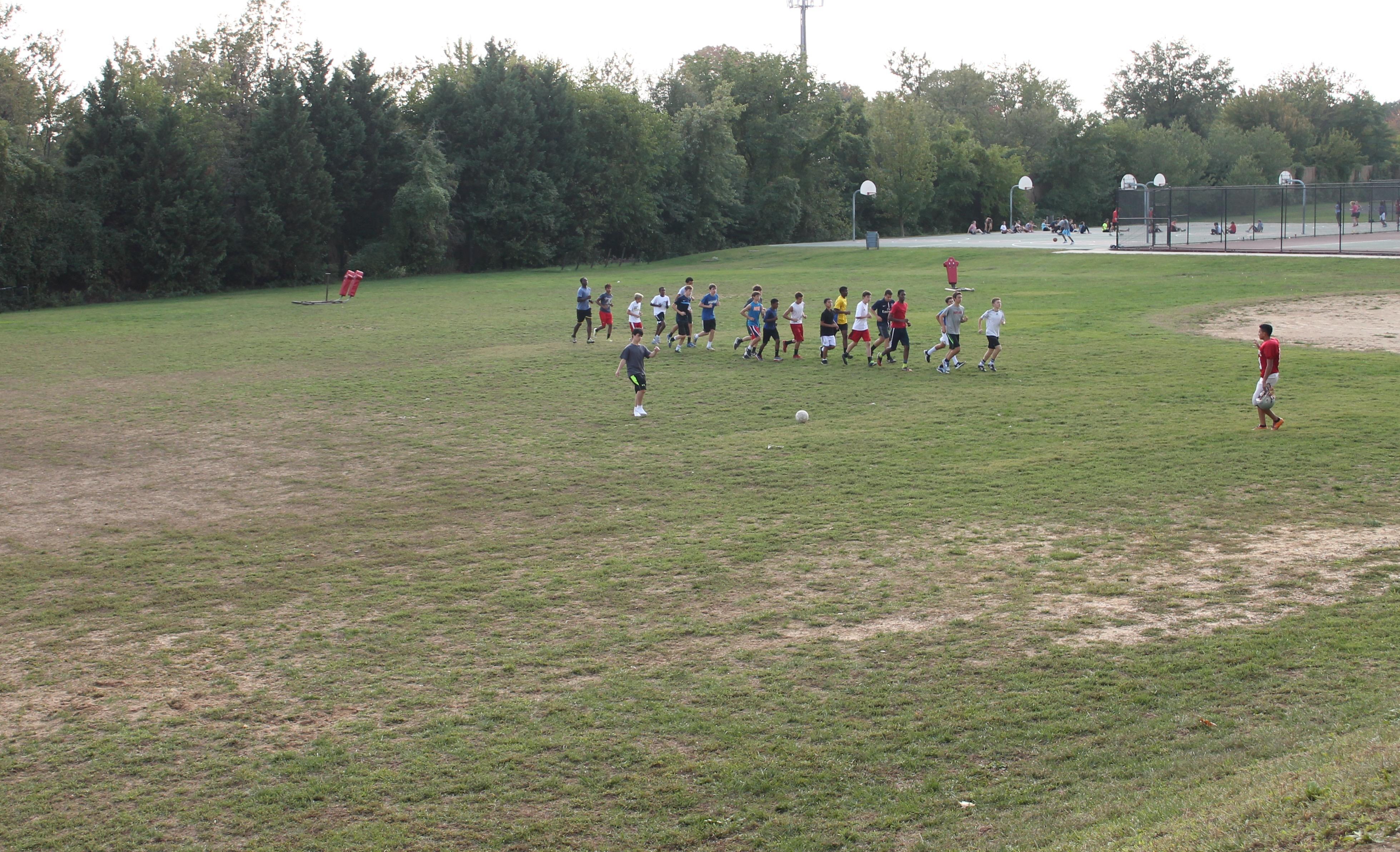 Photo: The barren practice field behind the school makes practices more difficult for the soccer teams.

The barren practice field behind the school makes practices more difficult for the soccer teams.  Photo courtesy of Hannah Rapp.

While the school received a brand new turf stadium, problems soon overtook the experimental irrigation system that was installed by the county. The system leaked, broke, stopped working and eventually went out of use. The county shut down the watering system, and so began the loss of grass. Kids were running around at lunch and every day after school in the fall and spring, trampling the formerly nice lawn. The winters and summers were not long enough for the grass to grow back and the dirt patches and rocks were exposed from beneath.

The cost of fixing those fields will be high, but the safety of the Blair players is more important. Irrigation and drainage will make for a smooth, grassy field that will be easier to play on and will allow coaches to work on whichever skills they think need work on that day. Having one large dirt desert behind the school just doesn't look very nice, so having a green, low-cut meadow will be a pleasant change of scenery for the back of the school.

The outdoor sports coaches understand the problems with using the practice field better than almost anyone. When no team has a game, there are often four or more teams using the practice field at once. Although most teams are happy to practice wherever they can, the field is viewed as a place where practicing is made more difficult. If the investment for a field is put in, the final product would go a long way for these teams. Each of the three fields would be available for use at the same time, allowing for multiple games to be held at the same time. The inconveniences of scheduling at least eight teams to play on the same field are huge, and providing multiple game-ready fields will give teams time to practice right after school, and play their games at dusk. Beautification around the fields, such as flowers and other plants will make for much nicer scenery, and surrounding fences will add to the quality of the field.

The girls' soccer team often has to practice on the uneven field. "The ball is on the ground often, and the bumpy field makes the bounces unpredictable, it's almost completely useless for skills like passing," Gibb says. Instead, he will drill his players in air-oriented drills or fitness, activities that are unaffected by the surface of the field. Any ball hitting the ground bounces every which way, and moving around is more challenging by the small patches of grass. "The ground balls are hard to field and running is harder," said Noah Buchholz, a senior on the baseball team. "We still practice there, but it's just much less effective." Buchholz has the last part right: the teams have nowhere else to improve their skills.

The teams practicing on the field now are not benefiting enough from playing there. Improving the field will make practicing much easier for those teams, and will be less hazardous than the current situation. Putting in the money now will turn into a great investment for not only the sports teams, but the beautification of the school for years to come.