Blair’s sports sponsors: How are sports at Blair funded?

Every year, tens of thousands of dollars are funneled into Blair's 45 athletics teams, but how does it work exactly?

High school sports serve several important purposes at Blair ‒ they promote student-athlete physical and mental well-being, encourage academic achievement, create school culture and can be a channel into secondary education for many students. But how these invaluable and often expensive programs - all 45 of them - are funded is not common knowledge for most students and teachers at Blair.

Through research and interviews with Rita Boulé, Blair's athletic director, Barbara Efantis, the chair of the Montgomery Blair Athletics Association, student-athletes and coaches, here is a simple explanation of the two ways public high schools in Montgomery County and Blair are funded - booster clubs and from MCPS.

In 2019, MCPS allocated Blair $59,000 for athletics. Boulé says that this number is perennially changing, based on how much the county decides each of the middle and high school needs. The money is then divided among Blair teams based on need. For example, if a team has more away games than home games, transportation costs will go up. And every four years each team gets new uniforms, so this also adds to the price.

MCPS identifies four categories of Booster Clubs, including Athletic Boosters, which are organizations that fundraise for an individual sport or a school's sports as a whole. Blair’s Athletic Booster, The Montgomery Blair Athletics Association (MBAA; widely known as the 'Blair Boosters' or just the 'Boosters'), fundraises for the entire Blair athletic program. It mostly helps teams purchase things that are not included in the MCPS budget. 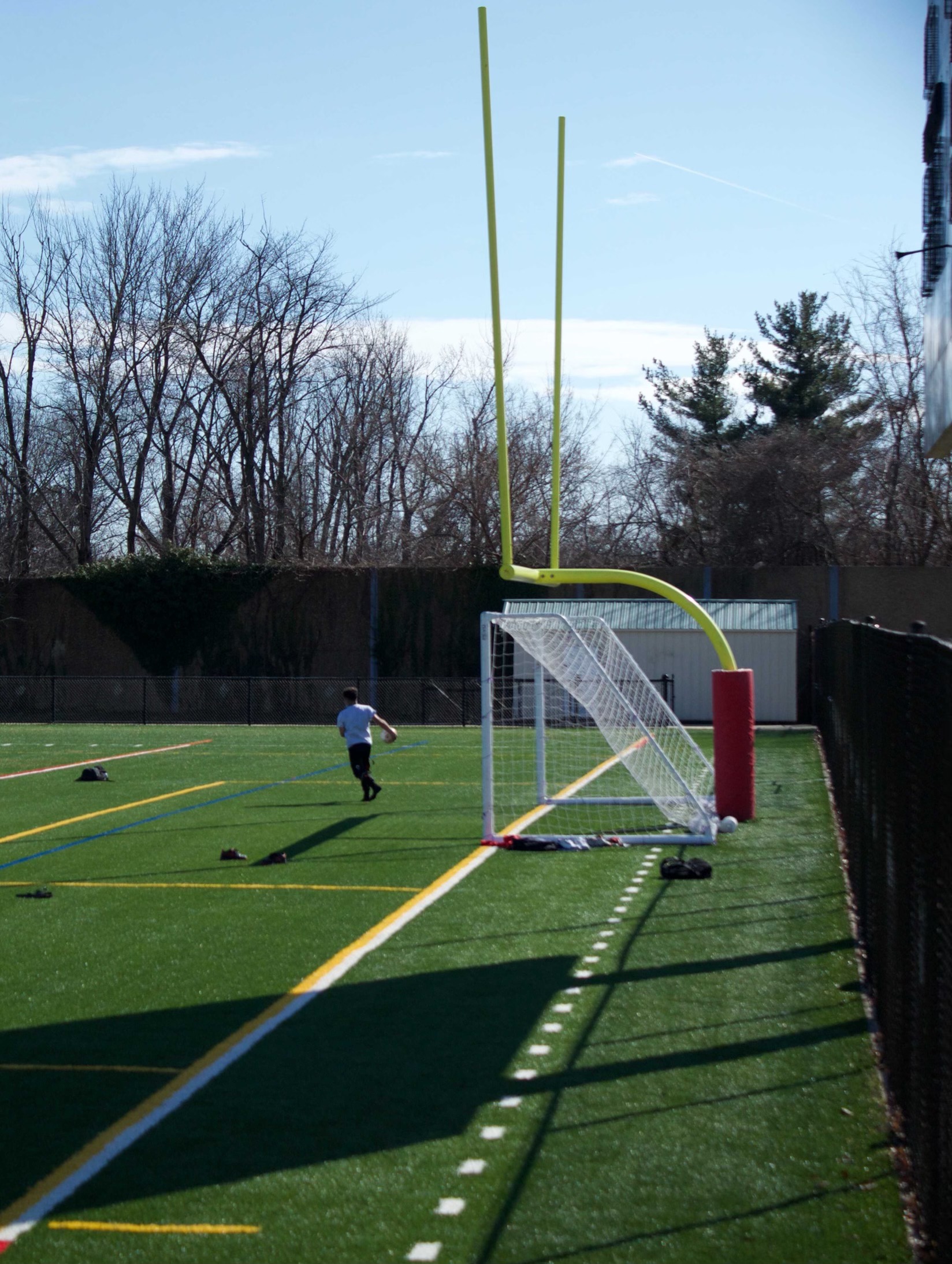 Blair’s sports sponsors: How are sports at Blair funded?

Photo: How are Blair sports supported?

Boulé says many of the organization’s purchases have more wide-reaching benefits than purchases from the allotted budget from MCPS. "Boosters largely supports athletics here at Blair with the bigger items that will go across multiple sports… They support the awards night for varsity teams, the trophy cases, and they buy banners. So things that impact the athletics program as a whole is really where a lot of the money comes from Boosters," she says.

If Blair Athletics wants to make a purchase that was not planned for – say, an ice machine. Blair would purchase it. After the purchase, the Boosters could compensate Blair Athletics in the form of a donation to cover the machine’s costs.

Barbara Efantis, the president of the Blair Boosters outlines the way a team or program would request donations. For example, say the soccer teams want two new $3000 goals.

"What would happen then is… the students, at least one parent, and at least one coach attend a booster meeting [over Zoom], and make a presentation. They tell us what they want, why they want it, and why the team would benefit from it. And they tell us how much it will cost and how much they need from the Boosters. Then we vote on it right then and there," she says. She adds that during her time as President, the Boosters have not refused any requests from a Blair sports team.

Though Booster Clubs are independent organizations from MCPS and its schools, The MBAA states that it works "in conjunction with the Athletic Director, school administration, and teams [and] coaches in order to support Blair Athletics."

The MBAA is not completely autonomous, as MCPS publishes guidelines for Booster Clubs. For example, Athletic Boosters cannot compensate coaches to supplement the stipend they receive from the county. They are also prohibited from providing funding to private club teams which would include ultimate frisbee, ice hockey, and crew teams that bear Blair's name but are not affiliated with or funded by the school or MCPS.

Blair Boosters does not receive the profits gathered from ticket sales or concessions. The only cash it receives is from membership costs and fundraisers.

Though Booster Clubs seem like positive influences to schools overall, they have recently come under scrutiny for contributing to the education gap across the county. The school community staffs and funds its booster clubs. This means that schools with wealthier student bodies, which often have a significantly higher white population, will have wealthier Booster Clubs. This translates to better-funded extracurriculars, athletics and even classes. This difference in funding adds on another layer to the education gap.

Boulé acknowledges this disparity, but assures that all programs are equitably funded at Blair. "Booster Clubs have to operate equitably amongst all the programs in their school. But do different Booster Clubs make different amounts of money? Absolutely. We also get some feedback about what other schools' athletic programs have received from their Booster Clubs and how much it definitely differs across MCPS," she says.

Boulé and Efantis emphasize that the goal of the athletics department and Boosters budget is to meet each sport's needs (and wants if possible).

Sophomore Loic Nemlin Koffi, who plays varsity football and JV boys’ lacrosse, believes that the school meets both teams' needs. "During football season, I remember we did this fundraiser where we would go out, raise some money, donate it to the school, and then we would get equipment really fast. And for lacrosse, it's my first time playing, and I remember as soon as I walked in there, they gave me my pads, my helmet on my second or third day. We have enough money to really provide for everyone," he says.

Sophomore Riley Fasteau, who plays JV softball, believes her sport's needs are largely satisfied, with a few exceptions. "Our needs are usually taken care of. There are some girls on my team that have baseball pants, so that's not ideal, but it is what it is. But overall, we have enough balls, we have enough bats, and the girls that don't have equipment are able to get it pretty easily," she says.

However, not everyone feels this way. Freshman Grady Littlejohn, who plays co-ed volleyball, says there is room for improvement. "Our needs are met for the most part. A lot of our equipment is kind of old, but I feel like [co-ed volleyball] gets enough attention, but it could be better… stuff is just kind of worn-down," he says.

Why funding is important

With the support of the county and Blair Boosters, Blair is able to provide its athletes the opportunity to shine. The Blair athletics program brings our school together, and keeps our school spirit alive. Something any student can and should do to support the program is attend games and cheer our fellow Blazers on.