Although no scores or results were officially tabulated at the Montgomery County Developmental track meet Dec. 13 at the PG Sportsplex, some of the Blazers' individual and team performances rank them at the top of county competition. The event served as notice that Blair could be competing for some top awards come the end of the season. 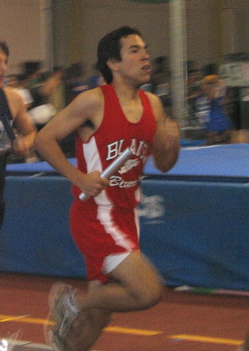 The boys started the meet off right with some very impressive times. The 'B' team won its heat and the boys' 4x200 relay 'A' team and 'C' team placed 2nd in their respective heats. Senior Victor Mba-Jones started the 'A'-team off with a quick 24.57 leg before handing off the baton to freshman Jeremy Tousley, who brought the team up to 4th place in a field of 8 teams with a split of 25.78. Sophomore Jonathon Haughton ran a strong third leg, passing a team in the first curve to move into 2nd place with a 23.20. Junior captain Louis Varella clinched 2nd place for the team by running an anchor leg of 23.85, bringing the A team's total elapsed time to 1:37.40. The same time would have given the Blazers sixth place in the Montgomery County Championship this past January.

The boys' 4x200 relay success at the county level was a reaffirmation of the boys' sprint team's success at the HoCo MoCo Challenge last Saturday, Dec. 9, at the PG Sportsplex. At that meet, the boys' 55m shuttle relay, 4x200m relay and 1000m sprint medley (100m, 200m, 300m, 400m) all placed third overall in times of 26.66 seconds, 1:37.41 and 2:09.28 respectively. Though they placed third, the Blazers were actually second out of Montgomery County schools because Hammond High School from Howard County took first place in each. The girls' 4x1600 meter relay team turned in another standout performance at the HoCo MoCo Challenge,finishing 2nd overall with a time of 22:41.75.

In their latest meet, the girls' team was anchored by a strong 4x800m relay performance, which featured Ashlyn and Halsey Sinclair. The Sinclair's ran split times of 2:23 and 2:24 respectively, and paced the girls' team to a third place finish in 10:13.65. 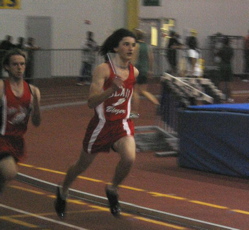 Photo: Freshman Jeremy Tousley flies down the straightaway in the second leg of the 4x200 meter relay at the Montgomery County Developmental meet on Dec. 13.

Photo: Freshman Jeremy Tousley flies down the straightaway in the second leg of the 4x200 meter relay at the Montgomery County Developmental meet on Dec. 13.

First-year head coach Mike Fleming was pleased with the meet's results and predicted that the team would continue to improve. "I think the results were good. There is a good combination of distance and sprinters. I'm optimistic, we're off to a good start," Fleming said.

Since the meet was a developmental meet and not a scored meet, an unlimited number of athletes were allowed to compete. To speed up the meet, more athletes competed per race than usually allotted, with some races fielding over 40 runners. The overcrowding caused runners to be boxed in, stuck in the inside lane surrounded by slower runners without a way to run around them.

Senior Paul Ishimoto's open 500 meter dash at the Montgomery County Developmental meet fielded around 14 runners, about double the number of runners usually in the race. He got boxed in behind slow runners for the first 300 meters and was unable to pass them until the last 100 meters, when he was forced to run in the third lane to do so. It is preferable for runners to run in the first lane during longer races because they end up running a shorter distance and extolling less energy. "When the race started, you had to fight to get in good position so you didn't get boxed in," Ishimoto said. "I didn't have a very good start, so I ended up getting boxed in behind people I normally would've been able to beat." Ishimoto's third lane run to the finish landed him 3rd place in 1:15.58, a time he believes he could have bettered by 2 to 3 seconds to garner second place if he had not been held back at the start.

Due to the large number of athletes, the meet ran into overtime before it was cut off at 9:15 pm after all the 4x200 relays were completed. The open 800 meter race and the 4x400 relay were canceled

The Blazers' next meet is the second Montgomery County Developmental meet on Wed., Dec. 27, from 11 am to 5:30 pm at the PG Sportsplex.