The Montgomery Blair Blazers (4-2) used the passing game on offense and forced turnovers on defense to beat the Springbrook Blue Devils (4-2) by a score of 38-20 after the game was delayed nearly two hours due to lightning Friday night.

After pouring down rain prior to the game, both teams were forced to deal with the wet and slippery field. Turnovers and injuries were common throughout the game. Both teams started slowly, but Blair on the first play of Blair's second drive, junior quarterback Desmond Colby lobbed a ball over the defense to junior Clifford Carter, who ran into the end zone for the first points of the game. The game was filled with big plays for the Blazers, as Colby exploited the opposing secondary. "The offensive line played great, the receivers ran good routes, but it was really just preparation, everyone knew exactly where to go, we knew what Springbrook was doing and we executed on it," Colby said.

Springbrook confused Blair's defense in the first quarter with a lot of motion and fake handoffs in the backfield. They scored and converted the two-point conversion to take the lead 8-7. On the Blue Devils' next offensive possession, the Blazers defense solved the riddle and forced a fumble. Blair took the lead on a field goal and never looked back. 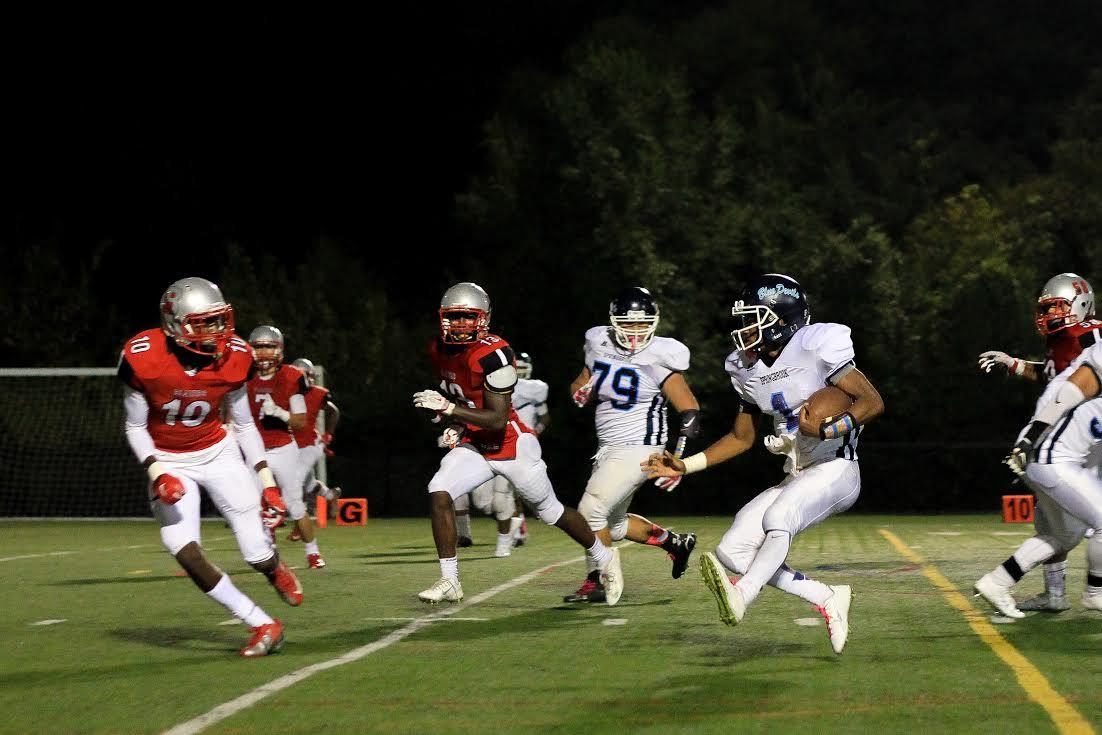 Photo: Chris Green (10) and the Blazers forced six turnovers against the Blue Devils.

Photo: Chris Green (10) and the Blazers forced six turnovers against the Blue Devils.

Senior Lytton Xu changed the game on one play. After the Springbrook quarterback threw his pass, Xu jumped in front and snatched the ball right before it could reach the wide receiver, and ran the ball back 40 yards into the end zone behind some good blocks by teammates "I knew the running back was out and they were most likely going to pass, so I saw the number two receiver going in, and then got my eyes to the number one and I just cut in front of it," Xu said, "I just want to thank Chris for the block, and I felt like that was momentum changing for the offense as well."

Blair forced turnovers on four consecutive Springbrook drives from the end of the first quarter until halftime. The Blazers totaled six turnovers during the game. "We practice turnovers all the time, we preach it. We haven't lost a turnover battle yet," head coach Andrew Fields said.

After halftime the Blazers' offense marched down the field and scored on a ten yard pass from Colby to wide receiver Chris Green in the corner of the end zone. He outleapt the Springbrook cornerback and pulled the ball down for the score. "It was just me and ball, I wasn't thinking about nobody else, and I already knew the defender couldn't stop me," Green said. He dominated in the second half on both sides of the ball.

On the next Blair possession Colby this time found junior Eric Zokouri on a short pass, and he avoided a couple Springbrook tacklers and ran 60 yards for the score. But the Blue Devils responded with a deep touchdown pass. The Blazers stout defensive line this time prevented the two-point conversion.

The second interception was a key play by Green deep in Blair territory, and the pick stopped another potential Springbrook score. Green went out of bounds on his own one yard line. With the Blazers backed up near their own end zone, Colby received the snap and quickly lobbed a ball near the right sideline, hitting Green in stride for a 99 yard touchdown, which sealed the deal for the Blazers, who finished with 38 points after scoring just seven last week against Paint Branch. "The fast pace offense helped us today, most of their players were going both ways, so we just wore them out, got them tired," Green said.

When the fourth quarter ended, the Blazers had won handily, 38-20, and after the postgame huddle, Coach Fields circled his players up as they took turns dancing in the middle. "The kids play football to have fun, so we as a coaching staff try to make sure it's always fun. Obviously there's always work to be done, but we try to round out the edges and make it a little easier for the kids," Fields said.

Blair takes on the undefeated Sherwood Warriors, who walloped Northwood 56-6 Friday night, next week to play for a playoff spot in the tough 4A East division.