The name says it all

The SGR Spectacular, featuring over 20 different original Blair acts ranging from Step team and Middle Eastern dancers to Kiltics and fashion club, took place in the SAC on Friday, Nov 16. The event, which began around 6:50, aimed to raise money for the Invisible Children's Fund (ICF), which helps Ugandan children who are abducted by the nation's resistance army. 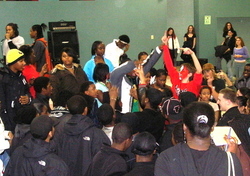 Photo: New Era, a local Blair go-go band, livens the crowd at the SGR Spectacular. Click on the photo for a gallery.

Photo: New Era, a local Blair go-go band, livens the crowd at the SGR Spectacular. Click on the photo for a gallery. Photo courtesy of Ariana McLean.

The Blazer band SCOS gave a brief intro to the show with some heavy riffs and haunting vocals. As the spectators started to file in, on came the MCs: juniors Terence McPherson and Jason Meer. The hum of chatter bounced around the SAC as the first act, Terapanth, opened with the sound of smooth brass and funky bass.

The SGR event, organized by Blair juniors Adam Yalowitz, Avi Edelman and Saron Yitbarek and sponsored by social studies teacher George Vlasits, collected donations for the ICF at the door while the crowd poured in. People milled about booths set up with artwork, t-shirts and snacks while the step team and InToneNation provided a backdrop of sharp rhythms and sweet tunes.

Next up, senior Miguel Pena hit the crowd with some hot reggaeton beats. Following that, a kilt-sporting senior John Musgrave sang a heartfelt melody in protest of the war and support of American troops overseas.

Following soon after, The Great Kazoo Band hummed and buzzed their version of Queen's "Bohemian Rhapsody."

After that funny and entertaining performance, the DIVA dancers and the break dancing club provided a hip-hop infusion that drove the crowd wild. 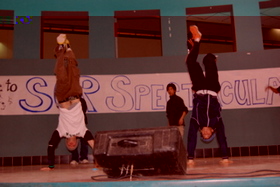 Photo: Seniors Greg Donaldson and Josh Gist (from left to right) breakdance at the SGR Spectacular.

The spinning and dancing was followed by the fashion club's strutting as they worked their new designer lines all over the SAC. The Caribbean Club ended the first set and led into the intermission with a bang.

While the intermission was a break from the onstage action, the competition heated up offstage as Blazers arm-wrestled for a chance to face Vlasits for the championship. Vlasits defended his title handily, crushing his opponent in under a minute.

The second half of the SGR Spectacular was all music, starting off with Drivel. Their steady rock and wailing vocals reverberated through the crowd, which completely filled the first and second tiers of the SAC.

Break the Balance and Outsource finished off the hardcore rock section, along with an appearance by guest vocalist junior Nic Lukehart. The final act, a go-go band named New Era, got the crowd on their feet as they wound down the final minutes of the show.

SGR raised $1600 from donations given by a crowd estimated at 500 people. After the group pays for security at the event, they hope to donate $1200-$1300 to the ICF. Event coordinator Yalowitz said that this year's Spectacular "was the best in its seven years of existence." Edelman called the event "A great success. We had one of the most diverse crowds and one of the largest crowds in years."

After New Era played their last note, the crowd began to file out with a sense of satisfaction after a long night of partying and a sense of hope for the devastated children of Uganda.

Click here for a photo gallery of the SGR Spectacular.