From July 29 to Aug. 4, senior Samuel Zbarsky and 11 other North American students went to the International Linguistics Olympiad (IOL) in Ljubljana, Slovenia, to compete with over 30 teams from 26 countries around the world. Over the course of six days, the American and Canadian teams competed in both the individual and team events, as well as did some sightseeing around the city. 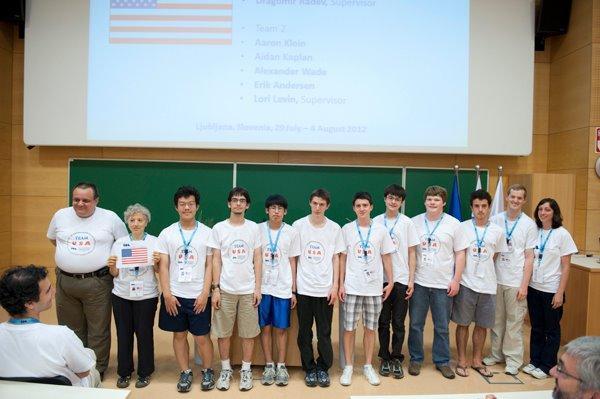 Photo: Above, the members of the two USA teams gather for a group picture. Zbarsky is sixth in the line.

Above, the members of the two USA teams gather for a group picture. Zbarsky is sixth in the line. Photo courtesy of International Linguistics Olympiad.

At the competition, the two U.S. teams won a total of six medals (two golds, three silvers and one bronze) in the individual events as well as the first place team contest trophy for the fifth year in a row. Zbarsky won an honorable mention for the individual contest, which was a six-hour test that was about the following languages: Dyirbal, Umbu-Ungu, Basque, Teop and Rotuman. In total, the jury awarded 37 medals, 24 honorable mentions, four team trophies and 10 other prizes, according to its website.

To qualify for the Olympiad, students must either place through their performance in a national competition, as Zbarsky did, or their respective country must approve them. "I was one of the top four scorers on the [North American Computational Linguistics Olympiad]. The other U.S. team was picked from the next 10 or so scores through playoffs," Zbarsky explained.

According to the IOL, the event was not only about the competition, but about developing relationships between students from different countries. The schedule of the competition was laid out over the course of six days, so the contestants had time between the contests to relax. "Traveling to Slovenia, seeing some friends and meeting lots of new people, doing the individual and team contests [and] sightseeing," Zbarsky said, listing some of the activities he participated in.

The IOL was founded in 2003, though the history of linguistic Olympiads for secondary schools date back to 1965, according to the IOL rule book. The first Olympiads were held in Moscow in 1965 by the late Alfred Zhurinsky, a fifth-year linguistics student who would later become a renowned philologist.

The purpose of the modern IOL is to promote the awareness of language and foster adolescents' skills in languages. The concept was born from the realization that there were many similar competitions worldwide that could be merged into a single larger event. This international cooperation allowed for the IOL to be more successful than the other smaller events.

The IOL is one of the newer Olympiads out of the 12 International Science Olympiads. In recent years, the contest has expanded dramatically, jumping from only six countries and 33 participants in 2003 to 26 countries and 131 participants in 2012. Much of the interest in IOL stems from a curiosity in math logic and puzzles, though not necessarily an interest in linguistics itself. "I always found cool stuff about languages interesting when I heard it, but never really studied linguistics," Zbarsky said. Although Zbarsky wasn't sure about his expectations for the event, as it was his first, he won an honorable mention in the competition and was able to sightsee and meet new people in Slovenia.