The Jeopardy! Teen Tournament features 15 high school contestants between the ages of 15 and 18 in a two week event. Every weekday night from June 17-28, a Teen Jeopardy! episode is broadcast on television. Five quarterfinal games, each between three contestants, take place during the first week. The winners from these games, combined with the next four highest scorers, compete in the semifinals. The three winners from the semifinals participate in two final games, with their cumulative score determining the champion and winner of $100,000. 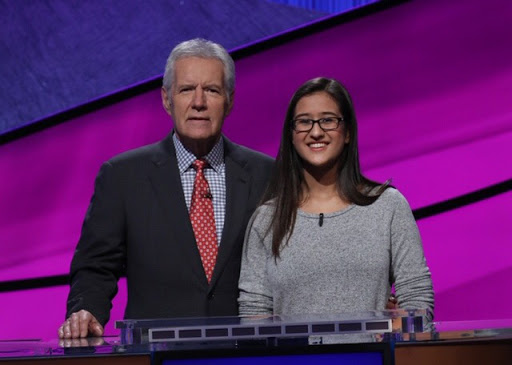 Weng's experience with trivia competitions extends far past Jeopardy!. She competes with Blair for a local trivia game show, It's Academic. She is also a member of Blair's competitive trivia teams, including Quizbowl, Science Bowl, History Bowl, Ocean Science Bowl and Envirothon. According to Weng, Teen Jeopardy! was just another day in her life. "It was kind of business as usual, because I do so much studying for Quizbowl and History Bowl and all my other competitions," she said.

All of the practicing paid off as Weng showed up and competed as if the game show was any other trivia competition. The first round consisted of categories "Computer Connections," "Kings & Queens," "Hodgepodge," "Book Chapters," "5-Syllable Words" and "The D.C. Universe." Weng initially dropped into the negatives by answering clues incorrectly but soon recovered. She held second place by the end of the round with $4,400, while Bolsen and Kataria had $8,000 and $3,400 respectively.

After the first commercial break, Trebek spoke with each of the contestants. Weng introduced Magnet Arts Night, the Blair Magnet's annual student-run talent show, to the audience members. "[CAP students], once upon a time, believed that math students couldn't do art, and they couldn't act, and they couldn't perform, so we decided to show them wrong," she said.

The next round, Double Jeopardy!, had categories "Extracurricular," "Animals," "Music I'm not Familiar With," "Big Rivers," "Crossword Clues 'N'" and "The D.C. Universe." Bolsen pulled ahead by successfully completing three Daily Doubles. At the end of the second round, Weng was again in last place with $6,800, while Bolsen held $25,300 and Kataria held $11,400.

The Final Jeopardy! round consisted of a single clue from the "Ancient Literature" category: "If you were using an alternate name, the title of this work could be translated as 'Troy Story.'" Bolsen and Weng correctly answered the clue with "The Iliad," while Kataria failed to respond. Bolsen ended in first place with $25,342, Weng in second with $13,600 and Kataria in third with $0.

Although Weng is out of the running for 2019, the rest of the Jeopardy! Teen Tournament will play on WJLA-TV, weekdays at 7:30 p.m. and ending on June 28.