Blair senior Adam Hallberlin was involved in a car accident on Sligo Creek Parkway just before midnight on Friday, according to a letter written by his step-father, Joel Kanter. Hallberlin is currently in the National Rehabilitation Hospital in D.C. 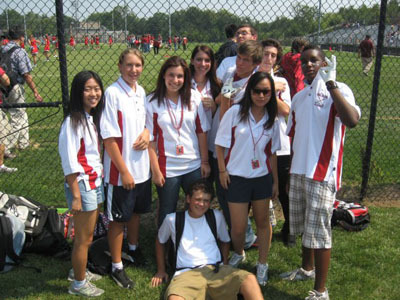 According to Kanter, Hallberlin was driving on Sligo Creek Parkway between Piney Branch Road and Maple Avenue when his car collided with a fire hydrant and his head hit the windshield, causing injuries to his skull and brain. He was not wearing a seat belt, but the two passengers with him, one of whom was a Blair student, were and suffered no serious injuries. Efforts to reach the Montgomery County Police Department (MCPD) for further information were redirected to the Montgomery County Department of Parks, which refused to provide the accident report for the collision.

Hallberlin went into surgery around 3:30 a.m on Saturday in order to minimize secondary trauma to his brain by reducing pressure and removing bone fragments. According to Kanter, the attending neurosurgeon was Dr. Rocco Armonda, M.D. Armonda is currently the Director of Cerebrovascular Surgery and Interventional Neuroradiology of the National Capital Consortium at Walter Reed Army Medical Center, and a staff neurosurgeon/interventional neuroradiologist at the National Naval Medical Center

According to his family, Hallberlin has showed positive signs of recovery, including conversing coherently and walking. Hallberlin was transferred to the National Rehabilitation Hospital today after spending one week at the Washington Hospital Center. His rehabilitation, both in the hospital and at home, will likely take a number of months.

Currently, only immediate family is permitted to visit Hallberlin, though his family encourages friends and classmates to keep Adam in their thoughts and prayers.

Silver Chips Online is still compiling information, and will post updates as they occur.
Editor's note: This story was updated at 6:10 p.m. on Sept. 14.