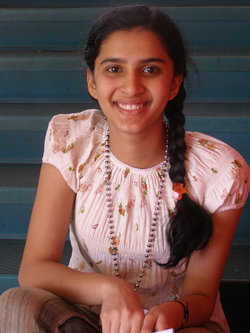 Photo: Junior Maureen Raj was a finalist in the Washington, D.C. area Shakespeare Speech competition with a performance from "Macbeth" and a Shakespearean sonnet.

Photo: Junior Maureen Raj was a finalist in the Washington, D.C. area Shakespeare Speech competition with a performance from "Macbeth" and a Shakespearean sonnet.

The D.C. area competition consisted of two rounds, according to O'Connor. The first round, which took place in the morning, eliminated 30 of the students, leaving the final top ten. Raj, who made the top ten, then went on to perform the sleepwalking scene from "Macbeth" as well as a Shakespearean sonnet that evening.

Although Raj did not win the D.C. competition and advance to the national level, O'Connor was pleased with the performance. "I thought she did extremely well," she said. "People were very complimentary of after she performed. She clearly impressed everyone."

O'Connor added that such competitions do not mean that winners' performances were superior. "It's very challenging to access objectively an arts competition," she said. "Getting the prize is not the end all be all."

Raj, who has only lived in the U.S. for a year, competed against seven other Blazers on Feb. 16 in the school round to advance to the D.C. round. "Maureen was amazingly strong," O'Connor said. All the students who had participated in school round delivered an un-coached, memorized speech selected from any Shakespeare play. After Raj was selected as the winner, O'Connor coached Raj for the D.C. round.

O'Connor said that Raj is "determined to compete again next year" and that she gained experience from the performance.

According to O'Connor, the winner of the D.C. round was Walt Whitman junior Christopher Carothers. Carothers will be going on to compete in New York for a trip to England.