Blazer Avi Silber, a junior, performed his rap song "Forecast" at the Sidwell Friends monthly Arts Guild in Washington, D.C. last Friday, Jan. 20. This was his third time performing at the event. 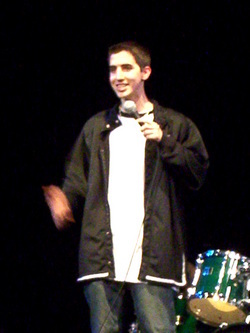 Silber, who began rapping over this past summer, has written seven songs and has recorded six of them. While Silber does not have long-term goals for his rapping career, currently he performs just "to have fun. It gives me confidence and spirit," he explained.

Sidwell Friends School, a private school in D.C., holds Arts Guild — an open-mike night for students — events monthly. Although the event normally consists of Sidwell students, Silber is one of the few non-native performers. "We encourage students from other schools to come and perform," said Sidwell Friends senior Michael Leibenluft, who was one of the emcees for the event.

Silber's music originally started as slam poetry and evolved to its current hip-hop form, inspired by daily life and current events. "There's a lot of drama. I needed to vent about things so I started to write," said Silber.

Much like many teenage artists, Silber's music is centered on political situations and personal beliefs. "I rap about important issues, like discrimination, homophobia, teenage promiscuity and teenage drug use," said Silber.

Silber hopes that his music will send a positive message to teenagers. "A lot of kids are screwing up their lives and they don't realize what's happening to them," explained Silber. Other songs of Silber's include "This Night" and "Ya'll Ain't Heard Me."

Silber posts his music on his Myspace .

The next Arts Guild will be held on Feb. 10 at Sidwell Friends School located at 3825 Wisconsin Avenue, N.W.
Washington, DC 20016

Meaghan Mallari. Meaghan Mallari is a CAP junior at Blair and resides in Takoma Park. In her free time she plays piano and soccer and is currently an independent girl scout. She loves to run and loves spending time outdoors relaxing in the shade and calm breeze. ... More »