After two weeks without competing, Blair's swim team found a special treat awaiting their return to the poolside today: Instead of the usual dual meet against a single school, Blair joined five of the county's top swim teams at the 2005 Division I Relay Carnival for a morning of intense, boisterous racing. Though the Blazers put up a good fight, they were only able to score 40 points through thirteen events, finishing the Carnival in fifth place.

Following a pattern that has been established for several seasons, the boys' and girls' teams swam very different meets at the Relay Carnival. Though several swimmers, both male and female, swam personal bests or otherwise impressive splits, the boys' team stood up well to the competition while the girls struggled to stay afloat in the pool of competition. 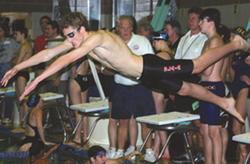 Photo: Freshman Sam Bullard-Sisken dives off the starting block into the pool as his teammate finishes at the Jan. 8 Relay carnival at Martin Luther King, Jr. Swim Center in Silver Spring.

Photo: Freshman Sam Bullard-Sisken dives off the starting block into the pool as his teammate finishes at the Jan. 8 Relay carnival at Martin Luther King, Jr. Swim Center in Silver Spring.

The Blazers never placed less than third in the four boys-only events, and senior Patrick Detzner, junior Tyler Wilchek, and freshmen Eddie Tang and Yang Yang captured Blair's only first-place showing of the meet in the 200 Boys' Breast. If only the boys' events had been scored, in fact, the Blazers would have earned 21 total points " trumped only by Walter Johnson's 22 -- and an impressive second-place finish.

While the boys' team was able to place in every single of its events, Blair's girls never broke fourth place in the Carnival's four female-only events, and they edged out B-CC for fifth place by only seven milliseconds in the 200 Girls' Free. The Blazers would earn another fifth-place showing in the 200 Girls' Breast and place last in the backstroke relay by a full eight seconds, earning Blair only eight points in the four girls' events -- less than any other team.

Though several of the teams present, such as Richard Montgomery and Walter Johnson, boasted female swimmers who could keep up with the other teams' boys, the lag between Blair's boys' and girls' squads put the Blazers at a disadvantage during the mixed relays. While both the boys' and girls' worked hard to overcome that disadvantage, it soon proved difficult to compete against more balanced teams. The Blazers took fifth in four of the five mixed events and fourth in the other - the 200 Mixed Back, in which both Sherwood and Walter Johnson's swimmers had been disqualified.

Though the Blazers' final score was not particularly impressive, Coach David Swaney nonetheless found plenty to be proud of at the Carnival's conclusion. "Our boys' breaststroke did great, and we had lots of really good individual splits,” he said with a smile. "My fear was that we'd get last,” Swaney added, "but we got fifth, so I'm not unhappy.”

The Blazers' next meet will occur at 10:45 a.m. on Saturday, Jan. 15. The team will be hosting the Sherwood Warriors at the Gaithersburg Aquatic Center.

Kristina Yang. Kristina Yang is 1/10 of the Blair girls' volleyball team. When not on the court, she most likely to be running away from Magnet math homework, trying to pay off her three speeding/redlight tickets, or feeding her bubble tea addiction. She would also like to … More »