Blair freshman Jacob Hurwitz won second place and a $10,000 scholarship at the Discovery Channel Young Scientist Challenge (DCYSC) – a nationwide science competition in which students compete for the title of "America's Top Young Scientist of the Year." Fellow freshmen David Tao and Scott Yu were also among 40 finalists in the competition. Tao and Yu also did well at the challenge, which took place from Oct. 21 to 25, winning the "Discovery Times 'Tech Trip'" award and the "Discovery Health 'Forensics Camp' award," respectively. 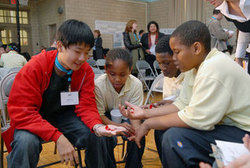 At the finals this week, Tao, Hurwitz and Yu participated in various events planned by the Discovery channel. On Sunday, Oct. 22, the projects were on display for the public at the Smithsonian Institution National Museum of Natural History in Washington, D.C. On Oct. 23 and 24, the finalists participated in six science challenges at the National Institute of Health (NIH) in Bethesda, and on Oct. 24, they participated in an outreach program at Ketcham Elementary School in Washington, D.C. to speak with third, fourth and fifth graders. That evening, awards were presented at the Discovery Channel building. 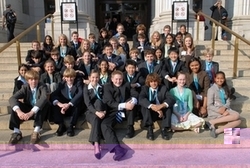 Photo: The 40 finalists pose for a picture at the beginning of Finalist Week 2006. photo courtesy of Discovery

Photo: The 40 finalists pose for a picture at the beginning of Finalist Week 2006. photo courtesy of Discovery

For Hurwitz, the whole trip was a rewarding learning experience. "It was amazing," he said. "It's great to be able to work with 39 brilliant young scientists from around the country." Tao, too, gleaned much from the competition. "The challenges were really fun and working with the top scientists in America was really great," he said.

To qualify for the DCYSC, students must first be nominated through an International Science and Engineering (ISEF) affiliated science fair. At Montgomery County's chapter of the ISEF, the Montgomery Area Science Fair, students who win first place in their category are automatically given entry forms for the DCYSC. From the pool of applicants, 400 are chosen as semifinalists in August and are narrowed down to 40 finalists in September.

In the 2005 DCYSC, no Blair students made it to the finals, but current sophomores Akimitsu Hogge and Sneha Kannan were among the 400 semifinalists nationwide.