Wrestler to advance at regional tournament 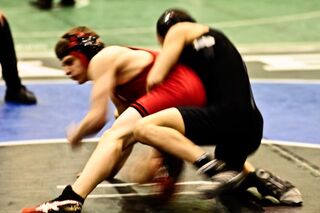 Athlete of the Week: Billy Saturno

Saturno's opponent in the final match was county champion senior Adam Pereira of B-CC, who Saturno beat 5 - 2. Seeded number 8, Saturno first had to wrestle in a pigtail match against junior Ben D'elia of Whitman to continue through the tournament. He then wrestled Einstein junior Jorge Villatora and Northwest senior Page Sevilla.

Of his matches, Saturno said that his match against Villatora stood out the most because of its intense third period. Though Villatora remained dominant for much of the match, with only 30 second left on the clock Saturno was able to pin him. Saturno's match against Sevilla was also intense, with Saturno winning in overtime 11- 9.

Saturno had wrestled several of his opponents previously throughout the season. Scott noted that wrestling familiar opponents was a huge advantage because they were able to anticipate their strengths and weaknesses. "We talked about a strategy for each person," Scott said. Saturno added that defeating these challengers provided for more motivation. "It was like payback," he said.

Saturno expressed extreme happiness with his championship. "It feels surreal," he said. Scott added that Saturno's determined attitude made him a very strong contender for first place. "He had a desire that most others didn't have," he said.

Meeks, who was seeded number six in the 152 weight class unfortunately fell in the first round against sophomore Cammeron Mayberry of Magruder 9 - 2. Meeks said that both physical but mental fatigue served as downfalls in his match. "Perceived pressure can cause you to not perform your best," he said. Scott also added that Mayberry was extremely aggressive and a formidable opponent for Meeks.

Though he expressed disappointment with Meeks's loss, Scott praised Meeks for his exemplary performance throughout the season. "He had a lot of pressure this season being the only senior," he said. "It's a huge challenge to lead a team, and I think he did a good job."

Saturno will advance to the state tournament this Saturday, March 6. Scott said that to prepare, they will continue to focus on the Saturno's same weaknesses and strategies. Saturno expressed that his outcome at the state tournament is largely unpredictable because of the high level of competition. "I am not really sure of what I expect," he said.

The state wrestling meet will be held Saturday at the Cole Field House at University of Maryland.