BlazerNet and BlairConnect blazing toward the future

Inside room 241, a small group of students gather on Tuesday afternoons, huddling around a line of black Dell computers. On the computer screens, green text glows against a black background as the students type the code of BlazerNet, code that takes the Internet from Blair to Blazers' homes.

With Internet access throughout Blair, BlazerNet, and another Blair organization, BlairConnect, are working together bring both computers and Internet access to Blazers' homes. While BlazerNet connects Blair students to the Internet, BlairConnect provides the computer. With nine subscribers and over 1000 computers distributed, BlazerNet and BlairConnect are on the way toward reaching their final goal: computers and Internet for not only all underprivileged students in Blair, but in all Montgomery County. "Our main goal is to get every student a computer, to fill in the digital divide," said Anne Wisniewski, coordinator of BlairConnect. By filling in the gap between privileged and underprivileged students both groups hope to improve the quality of education through computers. 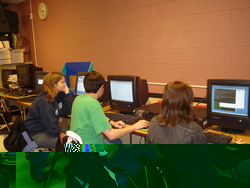 "For students and by students"

Started in 2001 by Blair alumni Noah Teske and Martin Katz, BlazerNet is still a student-run organization that provides a free Internet service to students who cannot afford Internet access on their own.

For four years, BlazerNet has been a little known part of Blair. This year, in a push to make Blair students aware of the service BlazerNet offers, the small group of six student organizers began to advertise. On the main BEN page, a Blazer proudly declares, "Register for BlazerNet, the free Internet service provider for students and by students." The Blazer links to the BlazerNet homepage, where one click takes an interested student straight to the simple registration form.

Provided the students have a computer and modem, a BlazerNet account will be emailed to their BEN account. For first-time internet users, a new account may be a daunting prospect, but BlazerNet has come up with several ways to help. A step-by-step instruction guide is available from the website (accessible by new users from school). BlazerNet president Kevin McGehee has found that many of the accounts given out are not used or used rarely. Thinking that this disuse may be due to problems users have with the service, a voicemail box was set up recently to answer additional questions users might have.

The students whose work goes into BlazerNet feel that providing low-income students with internet access closes the achievement gap. "If someone has access to these resources at home, they will do better in school," said McGehee. For students it is a great, and essential, research tool and with BEN, a way to keep track of school from home. According to Wisniewski, BEN's usefulness depends on its accessibility; if students can't access BEN, it can't help them. "It's hard to ask kids to use BEN when they don't have computers," said Wisniewski.

From computer one to computer 1053

Low-income students who cannot afford Internet typically cannot afford a computer either. Tucked away on the side of the IMC, a room labeled "Head In" has the answer. The "Head-In" room is the headquarters of BlairConnect, Blair's computer giveaway program that provides the computer to go along with the Internet. BlazerNet has partnered with BlairConnect to provide both a computer and Internet access. BlairConnect also relies on student help to get its work done. In 2000, a group of students worked with Wisniewski and John White, an adult volunteer who had fixed computers at old Blair. When Blair moved to its new building, old computers were no longer wanted, so White was able to help BlairConnect begin. He and a group of students led by Jesse Kovach combined their efforts to refurbish old computers donated to the program, getting them ready for their new owners.

Every year, BlairConnect gives out between 400 and 500 computers. Currently, they have given out 1053 computers. Every month or so, when they gather enough computers, they hold a giveaway event, where students come to Blair and leave with their very own computer.

Unlike BlazerNet, BlairConnect does not advertise, because "we want to get the kids who sincerely want a computer," said Wisniewski. Instead, they spread the word through teachers, administrators and target programs such as SPARC and ESOL, where students are more likely to be in need of a computer, said Wisniewski. They started by handing out PS2s, which Wisniewski described as "ancient pre-Pentium."

Nowadays, nothing more primitive than a Pentium 3 processor is given out. The computers can come from private donations but primarily originate from MCPS or private corporations, such as Marriott, which has donated more than 500 computers over the course of the program.

The most noteworthy donation came from Martin Marietta, Wisniewski recounts, remembering the trucks that came to unload the computers, "I had a company send up 2 skids of computers. They were the best computers," said Wisniewski. This donation of about 50 computers also traveled the farthest distance, all the way from Mississippi.

Not all the computers are of the same quality as the computers from Martin Merietta or Marriott, which is the reason BlairConnect has to fix up some of the computers before they are given away. According to Wisniewski, it costs around $10 to refurbish each computer. With new options in connecting to the internet, the price of modems has decreased, from $12 to $14 when BlairConnect began to $4 today.

Yet, the availability of other ways to connect to the Internet is beginning to threaten the availability and usability of 56k modems. According to Wisniewski, BlairConnect had some troubles when the family receiving the computer only had a cell phone. As broadband and cable connections replace modems and cell phones replace phone lines, Wisniewski is not sure how BlairConnect will be able to adapt. "It's hard to have a long term plan for technology since it moves so fast," she said.

The process of receiving a computer through BlairConnect is very simple. "There's no red tape involved. You just have to come and tell us you want a computer," said Wisniewski. All Blair students need to do is go to the head-in room at the back of the Media Center. If there are computers available, the student's name goes on a list for the next giveaway.

Computers are set aside for Blazers first, but students from other schools can also benefit from the BlazerNet. "We try to meet the needs of people at Blair first, but we do try to provide computers to other students too," said Wisniewski. Generally, they go to those in Maryland or even D.C., but Wisniewski said requests have come from as far away as Arizona, far outside the reach of BlairConnect.

Leftover magnet phone lines make BlazerNet possible. Users can dial up to one of the four Blair lines and then are connected to the Internet through the Blair server — the same connection that runs binx - explained McGehee. Binx is the computer that hosts BEN, Silver Chips Online and all Blair web pages.

In a world of high-speed DSL and cable connection a 56k dial-up connection may seem a little behind the times, but to those who have no Internet, slow is preferable to none. "It may be slow, but it's perfectly usable," said McGehee.

Using the Magnet phone lines is an additional plus; since the school pays for the phone lines anyway, BlazerNet can be operated at no additional cost to the school. Yet only four phone lines means that only four students can connect at a time. So far, this has not been a problem, since BlazerNet only has a few users, but it limits the number of accounts that can be given out. For now, the lines are satisfactory, since they are still in the "testing phase." "We're still trying to do a trial to prove that we can do it," said McGehee.

As far as McGehee can tell, the technology works, the accounts have been made and the Internet access is available; the only thing missing is the students.

The twenty-two accounts that have been given out haven't experienced much use; BlazerNet organizers are not sure why. The first accounts were given out at the end of last year, but never were used, and the users never contacted BlazerNet. "One of the biggest things is lack of motivation on the user's part. We've set up a help line as well as an email, but we haven't received much feedback," McGehee said, explaining that if the users don't give any feedback, he and the others will not be able to find or resolve any problems with BlazerNet.

The students who have tried to use the accounts have been having problems. Logging onto BlazerNet is not easy for students unfamiliar with computers. Junior Marvin Veliz-Santos, who received an account in December, has not logged on simply because he does not know how to get onto BlazerNet. Junior Robel Dejene did not even get that far. After sending an email to BlazerNet to sign up for an account, Dejene never heard back. "I was expecting an email from them," Dejene said. That email would contain a user name and password to allow him to use BlazerNet.

Although students have not used BlazerNet because of problems, they all believe that BlazerNet accounts will help with their schoolwork, a thought that meshes with the purpose of BlazerNet as an educational resource. Veliz-Santos tried to get an account "because I need to use it for homework and projects," he said. Much like Veliz-Santos, Dejene and junior Maria Hernandez also wanted the Internet to do research from home. "There are some things I need for research and email, which I need for projects," Hernandez said.

Looking toward the future

BlazerNet's eventual goal is to expand the service, providing Internet access not only for all Blair students, but all students in Montgomery County. This will require more equipment, more staff and more money; money that BlazerNet does not have. If they can prove the educational merit of the venture, they may be able to get support from companies such as Verizon or Cisco.

Currently, the staff is collecting statistical information from users to form such evidence that will get them the grant they need to expand their service. On Tuesday afternoons, BlazerNet members meet in the computer lab, write scripts to improve the user interface and webpage and think of how to improve BlazerNet. BlairConnect too continues its work fixing up and giving out computers so that one day, the lofty goal of with a computer and internet for every student will be met, and the "digital divide," if not closed, will at least be narrowed for the students of Montgomery Blair and beyond.