The girls' indoor track team scored 20 points to tie Damascus for eighth place, while the boys tied Springbrook with 14 points to place tenth at the 3A/4A West Regional meet. 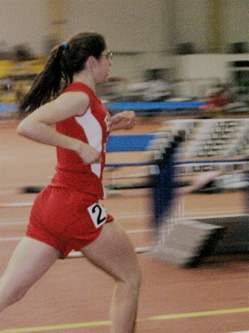 Photo: Senior Halsey Sinclair maximizes her stride during the 3200m run at the 4A West Regional meet.

Photo: Senior Halsey Sinclair maximizes her stride during the 3200m run at the 4A West Regional meet.

The boys' 4x200 meter and 4x400 meter relays continued their season-long success and qualified for the 4A Maryland State meet. Senior Ashlyn Sinclair will be joining the boys at the state competition in the 800 meter run, as will her twin, Halsey, in the 1600 meter and 3200 meter runs.

Senior Victor Mba-Jones led off the boys' 4x200 meter relay, taking the Blazers to fourth place in the heat of six teams. Junior Brandon Hudgins and sophomore Jonathan Haughton maintained fourth place with times of 24.26 and 23.60 respectively. Junior co-captain Louis Varella anchored the relay, surging ahead of Gaithersburg in the final 100 meters of the race to run a blazing 22.87 split and take the team into third place.

Varella expected the relay to place in the top three but was anxious before the race because Hudgins felt sick and threw up multiple times. "I was a little scared in the beginning because Brandon was throwing up," Varella said. 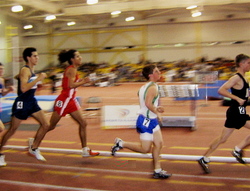 Photo: Senior Emanuel Waktola stays with the pack during the 3200m run at the 4A West Regional meet.

Photo: Senior Emanuel Waktola stays with the pack during the 3200m run at the 4A West Regional meet.

Ashlyn Sinclair placed third in the 800 meter race with a time of 2:20.53. Sinclair maintained a steady pace in fifth place up until the 600 meter mark before surging ahead to finish third out of 28 runners. Sinclair also competed in the 500 meter race but missed the qualifying time for the State meet by less than a second. The 500 was Sinclair's first race of the meet and Sinclair cited that she didn't feel warmed up enough for the event. "I needed to run something before it," Sinclair said.

Whitman's Morgane Gay took early control of the lead in the girls' 1600 meter race, but the battle for second was still a struggle between Halsey Sinclair and Churchill's Louise Hannallah. The two runners stayed close together at the beginning, but Hannallah picked up the pace 600 meters into the race to stay about 10 meters ahead of Sinclair. Wootton's Veronica Salcido caught Sinclair around the half-way point of the race, putting Sinclair in fourth position. Sinclair stuck close to Salcido and the two made their way back up to Hannallah. Sinclair made her move at the 1200 meter mark to pass into second position again, but with Hannallah only a step behind. The two girls ran the last 200 meters neck-and-neck before Sinclair outkicked Hannallah to claim second place in 5:12.98. Gay won the race in 5:02.78, Hannallah finished third in 5:13.99 and Salcido placed fourth with 5:18.42. 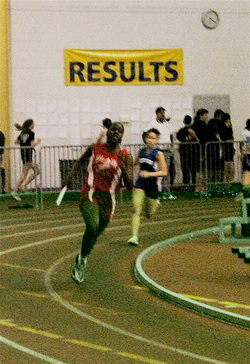 Photo: Sophomore Amber Seals strides a strong leg of the 4x200m relay at the 4A West Regional meet.

Photo: Sophomore Amber Seals strides a strong leg of the 4x200m relay at the 4A West Regional meet.

Sinclair's 3200 meter run was slower than usual because many competitors concentrated on qualifying for states without overexerting themselves. Snow days last week caused the regional meet to be rescheduled for two days before the state meet. Long-distance runners are hurt the most by insufficient rest in between meets and the two-milers seemed concerned with qualifying for the meet while using the smallest amount of energy possible. Sinclair stuck with a pack of four other girls who quickly separated themselves from the rest of the 23-person race. The pack passed through the first mile in 5:50 and began to spread out afterward. Sinclair placed fourth with a time of 11:42.12.

Head coach Mike Fleming was pleased with Blair's results at the regional meet. Fleming is excited about the team's prospects for the state meet and believes everyone advancing is capable of earning a top-three medal. "It'll be a battle to get one of those medals, but we can do it," he said.

The 4A Maryland State Championship meet is this Thursday, Feb. 22, at the PG Sportsplex.