Athletes from the indoor track team will advance to the 4A Maryland State meet in six events after finishing in the top four or meeting qualifying times at the 4A West Regional meet, held yesterday at the Baltimore Armory. The Blair boys also racked up enough points to finish fourth overall.

Blair's 4x200-meter and 4x400m boys' relay squads finished first in fields of 14 and 12 teams respectively, earning them a second-time trip to the indoor state meet. They will be joined by seniors co-captain Johanna Gretschel and Nilan Schnure, who qualified in the 800m run, and junior Jonathan Haughton, who qualified in the 55m dash and 300m dash. 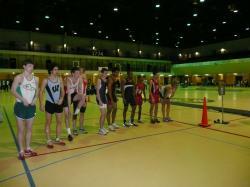 Photo: Senior Nilan Schnure lines up for the start of the 800m race.

Photo: Senior Nilan Schnure lines up for the start of the 800m race.

The Blazers started the meet well with strong performances in the 55m from Haughton and junior Keith Ayensu, who both qualified for the semifinal heat. Haughton went on to run a 6.7-second race and qualify for the final heat, where another 6.7-second split earned him fourth place overall.

Haughton returned in the next event – the 300m dash – with a time of 38.3 seconds, good for second place out of 25 athletes and another ticket to the state competition.

In the mid-distance events, the Blazers found success in the 800m run. After a disappointing seventh place finish in the girls' 1600m, in which she expected to qualify for the state meet, Gretschel returned for a photo-finish third place in the 800m. Her time of 2:29.6 seconds put Gretschel .3 seconds behind Montgomery County champion senior Leslie Morrison of Whitman.

In the boys' 800m, Schnure placed third in 2:06.9 seconds. After a strong start, Schnure fell back several places in the second lap, but managed to keep his pace to move back to third place in the final 400 meters.

The Blazers continued their season-long dominance in the boys' sprint relays, taking first place in the 4x200m and 4x400m races. Haughton started the 4x200m for Blair, taking the lead halfway through his leg and maintaining his position into the baton exchange. Senior co-captain Louis Varella, who returned after ankle problems forced him to sit out of the Montgomery County Championship meet, kept the Blazers in first place, but only a few paces ahead of rival Richard Montgomery. In the third leg, senior Chris Grindley expanded the gap and put the Blazers into a dominant first-place position before handing off to senior Mohamed Mansaray, who maintained Blair's lead for the win in an overall time of 1:37.2. 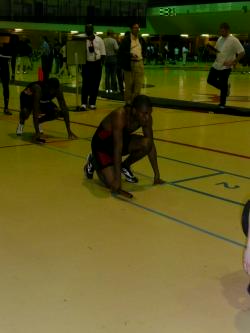 Photo: Junior Jonathan Haughton sets up for the first leg of the 4x200m relay, in which Blair placed first. Photo courtesy of Elaine Chung

Photo: Junior Jonathan Haughton sets up for the first leg of the 4x200m relay, in which Blair placed first. Photo courtesy of Elaine Chung

Richard Montgomery withdrew their team from the boys' 4x400m relay, but the Blazers faced tough competition from Linganore High School of Frederick. Haughton ran Blair's first leg, taking and maintaining the lead into the exchange with Schnure. As Schnure rounded the bend of the 200m track, Linganore caught up for a neck-and-neck handoff. Grindley and Linganore kept pace with each other, sprinting the straightaway for another close exchange. But Varella's anchor-split of 55.13 seconds put him in the lead by several meters at the halfway mark – a lead that he maintained for a first-place finish and overall time of 3:44.0, .7 seconds ahead of Linganore.

Many athletes ran slower times than usual because of the Baltimore Armory's track, which has a wood floor much like a gym, making it hard for runners to keep traction on the turns. "It slowed us down but I think it slowed everyone down," Schnure said. Indeed, Blair's 4x200m and 4x400m times were 4.33 and 10.37 seconds slower than the relay times at the Montgomery County Championship meet on Jan. 23, in which Blair's 4x200-team placed a close second and the 4x400-team won.

Assistant coach Mike Fleming went into the meet expecting several athletes to qualify for the state competition and was pleased with the overall results. "We will simply try to duplicate what we did tonight [at the state meet]," Fleming said.

The 4A Maryland State Championship will be held Tuesday, Feb. 19 at the PG Sportsplex.